iOS 8 is about to be unleash on the world today after debuting earlier this summer at WWDC. Tim Cook is calling it the biggest iOS update ever and for good reason, as the new OS has been packed with hundreds of new tools for developers, as well as new features that make iOS devices, quicker, more productive, and more seamlessly integrated with Mac than ever before.

You won’t see huge visual changes like Apple made with iOS 7 last year, but there’s plenty of features for everyone to be excited about in iOS 8, whether its the new messaging tools, improved camera features, family sharing, Hand-off, or the sleek new Spotlight.

Before you jump headfirst into the biggest iOS release ever, get acquainted with the most important new features in this Cult of Mac guide to iOS 8:

HealthKit is Apple’s answer for the wave of wearable fitness devices that sync with your iPhone. The Health app compiles all of your favorite fitness stats in one easy to read application – heart rate, blood pressure, weight, activity, calories consumed and more.

Mayo Clinic and a host of other medical companies are onboard with the HealthKit to give patients better care so your doctor can keep tabs on your lazy ass from the comfort of his office and share it with other doctors – as long as you give him permission of course.

Popular camera apps like VSCO and Camera+ have had separate focal and exposure points for years, but Apple is finally adding this feature in iOS 8. Tap where you want to focus and you’ll see a light icon next to the focus box that you can slide up and down to adjust.

Custom keyboards are landing on iPhones and iPads this fall after Apple finally decided to give users more options than Jony Ive’s horrible shift key. To get a third party keyboard on your iPhone, first you’ll have to download the app from the App Store. Once you’ve installed a keyboard app on your device, you can add it to the system-wide keyboard the same way you toggle the emoji keyboard on/off. 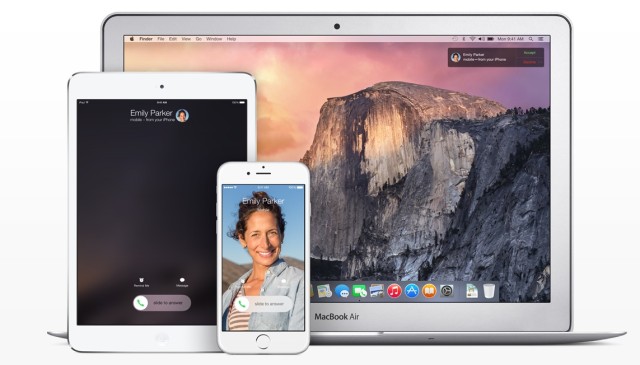 iOS 8 and OS X Yosemite were designed to work closer together than ever before with the addition of Continuity, which bridges the gap between iOS apps and Mac apps by allowing users to seamlessly transition from their Mac to their iPhones. With the new Handoff feature, users can start writing a paper in Pages on their Mac, and then have it sent over to the iPhone for finishing.

Along with new editing features that give users more control over exposure, shadows and color, Apple is making the Photos app better by adding the ability to search based on location, time or albums.

iCloud Photo Library ensures all your edits are automatically synced between devices. You can favorite photos to keep track of your best ones and if you don’t have enough storage Apple will boost you up to 200GB for $3.99 a month or $0.99 a month for 20GB.

The popular tab view from Safari for iPhone has been ported to the iPad, but you’ll never have to hit the Tab View button again thanks to a new quick toggle gesture that can be triggered with a two finger pinch on any webpage. Apple also added a new Sidebar that slides out to reveal bookmarks, reading lists, and shared links. 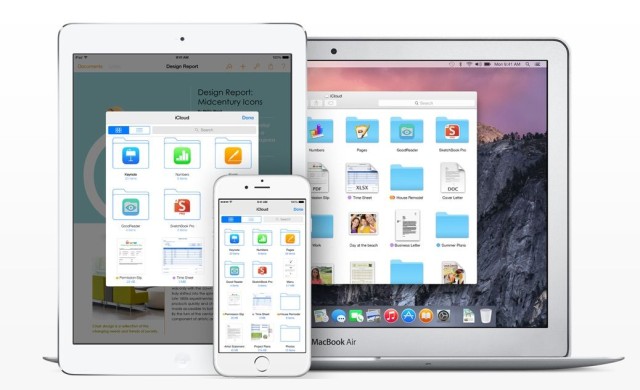 iCloud Drive makes its debut on iOS 8 as a way for users to store documents, pictures, spreadsheets and more within iCloud. It pretty much works like Dropbox and you can now access the iCloud Drive file structure from your Mac or iOS device.

Snapchat, Whatsapp and every other disappearing messaging service were put on notice with some huge upgrades to iMessages today that add the ability to not only send quick video and voice messages, but also the option to make them expire.
iOS 8 adds a new Tap to Talk feature that lets you share video and photos with a simple gesture. Annoying group messages are a thing of the past now too with the option to leave a conversation, label threads, add/remove contacts mid-convo, and the option to add DND to specific threads.

Got a ton of apps you wanna share with friends and family without giving them your iTunes ID info? Apple’s new Family Sharing lets you share your apps with up to 6 different people so they can enjoy all your apps without buying them on their own.
The feature ties your credit card to their account, but don’t worry about kids going on a spending spree. iOS 8 will ask you for permission to download apps so your toddler doesn’t run up a high bill.

One of the most welcomed additions in iOS 8 is the overhaul of the App Store with new searching features, more categories to pinpoint what you want, and endless scrolling on search results.

Developers also get the ability to make video previews of their apps so you get a better idea what you’re buying, and if you’d like to test new apps, the new TestFlight feature gives devs the ability to send you access. Oh, and there’s finally going to be App Bundling so you can score big deals on a handful of apps at once.

QuickType makes sending text messages a lot faster by predicting which words you’re about to type, so you can jump to the next word. The feature can be toggled by swiping up on your keyboard, or you can press and hold the emoji icon to bring up the updated Predictive keyboard toggle.

iOS 8 is full of tiny tweaks as well. Notification Center now lets users reply to messages from the NC panel. The camera app picked up the ability to set separate focus and exposure points. Handoff will let you seamlessly start a project on your iPhone and finish it on your Mac.
Touch ID can now be used with third-party apps so you never have to enter your password again. Siri can now be pulled up just by saying “hey Siri,” rather than pressing the homebutton. Phone calls can be answered from your Mac, and AirDrop is now compatible between iPhones and Macs.

Siri receives a number of new upgrades in iOS 8, including the ability to to purchase iTunes items. When users compose a message with talk-to-text in Messages, Siri now dictates talk-to-text live as you’re speaking, so you know when she’s garbled a word like “areolas”. You can also find the feature on the main Siri screen.

Searching for content with Spotlight is now quicker than ever, and it pulls from new sources like the internet, iTunes, nearby locations and others. 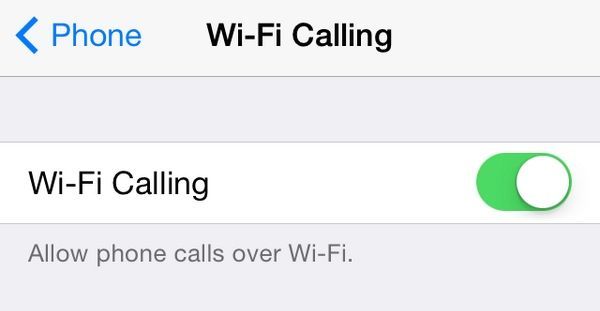 Say goodbye to your beef monthly minutes plan. iOS 8 introduces calling over WiFi, and while not every carrier is supporting it out of the gate, T-Mobile beta testers have been enjoying it for weeks and AT&T says it will rollout support starting in 2015.