Tim Cook stepped up as the CEO of Apple on August 24, 2011. The soft-spoken Southerner, who has worked at the Cupertino company since 1998,  had previously acted as interim CEO when Steve Jobs stepped down to battle cancer.

Cook’s ascent to the permanent CEO position marked a sea change for Apple. Once called the stage manager to Jobs’ star, he’s now running the show. After endless speculation about whether Cook’s rule marked the end of Apple or signaled a bright new era, going by the numbers, it looks like he’s earned a solid B. 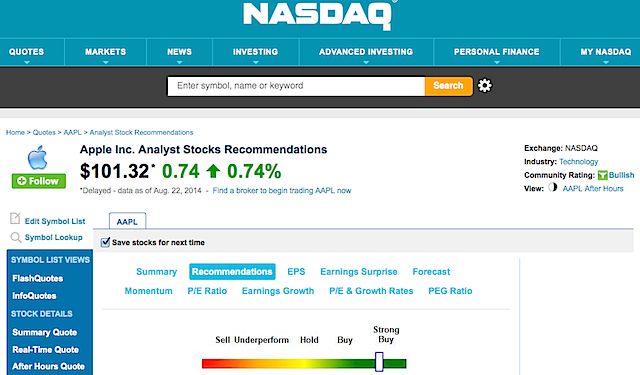 There are dozens of financial metrics to evaluate a company – we’re going to sum that all up with whether you should own stock in it. The answer from the experts who crunch the numbers on revenue, earnings, profit margins, etc. is, uh, yeah. Get a piece of Apple.

Morningstar, which rates Apple stock 3/5 stars, notes that the maker of all iThings has far outperformed the industry average in the last three years. After the 7-1 stock split in June, stock price soared past the previous record just in time for Cook to celebrate his anniversary running the company. If Cook missed the mark by any measure, it may be that his knack for innovation is still in question.

“So is Apple making an impact? I’d say they are sustaining their position rather well and if that’s all there was, Tim Cook deserves a B,” industry analyst Horace Dediu told Cult of Mac. “But to be truly impactful still requires a successful new product that “makes a dent in the universe” which has not happened in the last few years. In that sense, he has not yet completed his thesis and the grade today is therefore an Incomplete.”

Less than a decade ago, Greenpeace singled out Apple as one of the least environmentally friendly tech companies on the planet. Apple has since turned over a new leaf, embracing environmentalism as something every bit as central to the company as the latest iPhone. Cook underlined this when he spoke about Apple being a “force for good” during an earnings call this year.

“Previously Apple would have scored a D in environmental responsibility,” Elizabeth O’Connell, campaign director for Green America, told Cult of Mac. The 80-strong group of environmental and human-rights organizations fired off a 17-page letter to Lisa Jackson, Apple’s vice president of environmental affairs, back in June as part of its “Bad Apple” campaign. Some 23,0000 signatures later, Apple responded that it would stop using those harmful chemicals in the iPhone manufacturing process.

“In the past few years, Apple has instituted policies to reduce its corporate facilities’ reliance on fossil fuels, make its products more energy efficient, reduce the amount of toxins in its products, and make it possible to easily recycle old Apple products at Apple stores — earning Apple a B- for environmental responsibility,” she says.

O’Connell adds that, while Apple has made “significant progress” on environmental issues under Cook and with Jackson, there’s still much room for improvement.

To improve its “grade,” the company still needs to reduce its carbon footprint at manufacturing facilities (where the bulk of its greenhouse gases are emitted), reduce the amount of toxins used in manufacturing to protect workers and design its products for longer use and easier repair.

In 2012, when The New York Times dug into the dangerous factory conditions in China, things looked grim. The Gray Lady unearthed stories of workers getting killed and maimed in the process making of iPhones. Cook didn’t respond effectively to the accusations, with a leaked memo showing his frayed temper. “Any suggestion that we don’t care is patently false and offensive to us. As you know better than anyone, accusations like these are contrary to our values. It’s not who we are.” And while the worker’s rights reports that Apple has been publishing since 2007 have shown improvement in these conditions, it’s just not enough.

“Apple still earns a D for worker rights — both overseas and at their retail stores in the United States,” O’Connell says.

Under Tim Cook,  acquisitions at Apple are up 64 percent. The $3 billion paid August 1 for Beats Electronics dwarfs the rest of the companies Apple has taken into the fold. Many questioned whether the company’s move was a wise one. It’s definitely a bold move — the company’s largest acquisition ever — but because of Apple’s “healthy cash and investments balances” the buy won’t “strain Apple’s liquidity” or knock down its Moody’s Aa1 rating. The investor’s service expects the buy to bring “modest revenue growth opportunities” for Apple, too, including a future in wearables and in-home tech markets.

Cook is definitely setting a new pace for acqui-innovation at the company, where buys include everything from AlgoTrip (data compression) to Topsy (analytics) and Swell (music streaming). These types of deals set the rumor mill aflame with speculation about what Apple will be cooking up next. There have been criticisms of the piecemeal nature of these buys, but the CEO maintains there’s a strategy behind it. “We generally do it for skills or IP [intellectual property],” Cook said at a 2013 conference.”And we generally move the skills to work on something else.”

Cook’s highest “grade” on this hypothetical report card may come from Apple employees. Though the lanky 53-year-old is reportedly short on small talk, his people skills have earned him a 93 percent approval rating from a sampling of almost 2,000 people who work at Apple on website Glassdoor, where anonymous employees can rate their satisfaction with the overall work environment as well as give thumbs up or down for the CEO. If the brightest minds in tech want to work with him, that may be all the insurance Apple needs for a bright future.

“In my opinion the measure of a technology CEO’s performance today would be their ability to retain and incentivize talent,” analyst Dediu says, adding that it’s not so simple to dole out report cards to CEOs like we do for second-graders. “Talent is far more difficult to obtain and retain than capital or property. The basic question of number of employees and their willingness to devote so much energy to their company is at the heart of sustainable growth.”