Not a year goes by without NFC rumors trying to steal the spotlight during iPhone rumor season, and while this year has certainly been no exception, leaked schematic details reveal NFC might actually land on the iPhone 6 this year.

An alleged bare logic board for the iPhone 6 was the first hard evidence that NFC really is coming to the iPhone 6, but now a Chinese repair firm has found what it claims to a wiring schematic specifically for the iPhone 6’s NFC chip. 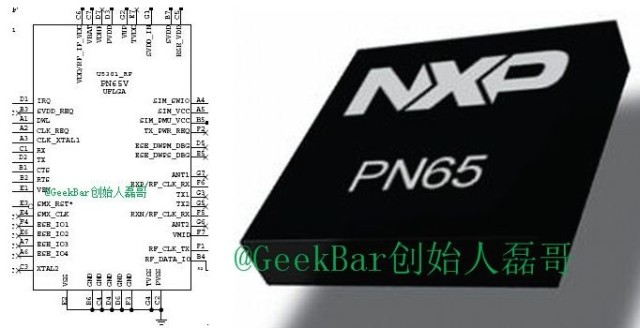 According to GeekBar, the iPhone 6 will use a PN65V NFC chip similar to what’s been used by Sony, Samsung and others, in many Android handsets. The NFC chip is supposedly being supplied by NXP Semiconductors which also makes the M7 co-processor in the iPhone 5s.

GeekBar has a mixed reputation with iPhone leaks and while we can’t verify the authenticity of the leaked schematic, the PN65V ship does seem fairly straightforward. However, GeekBar botched a RAM leak for the iPhone 6 earlier this morning, claiming it would only have 1GB of

The addition of NFC to the iPhone 6 seems like an odd addition considering Apple could have easily added it since the iPhone 3GS. NFC plays a vital role in a number of mobile payment systems like Google Wallet, and while Apple has been eager to rely on Bluetooth LE, it is possibly that Apple wants to add NFC for its own mobile payments system that is rumored to debut with the iPhone 6.