Anand Sharma has eaten 17 burritos in the last 141 days. An avid runner and rock climber, the San Francisco-based designer has visited parks seven times this month. He weighed 153.9 pounds and was at 18.4% bodyfat after his 5.5-mile run yesterday. He burned 688 calories during that run.

He gets around a lot, too: On July 15, he flew from Hong Kong to Changi, Singapore. Then he grabbed a bite at the Kampong Glam Cafe. He also spent 94 minutes in a car and 70 minutes on the Lomprayah high-speed ferry that day. During his long day of travel, his heart rate hit a high of 94 and a low of 66 (averaging a slightly higher than usual 79). He didn’t share any photos on Instagram, but he pushed 25 commits to code-sharing site Github.

Sharma, who was 24.382007813 years old as of this writing, is already the most transparent human being on Earth, and he’s just getting started. Fully embracing the data-hungry demands of the quantified-self movement as well as the constant spotlight of social media, he routinely shares every little detail about his life, from his travels and meals to his vital signs and work, on the slickly designed April Zero website he launched last month. Now he wants to invite you to his way of life. He’s working on a new app that will make it easy for anyone to have their own version of April Zero.

Cult of Mac talked with Sharma about April Zero, the benefits of living in public, and the possibilities of Apple’s long-rumored health-centric wearable.

(Editor’s note: The following interview has been edited and condensed for clarity.)

Cult of Mac: What made you create April Zero? How did it begin?

Anand Sharma: I was working on a redesign of my blog. It was going to have a small area with some real-time stats about myself that I had started to collect, like my heart rate. But as I started to collect and play with that info, I started to think that it was really fascinating stuff. When I realized that all this stuff was on my phone and I could easily upload it and generate it on the fly just by living life and going out and doing things, I got really into that idea. I started in March. A lot of these apps just recently came out or got good enough to do this stuff, so it was good timing.

CoM: Tell me about some of the apps you use and what technology has made it possible for you to do a project like this. I’m assuming that the iPhone’s sensors probably help a lot?

Sharma: There’s a lot of stuff that circles around the phone. And there’s a few other things I have that are supplementary, like a Withings Wi-Fi scale that I can just step on and add my weight. Most of it’s from my phone. I have a 5s. One of the biggest apps I use is Moves. That tracks my location automatically. I know a lot of people who have used Foursquare for a long time to manually check in everywhere, but I don’t want to have to take out my phone when I get somewhere. There are a lot of apps that track your heart rate using basically just the phone’s camera and flash, which I think is pretty brilliant.

CoM: So you don’t have to enter a lot of data manually?

Sharma: Not much at all, which is kind of the point I think. I tried to make it so it wasn’t a big responsibility that needed me to do a bunch of stuff everyday for it to not fall apart. There is a lot of other cool stuff that I could be recording, but I’m kind of limited to what’s totally automatic.

CoM: Did you have to talk to any of the people behind the apps you’re using to get the data into the site?

Sharma: All of these apps have really good APIs now. The whole ecosystem has changed a lot. Five years ago, no one really had their data public and as a company you wouldn’t dream of allowing anyone else to use it. Now pretty much everyone realizes they’re part of a bigger ecosystem and there’s more value in letting users take data and connect it to other stuff. So that was a pretty painless process. It was much easier than I expected. There were no cases in which I had to contact a company and do some kind of business deal.

CoM: It’s crazy that it’s that easy to track and collate all that data.

Sharma: Yeah. There’s definitely a lot of cleaning up and work involved in formatting it the way I want. But it’s all there and relatively straightforward to access if you know what you’re doing.

CoM: You track almost everything about yourself and share it with the world. For instance, I can see that you went to Starbucks yesterday and what your pulse was when you went. Facebook owns Moves. Does the fact that you’re tracking all this stuff and freely sharing it freak you out?

Sharma: A lot of people ask me that, but it hasn’t really affected me that much yet. I hope it won’t and I won’t have a crazy stalker or something. I feel like most of this data I’m putting up is interesting because it’s personal, but it’s also pretty harmless.

“I think the interesting thing about this project is that it’s comprehensive. It’s literally everything, not selective.”

The fact that you know what my pulse was … you can’t really do anything with that. It’s not sensitive. I don’t think it’s that big of a deal that I’m giving up that privacy. I was at Starbucks yesterday, but if you were to go there today I wouldn’t be there anymore. If I was posting my calendar with where I’m going and my meetings, that would be more sensitive. But I think saying what I did is relatively harmless. I think the interesting thing about this project is that it’s comprehensive. It’s literally everything, not selective. On Facebook you only post one or two things that you think are important life events during the week, not every random thing.

CoM: Does the fact that everything you do and everywhere you go is going to be shared affect your decision-making? It seems like that way of living would change how someone makes decisions about where they go and what they do.

Sharma: I think it has subconsciously affected me. There have been some moments where I’ve been on the edge of doing something and I decide to do it because it would be interesting to document. I think the repercussions of the privacy aspect of all this will be interesting to see over the next year … whether it’s good or bad. A lot of people can see where I am. I was in Japan and a bunch of people saw it, but it was a few days after I left, so they wished I had told them I was going to be in town. But then it was too late. 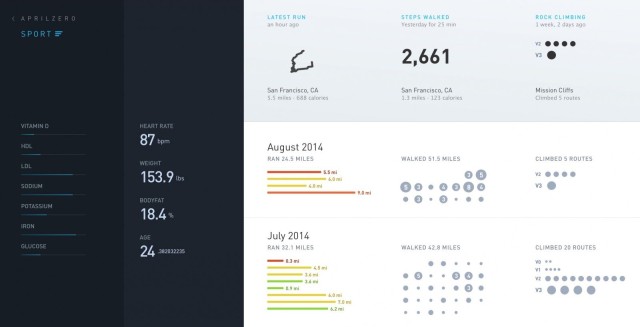 CoM: Have you been paying attention to iWatch rumors at all?

Sharma: A little bit. I try not to because I feel like most rumors are just rumors.

CoM: But I’m assuming you’ve read at least a little about it. Do you think Apple wants to make it easier to track all this stuff?

Sharma: I’m sure they want to, yeah. I think the question is whether the hardware is there that they can have a good solution around it. I’m really excited to see what they come out with because so far everything they’ve done has been great.

CoM: What would an ideal wearable look like and do?

Sharma: There are a few things I want. The biggest thing for me is that it has to give me something that’s more than what my phone is already doing. And that’s where everything already falls short, right? All these other products are basically mini phones with crappy heart-rate monitors, tiny screens for notifications, and stuff like that. I can do all those things on my phone already and probably better.

I would be interested in more rigorous medical stuff. Continuous heart-rate monitoring is something I’ve been wanting for a while, but it’s really hard to do well, especially on your wrist. So I’m curious how [Apple is] going to solve all of these problems when no one else has been able to. I want more data and sensors that are really good at medical-grade stuff that hasn’t been offered at the consumer level yet. I think that would be really cool and fit well with HealthKit. Most of this health data isn’t being generated right by anyone for tracking something like a serious condition. That’s the biggest thing I’m hoping for.

CoM: I’m sure something like that would make maintaining your site easier.

CoM: What are your plans for the future of April Zero? It looks like you’re going to be releasing a way for anyone to track their life like you’ve been doing.

Sharma: Originally I made this for myself, and I wasn’t sure if other people were ready for something like it. But after launching, there was a lot of demand for people wanting their own version. So last month I started working on how anyone could put in their data. That’s tricky, because everyone is going to have different activities they care about.

Sharma: Exactly. Obviously I can’t do everything, but I’m figuring out a list of maybe 10 things that are pretty comprehensive. I think the timeline aspect will be a big part of the experience for everyone. I still have a lot of stuff to do. I’ve put up a basic site called Gyroscope so anyone can put in their email address to sign up for updates that I’ll send out as [the project] comes along.

CoM: Are you going to charge for the service?

Sharma: I think I will charge. There’s a lot of stuff that ends up getting expensive in terms of hosting and paying for other APIs. Just mapping stuff is expensive, and there’s a bunch of other cool features I want to add. I think it will start off as a service that people can have as a monthly subscription. I haven’t figured it out fully yet. It will probably be a month or two until there is a beta that people can start using. It’ll start as a Web thing but a good iPhone app will definitely be a big part of the experience and something I want to work on afterwards.

If you’re interested in how Sharma made April Zero, check out his two-part description of the process on his blog (read Part 1 and Part 2). Also follow him on Twitter @aprilzero.