In 25 years, Timbuk2's product line has moved far beyond the messenger bags that made the company a leader in the industry. Photo: Jim Merithew/Cult of Mac

Timbuk2 cranks out bags to order from this San Francisco factory. "This is where the magic happens for all the custom bags," says Noel Kopp, the company's social media manager. Photo: Jim Merithew/Cult of Mac

A worker sews the Timbuk2 label into a custom bag during the assembly process. Photo: Jim Merithew/Cult of Mac

Custom bag buyers can specify the color of the Timbuk2 "swirl" icon that will be stitched on their bags. Photo: Jim Merithew/Cult of Mac

Michael Chan, who has worked at Timbuk2 since 2000, listens to Chinese radio as he precuts the fabric for custom bags using an Eastman Blue Streak II machine that works like a saw. Photo: Jim Merithew/Cult of Mac

You've got to bust out some thread if you're going to make some bags. Photo: Jim Merithew/Cult of Mac

Timbuk2 CEO Patti Cazzato points out that manufacturing in a city like San Francisco is expensive due to higher real estate and labor costs, but it's part of the company's DNA. "We own our factory," she says. "We operate our factory. It's part of our corporate headquarters." Photo: Jim Merithew/Cult of Mac

A large gong hangs in the front section of the Timbuk2 complex in San Francisco. It's used to signal the start of all-hands meetings, birthday parties and mealtimes catered by the company (every Tuesday is "make your own sandwich day." Photo: Jim Merithew/Cult of Mac 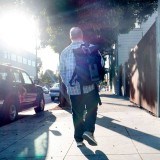 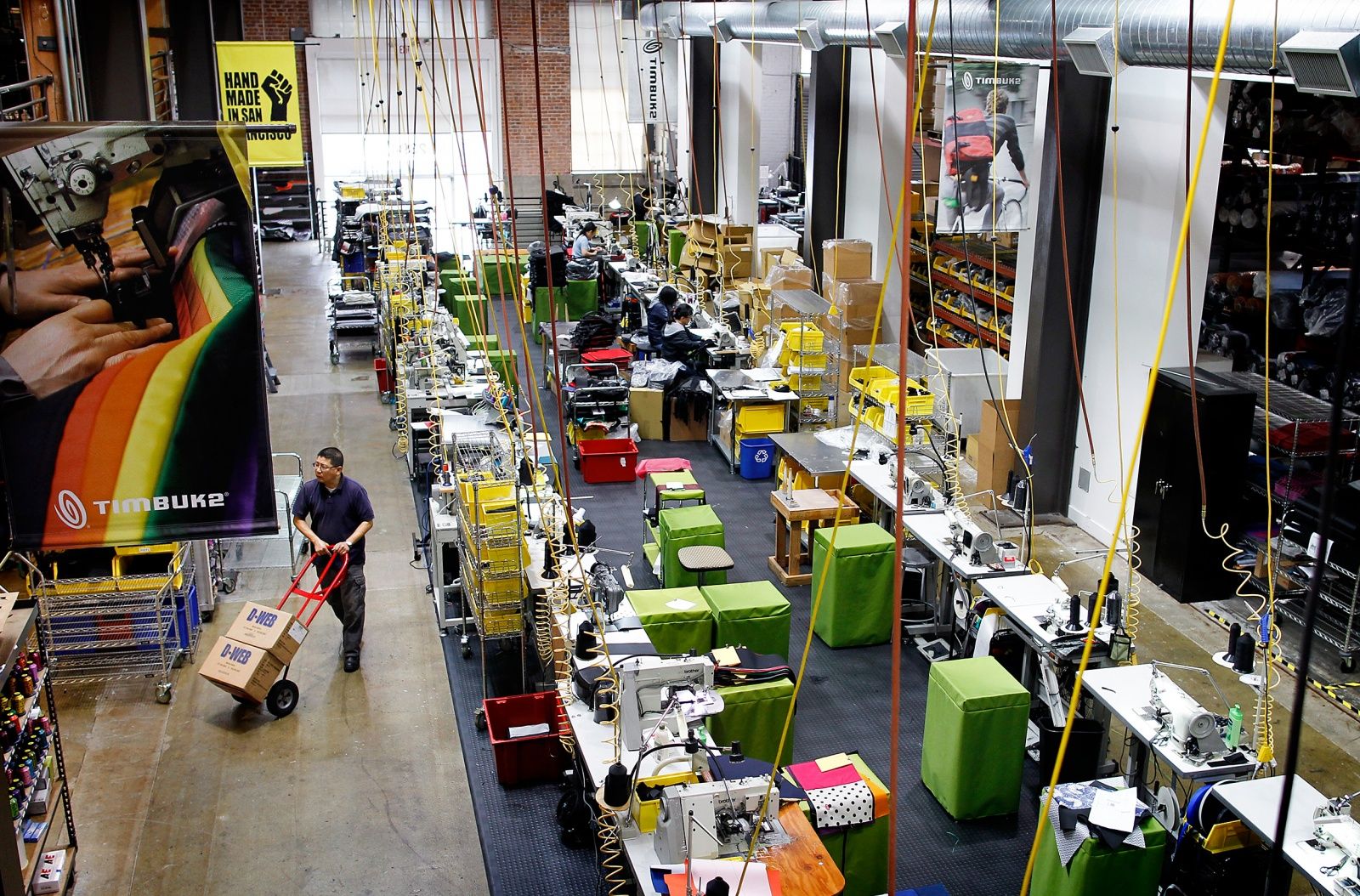 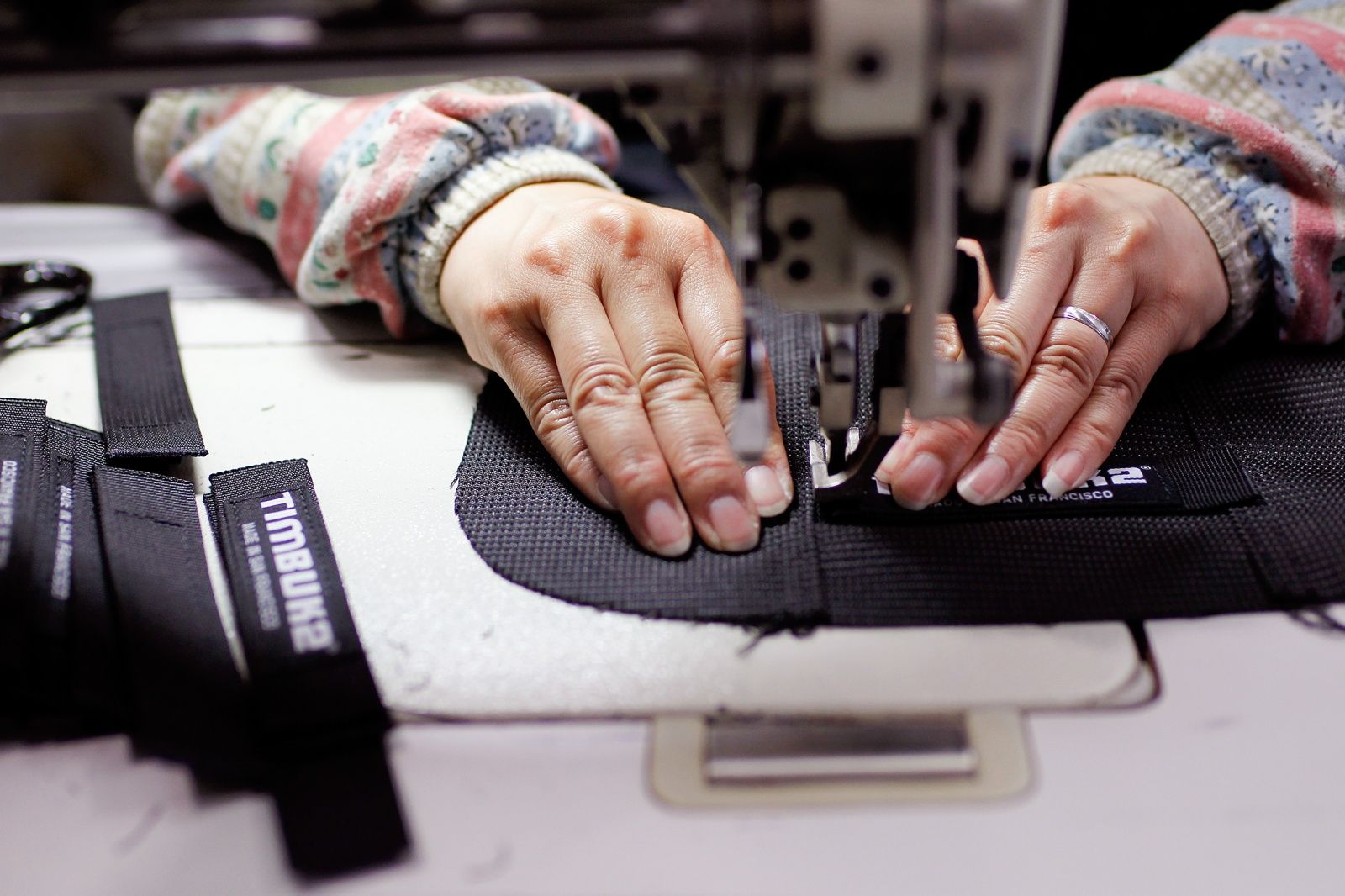 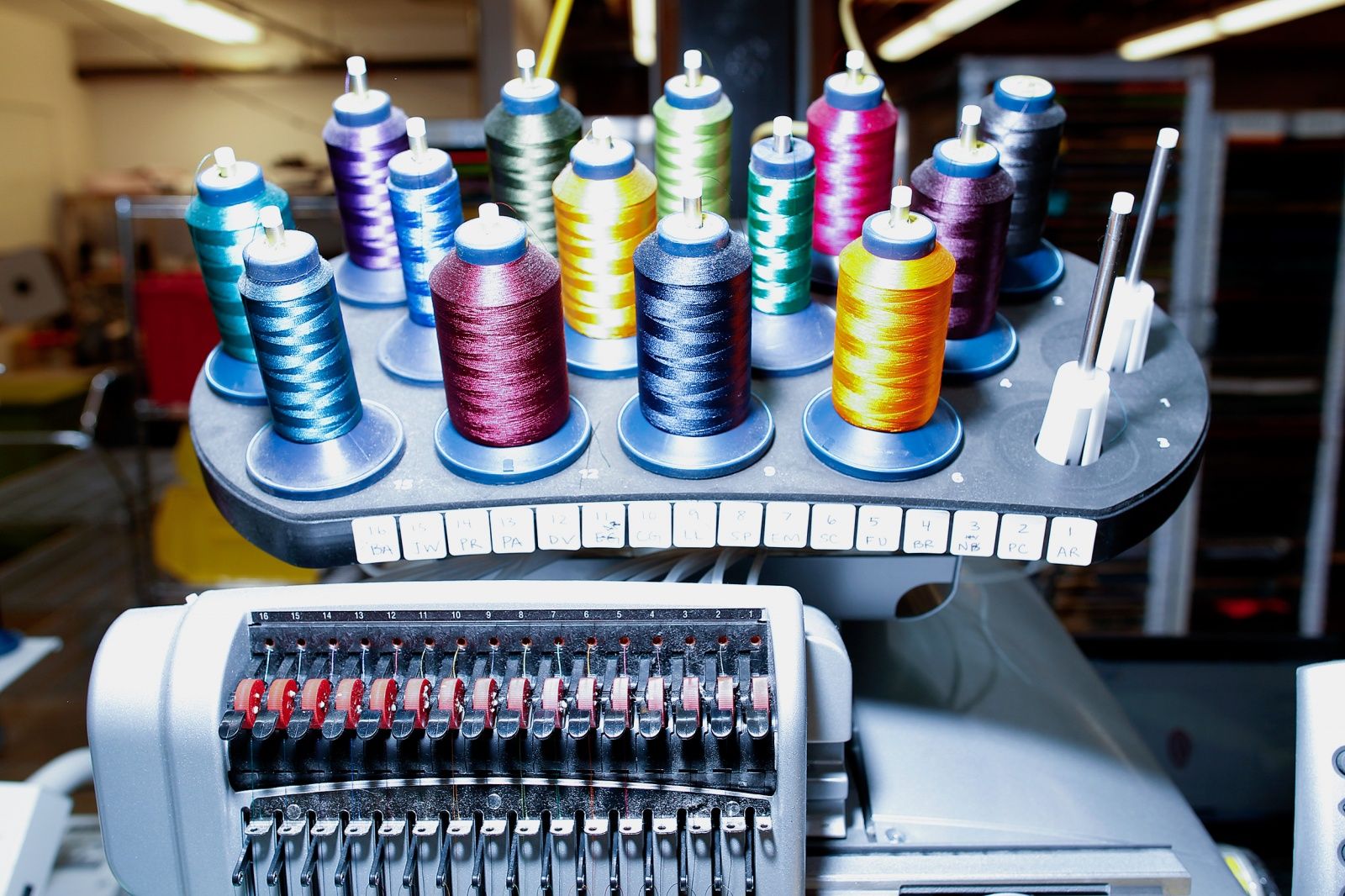 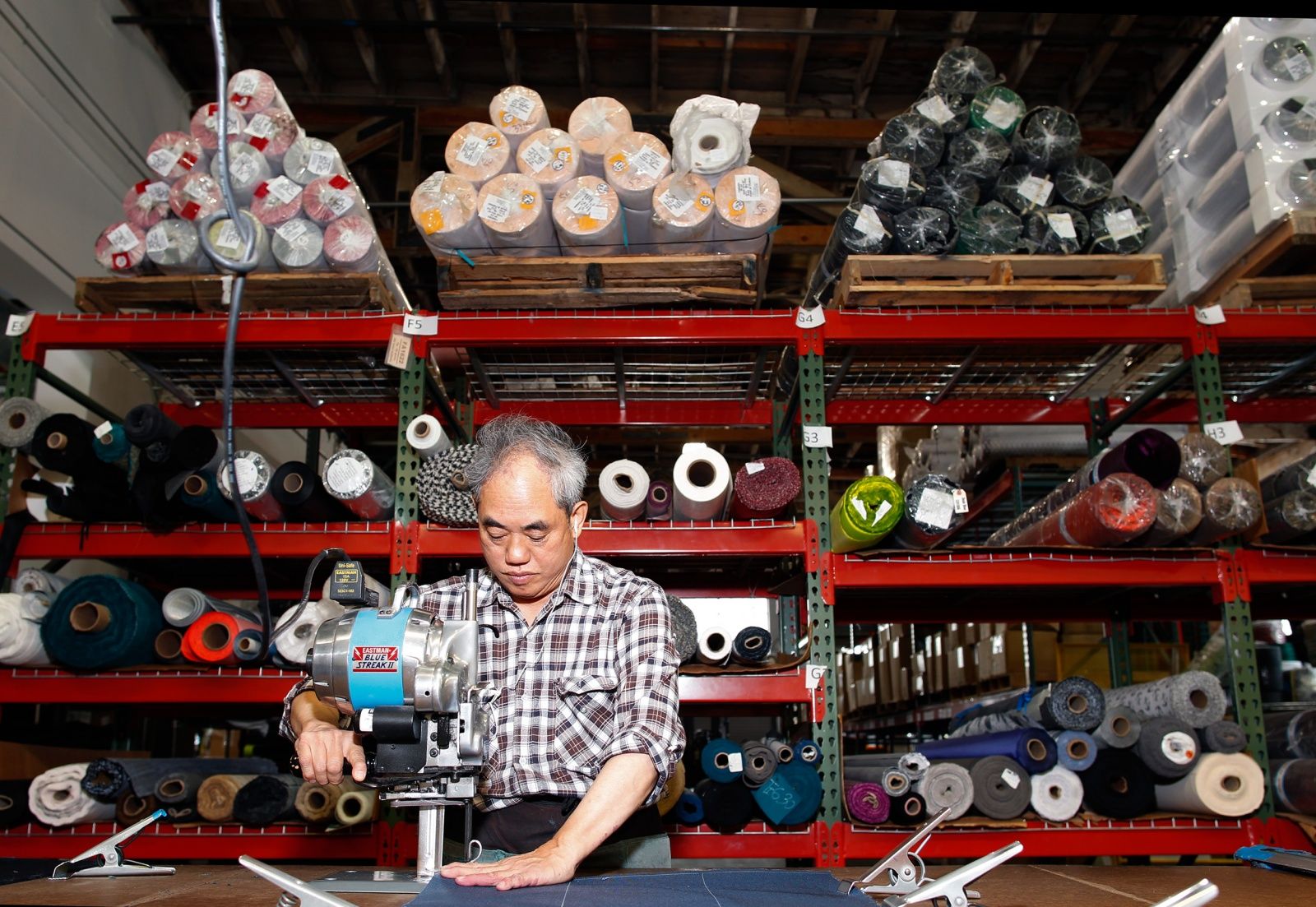 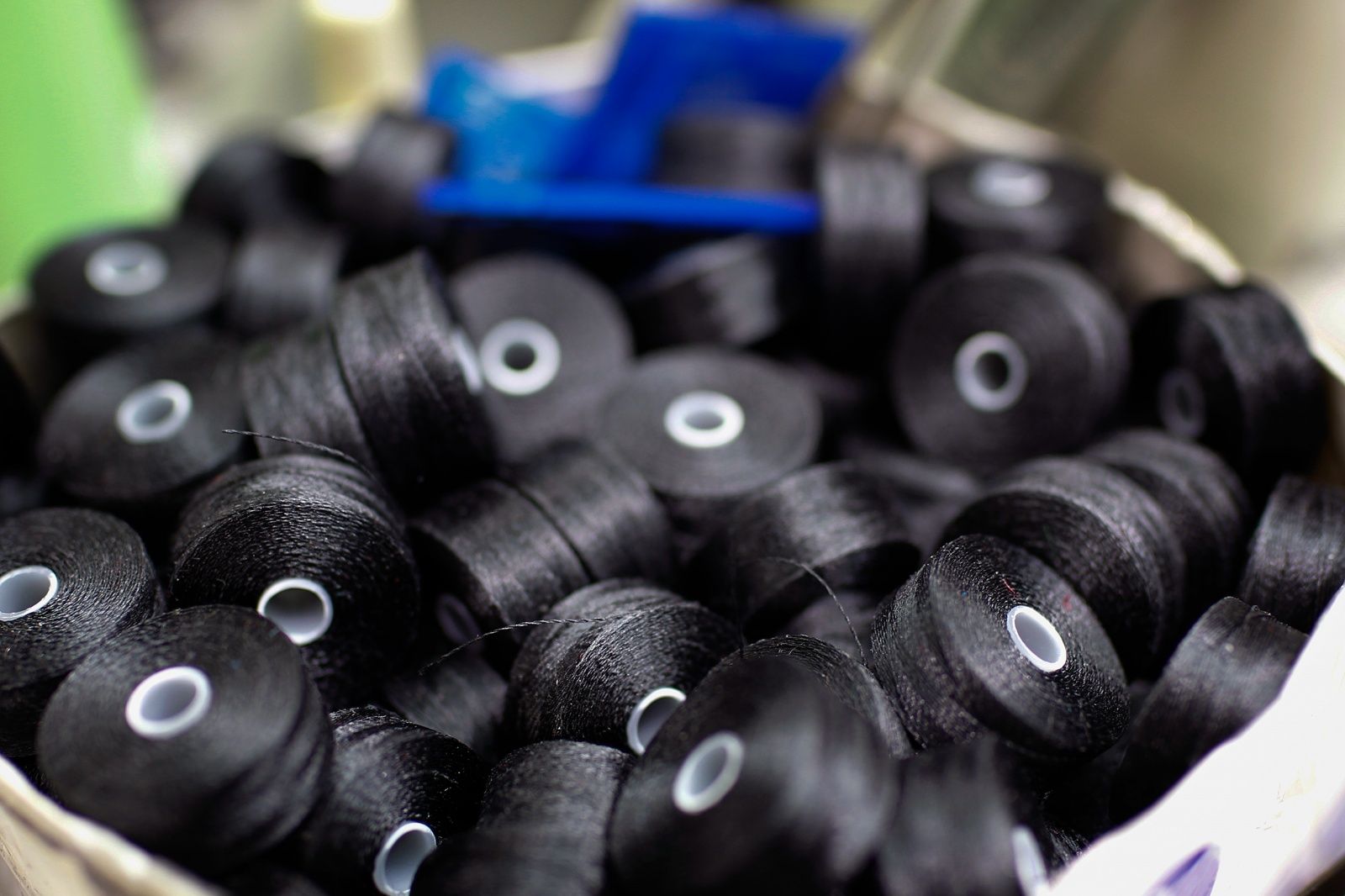 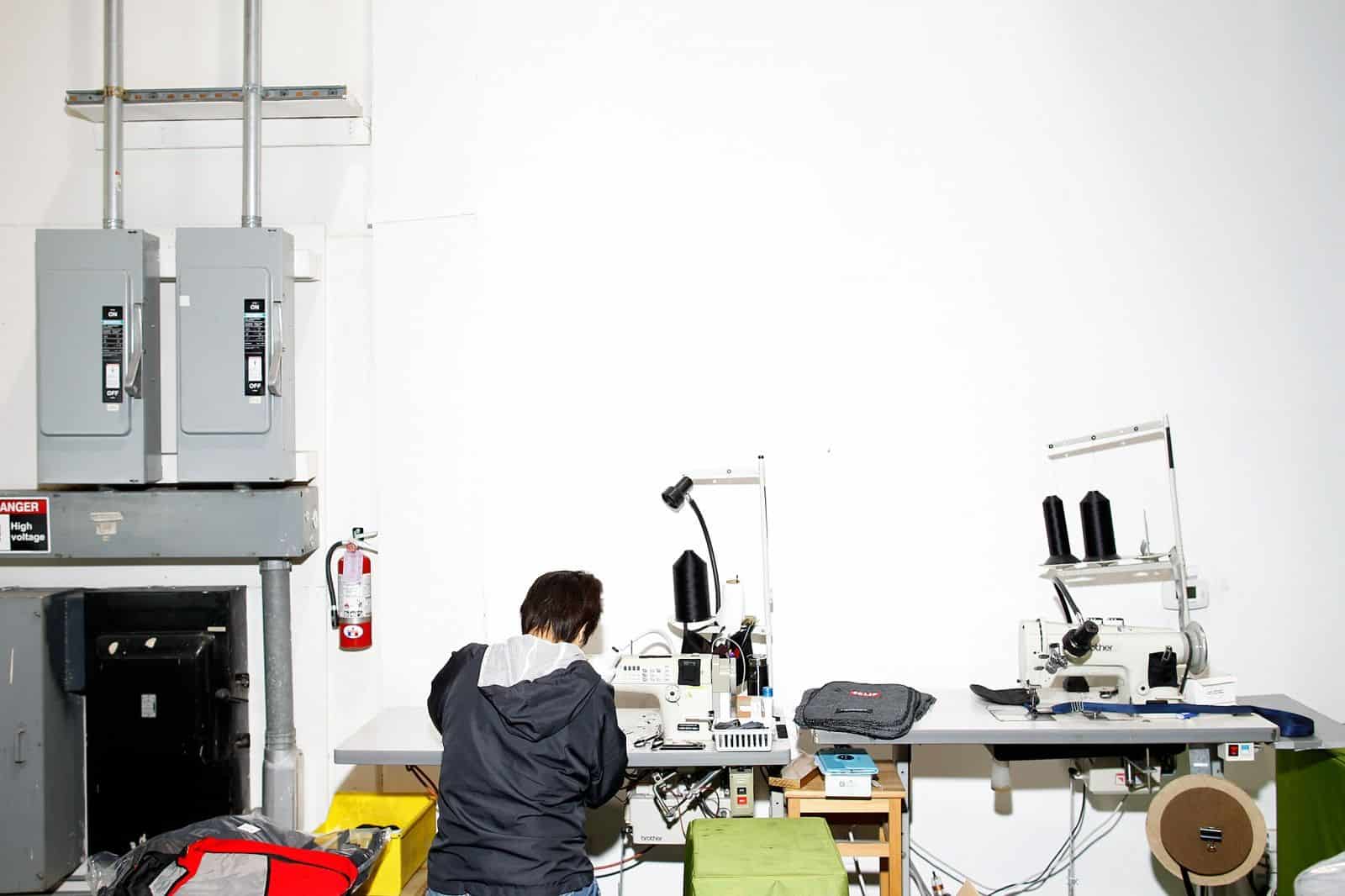 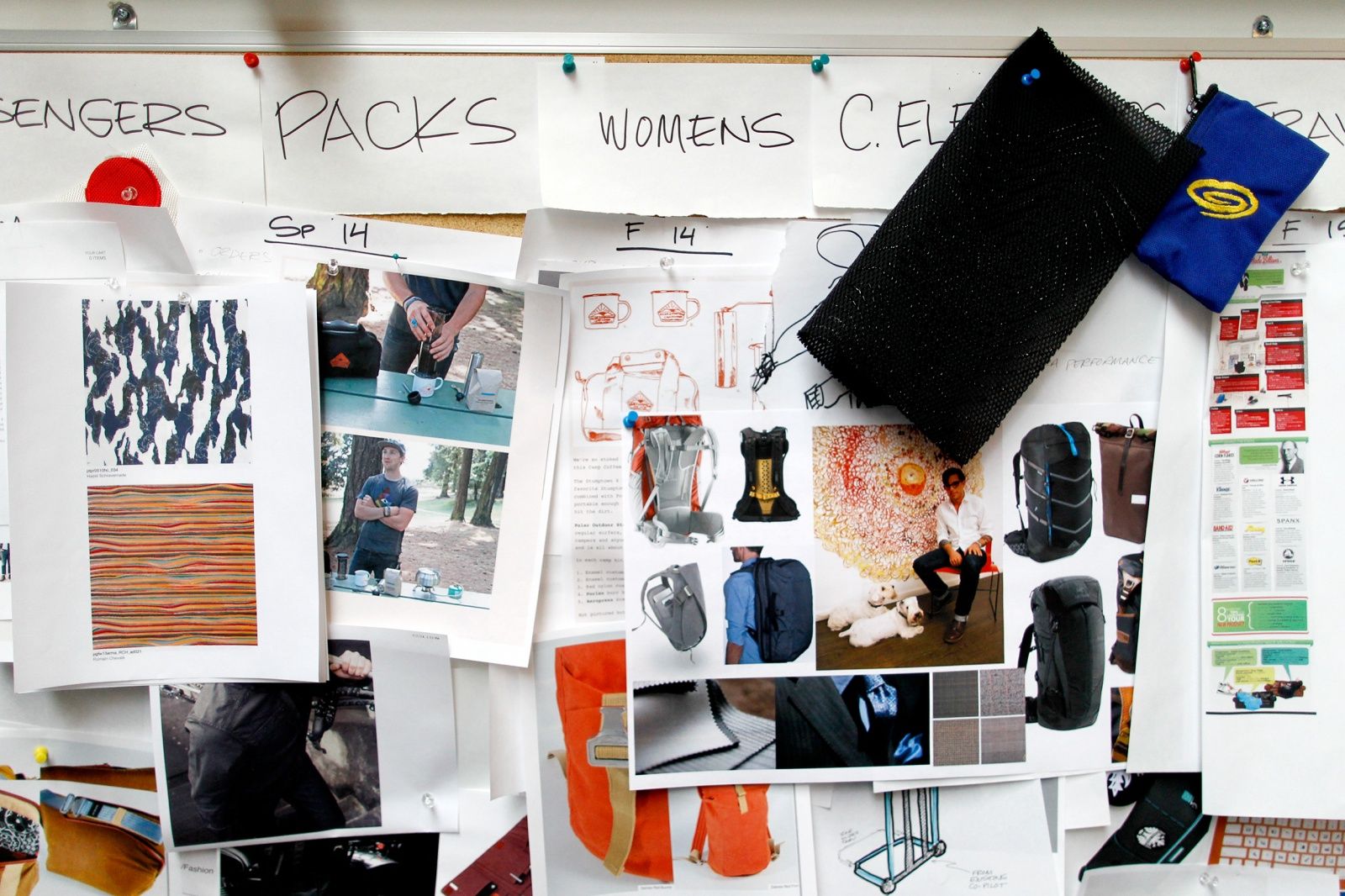 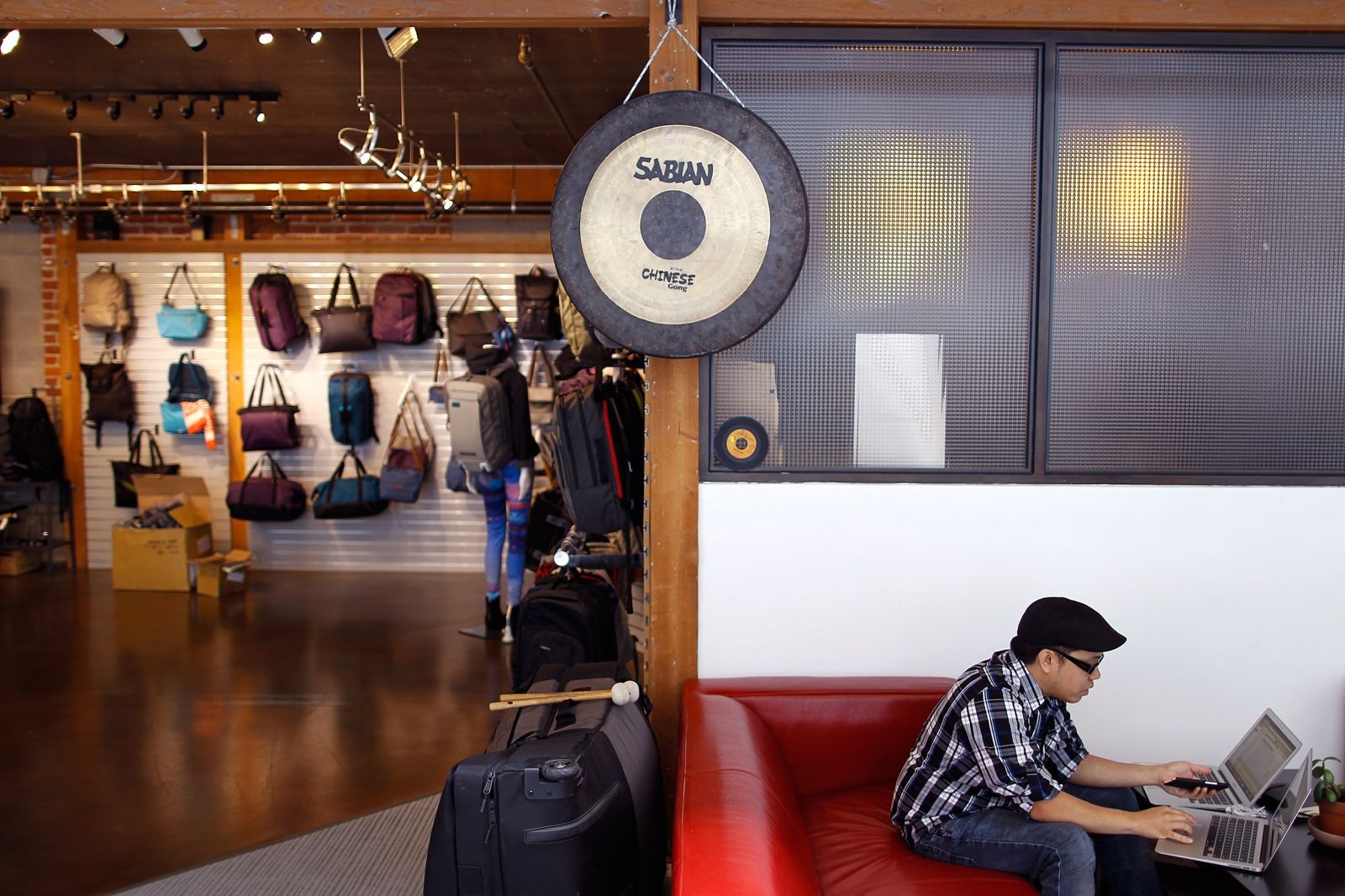 SAN FRANCISCO — Twenty-five years ago, a bike messenger sat in his garage and used an old-school Singer sewing machine to stitch his mark on the world.

That bike messenger was Rob Honeycutt, and the bags he made in 1989 were called Scumbags. They were designed for use by the city’s notorious two-wheeled delivery riders, whose fashion sense tended toward crude cutoffs, T-shirts and hoodies.

A year later, Honeycutt changed his operation’s name to Timbuk2, and the company’s been crafting an increasingly ambitious line of bags ever since, expanding far beyond the world of tattooed dudes on fixies.

“Timbuk2 wasn’t going to the office 25 years ago,” CEO Patti Cazzato told Cult of Mac during a recent tour of the company’s Mission district factory, where all of Timbuk2’s custom bags are made.

The industry has come a long way since Honeycutt operated his mail-order messenger bag business, handing out pamphlets at Bay Area bike stores to peddle his shoulder-strapped bags. From courier bags and backpacks to the resurgent “murse,” carry-alls are everywhere you look, fueled by our modern love of gadgets. (In Timbuk2’s hometown, it’s undoubtedly fed by a law that bans plastic bags and forces stores to charge a dime for paper ones.)

Timbuk2 has embraced this change, expanding beyond traditional messenger bags to offer laptop bags (a gift from the first San Francisco tech boom), backpacks (an even bigger market), luggage and even high-end coffee travel kits (a partnership with local java snobs Blue Bottle Coffee). The company is also embracing female buyers with new lines of yoga bags and totes.

In the San Francisco factory, the Timbuk2 team dreams up these designs and also puts together all the company’s custom-ordered bags. An online customizer tool let buyers pick specific interior and exterior fabrics, bindings and color combinations, or add computer packs, water bottle holders or other extras.

The messenger bag’s three-panel design — which originally allowed Honeycutt to use fabric scraps — makes an easy template for letting customers show their colors. Buyers can pick from several fabrics, including some seasonal prints.

“The polka dots were a big hit with the ladies,” says Noel Kopp, Timbuk2’s social media manager, of one recent option.

Timbuk2’s non-customizable bags — which it calls its “in-line products” — make up 70 percent to 75 percent of the company’s business. These items get produced at factories in Vietnam, Indonesia and China. But the custom bags, which fetch a 30 percent premium, all come out of the San Francisco warehouse, which used to be a carpet factory and then an auto mechanic shop. Now there’s a disco ball hanging from the ceiling in the front part of the building.

The company ships 150 to 500 custom bags per day, typically within three to seven days of an order being placed. Of the 70,000 bags made here last year, only four were exactly the same.

“It really goes to show the beauty of custom,” says Kopp.

In addition to the workers manning the sewing, cutting and shipping lines, the San Francisco offices house Timbuk2’s corporate sales division and dealer services department, which manages relationships with Amazon, REI and mom-and-pop shops that carry the bags. The customer services department is located there, too, so the team members can develop an intimate relationship with the products they are supporting.

“They are familiar with every single pocket,” says Kopp.