About a month ago, I said on Twitter that I was looking for a new podcast app to try. I’ve been a user of Instacast on iOS and OS X for a long time, but recently the app’s cloud sync has become too unreliable and glitchy.

I got a lot of suggestions, but ended up settling with Apple’s own Podcasts app. It didn’t address several things I wanted out of a podcast client, but it was the most reliable and easy to use option from what I came across.

And now, lo and behold, the most highly-anticipated new podcast app in a long time has come out. Today Marco Arment released Overcast, a simple and yet powerful podcast app for the iPhone. I’ve given it a test run, and although there is plenty of room for improvement, I’m pretty impressed.

Originally announced in September of last year, Overcast has technically been in the works since late 2012. That’s a long time for any app, but it probably had something to do with how busy Marco Arment keeps himself. If you don’t know anything about Arment, you’ve probably heard of some of the stuff he has made. He helped make Tumblr, created Instapaper, launched the first successful Newsstand-only periodical called The Magazine, and is a co-host of the Accidental Tech Podcast.

Like many others, I’ve been eager to see his take on what a podcast client should be. It helps that I’m personally invested in the podcasting world as a co-host of this site’s show, The CultCast. 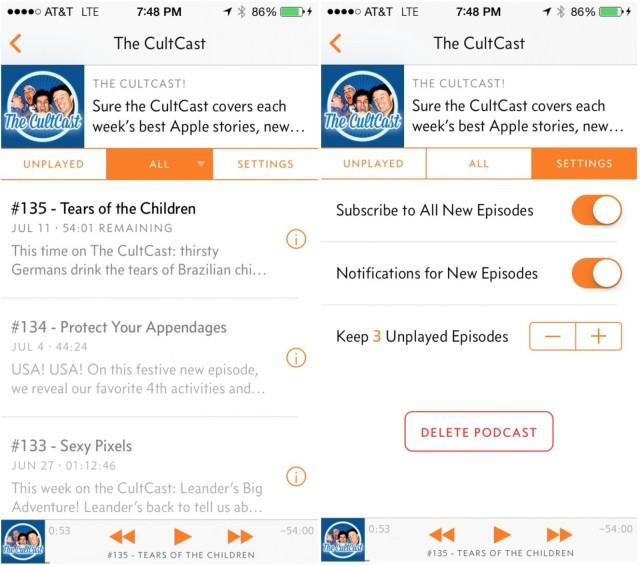 There are several things I love about Overcast as a podcast app, but it’s important to note its major shortcomings first. As of right now, there is no iPad app or Mac app, no support for video podcasts, and no streaming. If any of those are a deal-breaker for you, Overcast is not what you want.

That being said, Overcast does have a lot of redeeming qualities. It’s elegantly designed, and it has a few bells and whistles that set it apart from the competition. It’s also free in the App Store to download.

When you first open the app, you are prompted to create an Overcast.fm account for syncing and cloud storage purposes. Arment has created a server-side backend that does all of the heavy lifting for refreshing feeds and fetching new episodes. This is designed to keep the app from bogging your iPhone down and draining its battery.

The other major reason for needing an account is that you can log into a simple web interface to manage and play your feeds. The web app is pretty barebones at launch, but it will get more full-featured over time. It also helps solve the issue of there being no Mac app out of the gate. Playback is synced pretty quickly in the cloud from device to device.

Overcast can only download podcasts, not stream them. You can set up automatic downloads in the backgrounds for certain shows, which helps alleviate the omission. Streaming is in the works, and Arment has confirmed that it will be introduced with an update for iOS 8 in the fall.

The app is free to download, but a $5 in-app purchase gets you the following locked features: 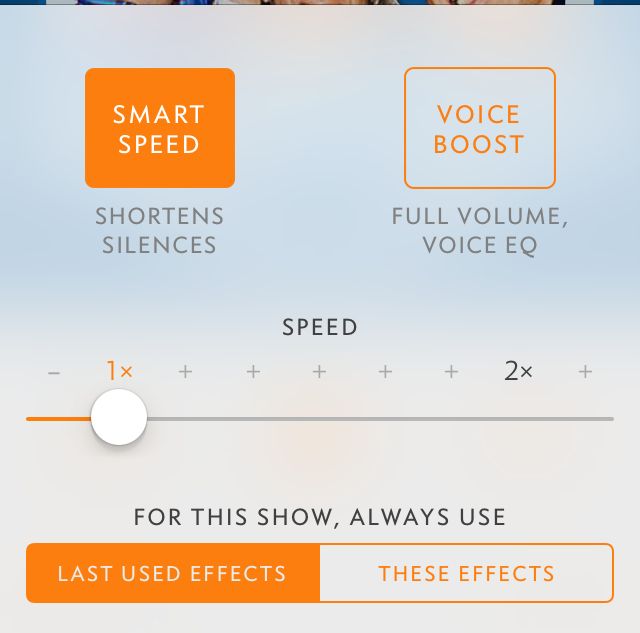 Of that list, Smart Speed and Voice Boost are two Overcast-specific features that are pretty unique. Smart Speed intelligently removes the dead space between phrases to speed up listening, and it actually works really well. For shows like The CultCast where we talk over each other a lot, it’s not that useful. But Smart Speed is great for less causal (or more intelligent) shows where there can tend to be longer pauses in conversations.

Voice Boost amplifies and normalizes a show’s volume so that it’s easier to hear in louder environments. I don’t have much use for this feature, but I can see it being useful for others.

These settings, including the ability to adjust overall playback speed, can be tailored and saved on a per-show basis, which is great because you probably won’t want them set the same way for everything you listen to.

Another cool part of Overcast is how it handles Twitter recommendations. You can hook the app into your Twitter account (read-only, it won’t spam your followers) and have it recommend shows based on what your friends are talking about. The feed directory has a search bar and editor’s sections for different topics that are curated on a consistent basis.

I’ve never really been into organizing my podcasts in playlists, mainly because I don’t listen to that many shows regularly. If you’re into that sort of thing, Overcast has robust playlist management, including a priority feature that lets you choose which feeds rise to the top when new episodes arrive.

In terms of reliability, attention to detail, and features, Overcast is a strong 1.0 release. It still desperately needs streaming, and native apps for iPad and Mac would be nice. But I’m excited to see where its development will go, and it has earned a spot on my iPhone’s homescreen. If you’re looking for a different way to listen to podcasts, give Overcast a try.