iTranslate has been one of the most popular language tools on iOS for a long time, and today it comes to the Mac.

With support for over 80 languages, voice output to help with pronunciation, and a clean menubar app design, this is an app definitely worth checking out.

I’ve been using iTranslate in my menubar for the past several weeks, and I can attest to how smooth and polished the experience feels. You can define a universal shortcut to trigger iTranslate in your Mac’s menubar from wherever you are, and the little anchor icon keeps the window at the foreground of whatever you’re working in. 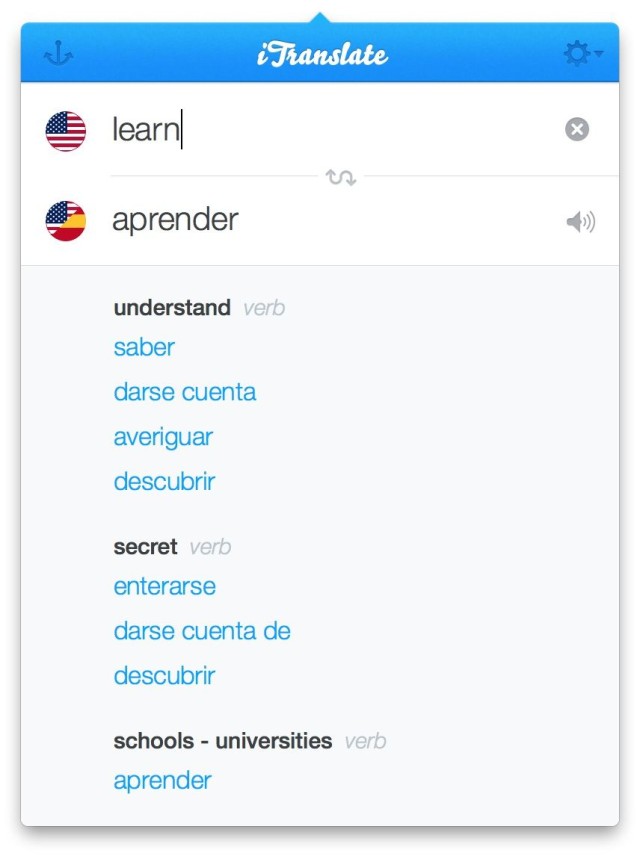 Like it’s iOS counterpart, iTranslate is fast. One of my favorite features that I was glad to see brought to the Mac is the ability to quickly switch the input language with the output—so jump back and forth between translating from English to Spanish and vice versa. A dictionary not only displays a translated word or phrase, but it’s different uses and even synonyms.

Another great part of iTranslate is that it can speak any word it translates back to you. You can adjust whether the voice is male or female as well as how fast words are said for each language.

iTranslate also has built-in Romanization for languages like Chinese, Russian, and Arabic that use non-Lation based characters.

Since the app just launched and is being featured by Apple on the front page of the Mac App Store, SonicoMobile is selling iTranslate for Mac at a 50% discount price of $4.99 for a limited time. Get it while it’s hot.