A Twitter account claiming to be run by superstar Apple exec Craig Federighi has been tweeting and retweeting as if it’s run by Hair Force One himself during WWDC. It has amassed more than 14,000 followers in less than two weeks and looks legit at first glance, but don’t be fooled.

We’re pretty sure it’s a fake — and we’ve seen an email that appears to confirm our suspicions.

Federighi, who is in charge of all Apple software, is the funniest and most charismatic public speaker on Cupertino’s executive team. His wisecracks during the WWDC keynote Monday included a riff on “OS X Weed” and a jab about Jony Ive’s “diamond-cut, chamfered-edged aluminium spoon.” So the casual, enthusiastic tone of the tweets coming from @craig_apple sound believable enough.

Good morning! Only a week left until WWDC 2014! #wwdc2014 pic.twitter.com/AdoKyug2mk

Not too shady, but then there were these tweets leading up to WWDC:

Some of the rumors I’m hearing about upcoming releases are actually quite correct. #apple — Craig Federighi (@craig_apple) May 27, 2014

If anything serious leaks, don’t blame it on me. #appleleaks

To those who are wondering, this is not quite Myriad. #ios8 #wwdc2014 pic.twitter.com/MyB0dw38B0

Most of the account’s recent activity has been retweets. App Store developers have been taking selfies with Federighi all week at WWDC in San Francisco and, thinking it’s him, have been mentioning the account.

Our ambassador @emreberge just meet up with @craig_apple at #wwdc14, can you see the resemblance? pic.twitter.com/hj2ajwqws5 — Bontouch AB (@bontouch) June 3, 2014

With the amazing and unique @craig_apple at #WWDC2014. Thanks for the photo Craig! pic.twitter.com/receljeWOM

A line formed at #wwdc to take a photo with @craig_apple pic.twitter.com/BnsMpZH505

Whoever set up the account tried to make it look as real as possible, following the official Apple accounts you would expect. 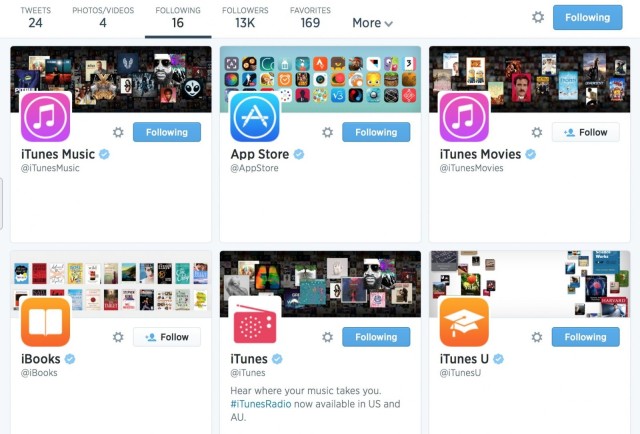 What’s most telling about it being inauthentic is something that can’t be faked: It doesn’t sport the blue check mark that indicates a verified Twitter account. Not one of the other Apple execs who have been verified by Twitter follow the account either, including Tim Cook, Angela Ahrendts, Phil Schiller and Eddy Cue.

(Update: CNBC has since tweeted a correction: “Apple now confirms that @Craig_Apple does not in fact belong to Craig Federighi.”)

An email from the Federighi

A Cult of Mac reader emailed Federighi himself to set the record straight, and he actually got a response. 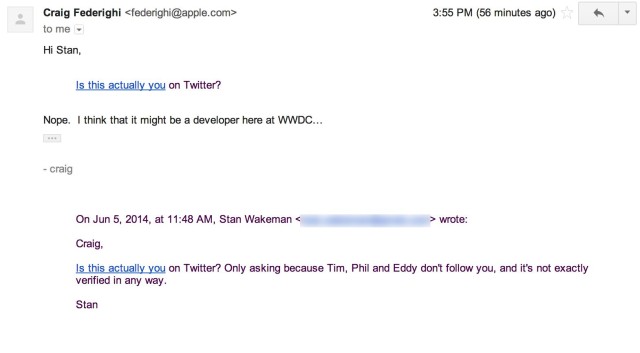 Verified email headers confirm that the reply is from Federighi. We’ve reached out to Federighi and to Apple PR for comment but have not yet received a reply.

Federighi is the most electrifying personality at Apple right now, and he should be on Twitter officially. Some headlines called him the new Steve Jobs after Monday’s keynote, which is a bit of a stretch. But the praise speaks to his talents as a presenter.

Come on, Craig. You’re a rock star. We need you in the Twitter world.

And, just so you know, @hairforceone is already taken.

Number of comments on this postLeave a comment
Posted in: News, Top stories Tagged: Craig Federighi