What if you had access to any song you wanted while you were DJing? “It’s like giving a chef infinite resources for ingredients,” explains Algoriddim co-founder and CEO Karim Morsy. Algoriddim’s popular djay app is getting a major update today that gives users the ability to mix and match millions of tracks on the iPhone and iPad.

Thanks to a partnership with Spotify, djay users can now play any of the streaming’s service’s 20 million songs. Some fancy audio matching technology also makes it incredibly easy to match and discover new tracks.

Once you log in after tapping the library button, djay has access to all of your playlists and Spotify search. That’s great if you already have a mix preloaded to play at the next party, but for those who prefer more of a live experience, the app’s new Match feature is pretty incredible. 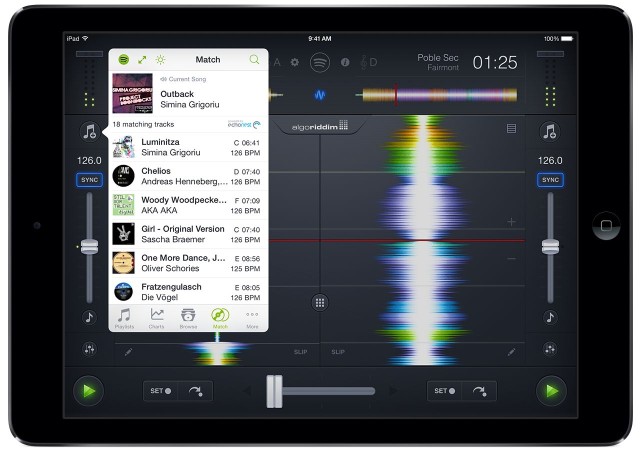 Whatever track you have playing can be instantly matched with similar songs from Spotify’s catalog. The analyzing is powered by The Echo Nest, a “music intelligence company” Spotify recently acquired. Not only are selections chosen based on algorithms, but human curation as well.

While playing with the app, I was impressed by how quickly tracks loaded and matched over a WiFi connection on the iPad. Not having to worry about finding the next song in a sea of music takes a lot of the stress out of DJing, especially if you’re an amateur to begin with like me. When you want the app to do all the work, it’s great to turn on Automix Radio and let it handle transitions between tracks.

You also need a good internet connection for the Spotify integration to work, which isn’t always easy to find. A Spotify Premium subscription is required as well, which costs $10 per month or $5 per month for students.

Mixes played in djay with Spotify are recorded and can be exported or shared with friends on Facebook and Twitter. Algoriddim has developed partnerships with a lot of the pro DJ gear makers out there, so djay is designed to work with turntables from companies like Numark and Pioneer.

Existing djay 2 users get today’s update for free in the App Store, and a seven-day free trial of Spotify Premium is available for all current and existing djay 2 customers. The iPhone version of djay 2 has been made free from $1.99 to celebrate the release, and the iPad version has been discounted from $9.99 to $4.99.