HYPER by Sanho – the company behind the Hyperjuice batteries for Macbooks and iPads have just launched their latest creation to the world through Kickstarter.

The iStick is essentially a USB stick with the dual use of connecting it to your iPhone 5, 5s, iPod Touch and iPads with it’s Apple certified lightning connector, which is great if you have a internet connection that is too slow in the office for cloud based storage, or if you’re on the road and want to watch a couple of movies without eating into your data plan.

HYPER needs to raise $100,000 (£59k) within it’s 35 day campaign Early backers of the iStick will receive the product at a discounted rate, or if you’re feeling flush you can pledge up to $5,000 and receive one limited edition gold aluminium iStick.

The USB/Lightning stick comes in 8gb, 16gb, 32gb and 64gb capacities and can handle most formats for movies, pictures, audio and documents which will then work on your iOS device.

HYPER is seeking $100,000 via Kickstarter to fund the iStick product. Funding begins May 12, 2014 (8am PST/11am EST) and ends on June 17, 2014. Upon successful funding, HYPER aims to ship the iStick in August, 2014. This is HYPER’s 2nd Kickstarter project after the successful CloudFTP which was the 3rd highest funded Kickstarter Technology project when it ended.

·      Connects directly to iPhone, iPad and iPod touch models that use the Lightning connector

·      Using the app, users can transfer photos, videos and other files between iStick and iDevice

·      Users can also stream movies (even non-iOS native video formats), music and open files directly from the iStick without first copying to the iOS device. 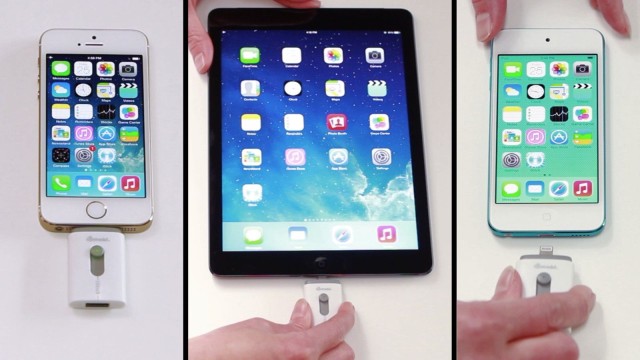 Founder and owner, Daniel Chin, had this to say about the iStick and it’s Kickstarter campaign to Cult of Mac

We only reserve Kickstarter launches for our very best products just like what we did with CloudFTP 2 years ago. In addition to crowdsourcing funds, we also want to crowdsource ideas and suggestions to make the product even better and to give it the biggest launch possible.

HYPER says the iStick allows you to easily, quickly and safely move data between computers, iPhones, iPads and iPod touches without the need for iTunes, Internet or the Cloud where hackers and others (like NSA) may gain access – something I’ve never personally worried about, but I can see a use for the iStick and will be definitely be picking one up when they are expected to ship in August 2014 upon successful Kickstarter funding.

Keep an eye out for our video review of an early model iStick within the next week or so, in the mean time, check out HYPER’s video for the iStick.