The Hitman series has always alternated between vicious and silly, with a stern protagonist who will wear any kind of ridiculous costume, from ice-cream man to Mardi Gras costume, in order to murder his target. Hitman GO, a new turn-based puzzle game from Square Enix, doesn’t give you extensive dress-up options, but it is a refreshingly smart take on the series.

Hitman GO sanitizes the series’ violence by turning it into a simulated board game, with a satisfying number of missions and challenge. Presented as a collection of boxed sets with very little background audio, it’s a dramatic departure from the console games’ over-the-shoulder view and stealthy gameplay. You don’t creep in Go, but instead slide your Hitman game piece along grooves in the board, toppling other pieces when their backs are turned.

Without any of the strangling or shooting, Hitman GO feels surprisingly serene for a game based around assassinations. The figurines look like real game piece miniatures, and they don’t animate except for an automatic repositioning each turn. The backgrounds look highly realistic, creating the perfect illusion of a miniature playing field.

Hitman GO feels surprisingly serene for a game based around assassinations.

In addition to its good looks, Hitman GO is a highly challenging puzzle game. Through lots of trial-and-error, you’ll quickly learn how enemies move around the board and which hidden traps can be used to conceal your actions. Even better, it’s all done without any overt instructions: You just start playing, and the patterns become apparent; you’ll learn to throw rocks to distract enemies early on, while later levels allow you to travel through secret passageways. 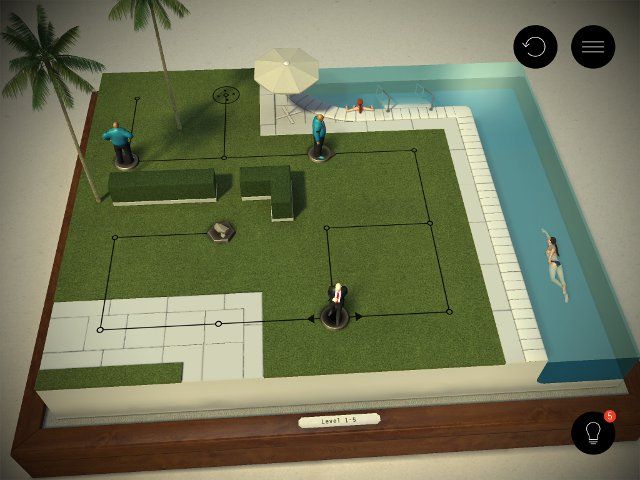 While it’s quick to reset a level and try a different approach, you can also take advantage of the game’s hint system in order to beat a level or complete optional challenges. You can also pay to skip ahead without completing these extra objectives. At $4.99, you’ll likely be satisfied with the amount of content without any additional in-app purchases.

Hitman GO is a rare game that successfully reinvents a franchise with style and intelligence, built solidly with the mobile platform in mind. If it was a real board game, I’d expect it to be flying off the shelves.