Apple is expected to give potential iPhone 5c customers a cheaper option tomorrow with the launch of a new 8GB model. Leaked documents from O2 Germany have confirmed the existence of the device and its launch date, while two carriers in the U.K. have reportedly already received their first deliveries.

German website Caschy’s Blog today published an internal email from O2, obtained by a “trusted source,” that announces the launch of the 8GB iPhone 5c tomorrow, March 18. The email states that the device will be priced at €509 ($709), which is €60 ($84) cheaper than the 16GB model.

Strengthening this report is an image of the 8GB iPhone 5c’s packaging, which was published today by Engadget. It confirms the handset’s part number — “MG902B/A” — which accompanies the same “A1507” model number given to the 16GB and 32GB variants. 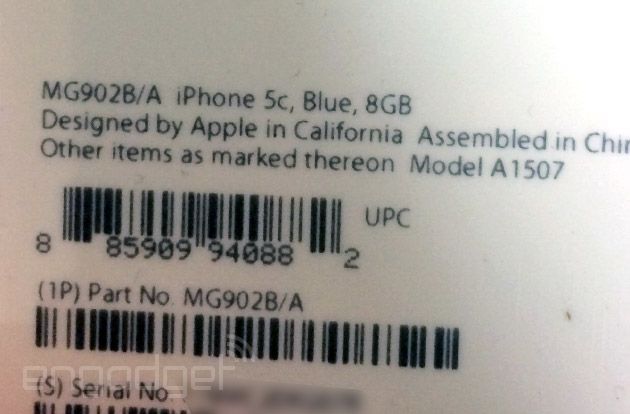 Aside from its storage capacity, the new iPhone 5c is expected to have the same internals as its siblings. They include a 4-inch Retina display, an A6 processor, and an 8-megapixel iSight camera. It’s also likely to be available in the same five color options.

With major iOS updates weighing in at close to 3GB and the latest flagship games matching them, many have questioned Apple’s decision to keep the 16GB iPhone — let alone an 8GB one. It’s certainly not an option we would recommend for the average user, then.

Bear that in mind when the 8GB iPhone 5c hits the Apple store tomorrow.