Use the hidden autocomplete in Apple Watch’s Scribble to send text messages
Apple seeks dismissal of Servant plagiarism lawsuit
Get all the video tools you need in one app [Deals]
Today in Apple history: Photoshop debuts as a Mac exclusive
Larry Tesler, the Apple employee who invented cut, copy and paste, dies at 74
Lockdown Firewall now safeguards your Mac
Quick! Bag Powerbeats Pro for under $150 today [Deals & Steals]
watchOS 6.1.3 brings a heart-related bug fix
Yes, you can still take photo bursts with iPhone 11. Here’s how.
AirTags on the radar for roll out in the second half of 2020

The fine folks at Twelve South have brought the popular SurfacePad case to the iPad mini. The cover is made from Napa leather, and it bends to form a viewing stand or typing wedge.

One of the coolest design aspects of the new SurfacePad is how the iPad mini is held in place when upright. Instead of resting the iPad in little leather notches like most bendable cases, the edges of the iPad are secured by invisible magnets. 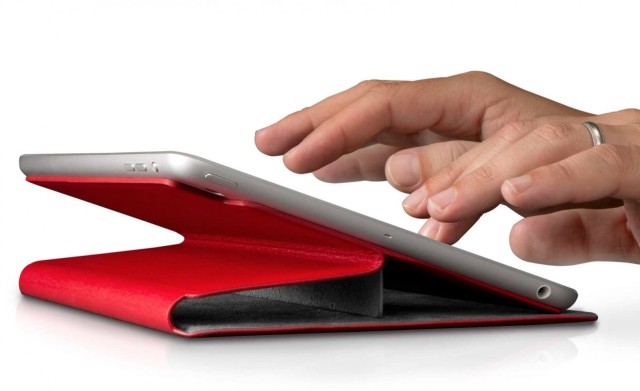 “The moment we released SurfacePad for iPhone last year, users told us they wanted the same modern cover for iPad mini, but we wanted to take it a step further,” said Andrew Green, Creative Director of Twelve South. “First, we removed the need for the typical bulky plastic shell by adhering SurfacePad to iPad. Then, using hidden magnets to display iPad? So cool… it’s the kind of feature you’ll show your friends. Finally, the addition of the smooth, non-creased cover combined to make one of the best designed iPad covers we’ve ever seen.”

Cult of Mac Reviews Editor Charlie Sorrel was initially impressed with the SurfacePad for iPhone last year, but he found that it was too susceptible to wear and tear a couple of months later. Hopefully Twelve South has solved durability issues this time around.

The SurfacePad for iPad mini costs $69.99 on the Twelve South website. Available colors are Pop Red, Mod White and Jet Black. An iPad Air version of the SurfacePad is coming in the late spring.