I’ve been looking forward to SteelSeries’ Stratus since it was announced back in January of this year.

The joy of most iOS titles is the ability to play using the touchscreen. The gaming world has benefitted greatly from iOS game developers learning how to best control their games without a physical controller.

However, there are a few games — especially versions of old-school console games — that just cry out for an actual button-filled controlling device that you can use while staring intently at the screen.

The Stratus, and other controllers like it, aims to fill that need with a smaller, super-portable and highly accurate controller that takes advantage Apple’s own iOS game controller code that’s built right into iOS 7.

Whether you’ll find this a successful or not depends a lot on your device, the games you want to play, and how your hands fit on the Stratus itself. 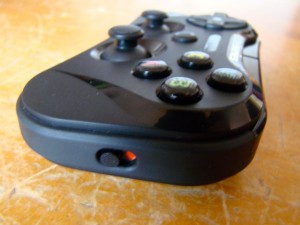 The SteelSeries Stratus is a delightful little controller device that’s built on the company’s previous iCade-compatible SteelSeries Free controller, which emulated a bluetooth keyboard to control certain games on iOS.

The Stratus kicks things up a notch, as it’s a fully-compatible iOS 7 bluetooth gaming controller. As such, it’s easy to pair and connect with most any iOS device running iOS 7 without any extra trouble.

However, that’s where the trouble comes in. I tested the Stratus with my iPhone 5, my iPad mini (non-retina), and two iPad 3s. The iPhone and iPad mini connected to the Stratus without a fuss, but I could not, for the life of me, get it to connect with either iPad 3 running the latest version of iOS 7. I could see the Stratus in the list of devices to pair with, but was not able to connect to it via the Bluetooth screen. Sometimes, it would connect, only to disconnect, while other times I would get a “make sure your device is nearby and active” error message. Once, I even got a message that said that “this device is not supported on this iPad.”

For $79, you’re getting a solidly-built precision gaming controller that’s simple to use and easy to carry.

On the iPhone and iPad mini, however, the pairing process was easy. Once you toggle the Stratus controller on with the hardware side switch, you simply set it to pairing mode with a button on the back of the controller and then pair as you would any Bluetooth device on your iPad or iPhone. 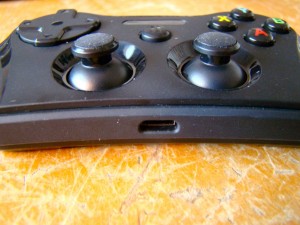 The hardware design is pretty slick here, though the smaller size may deter some large-handed folks from spending too much time with the Stratus. The face buttons and analog sticks feel solid and high-quality, as do the dual shoulder buttons on the left and the right. It takes a bit of getting used to the more central location of these shoulder buttons, but after a few minutes, it became second nature to me fairly easily.

The Stratus lasts quite a long time on one charge, accomplished via an included mini USB cable that connects to the port on the bottom of the controller. I charged it overnight before using it over a several hour period in which I left the controller on. There’s a handy series of lights on the front face, too, which flash one, two, three, or four lights depending on the battery charge, so you’ll always know how much battery you have left. 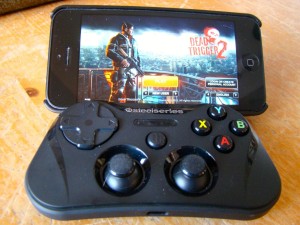 There’s an entire list of games that are compatible with the Stratus, which can be found on the company’s website. I tried the stratus out with a variety of different types of games, including Trouserheart, Oceanhorn, Galaxy On Fire 2 HD, Dead Trigger 2, Lego Lord of the Rings, and Dungeon Hunter 4.

I was surprised that my experience with the controller was different in each game I tried. Trouserheart worked wonderfully, while Galaxy On Fire 2 HD was an initial disappointment. I wasn’t even able to fire weapons with the buttons, and it seemed as if I was in a continuous left turn. A quick reboot of the controller, by turning it off and on again, solved that problem.

Lego Lord of the Rings worked fine, but the motion control was assigned to the directional pad instead of the left analog stick, as it would be on a console. This seemed like a weird omission.

By far the best gaming experience I had with the Stratus was in Dead Trigger 2 and Oceanhorn. Using the controller felt just like playing a game on a console: motion was fluid, both analog sticks did what they were supposed to, and the buttons worked flawlessly. The directional pad navigated menus and screens with ease. It was a delight to play these games using the Stratus controller, and it worked equally well on the iPhone 5 and the iPad mini. 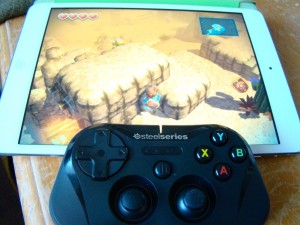 Obviously, the whole iOS controller thing is a work in progress. While I’m not sure what’s going on with the inability to get the Stratus to pair with either of the iPad 3s in the household, I can’t truly blame the controller for any issues in various games. The controller support is a software issue, and each developer must include the iOS 7 code to make these things work. If movement is mapped to the directional pad and you don’t like it, you may be out of luck.

That said, the Stratus worked wonderfully well on my iPhone 5 and iPad mini. Playing games like Galaxy on Fire 2 HD and Dead Trigger 2 proved to me the potential of such a device, and the Stratus is a fantastically portable version.

The issue really is whether you’re ok with any kind of inconsistency. If you have an iPad 3, I can’t recommend the Stratus, but neither can I dismiss it as a Stratus-only issue, not having other similar devices to test with. Maybe the iPad 3 has a Bluetooth issue all its own.

Bottom line, for $79, you’ll get a solidly built precision gaming controller that is easy to use and carry. In the games I tried, anyway, the addition of the Stratus made the games feel much closer to a console experience than they ever have with touchscreen controls alone. SteelSeries has created a great controller with a ton of potential, even with the possible issues I’ve recounted above. As developers figure out the iOS 7 game controller specifications more, this little powerhouse of a gaming controller will just get better and better.