For the last few weeks, I have had a little pebble-shaped gadget sat out on the wall of my balcony. It’s the Tempo, a Bluetooth thermometer which keeps the last 24 hour’s temperatures in memory, and passes them to your iDevice on demand. It’s also pretty tough, as we’ll see…

The Tempo is a hard plastic, AA-battery powered gadget that can measure from –25˚C up to 75˚C, on 0.2-degree increments. The battery life is said to be a year (my test unit is still on full-power after a few weeks), and the durable body contains a brass battery door and sits on grippy rubber feet.

It comes in a range of colors, and works with a free companion app to give you an instant reading of the current temperature plus a 25-hour history in graph form. The app is universal.

It just works. Mine has been sat outside on my balcony’s wall, its floor, and the kitchen window ledge. One paired (through the app, not through the standard Bluetooth settings), the Pebble just sits there and records the temperature. 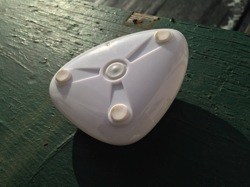 The best part is the speed. Even with the Bluetooth radio on your phone seemingly still in standby (a faded Bluetooth symbol in the status bar), when you start the app the temperature is right there on the screen as you launch, along with a time stamp (usually one or two minutes ago) telling you when the last reading was taken.

Tap the little chevron at top right and you’ll have to wait a few seconds while the app makes a full connection and grabs the data for the last 24 hours. This is shown on a graph.

You can also set alarms to sound when certain temperatures are reached, but I never managed to work out whether these are triggered only when you launch the app, or my some other magic mechanism. They seemed almost random to me. Besides, the alarm is a loud klaxon, so you might not want it sounding at all.

Having the actual temperature outside (or inside, for that matter) is handy, especially if it’s veering between –14˚C and +7˚C as it has been in my town this past week. Because the weather stations used by your weather apps are often located at airports and other places that aren’t your home, they can be off by a surprising degree (pun intended). My weather app of choice ([Weather Pro][!cultofmac.com)) reads consistently 3–4 degrees below the temperature on my balcony (and 6–7 degrees below the temperature on the kitchen window ledge). 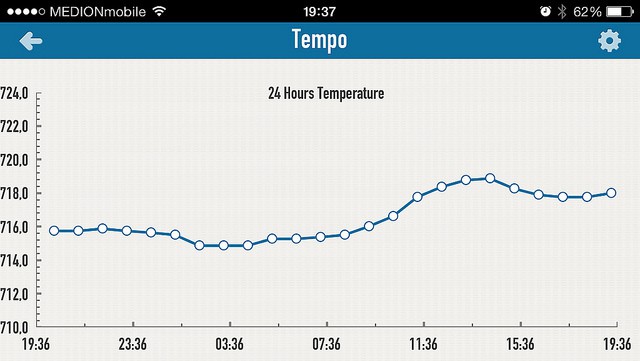 The Tempo is mostly reliable, although you probably don’t want to leave it in the sun. I got a warning telling me that the temperature was outside its operating range, and I had another odd 24 hours where the app insisted that the temperature outside was more than 700˚C (the current temp readout was still just fine). But other than this and the odd connection problem (quickly solved by moving closer to the room with the balcony) it has been rock solid. And it even looks like a real rock, helping to deter thieves.

If you’re in the market for some temperature monitoring, the Tempo is a great choice. It’s truly set-and-forget, and you can just tap the app icon on your iPhone when you’re heading outside. I’m planning on bringing it in for a few weeks to see how cold my bedroom actually gets at night, but after that it’ll be left on the ledge until the battery dies or the thing gets stolen by a magpie in the Spring, whichever comes first.