So, I finally broke down and bought a Pebble Smart Watch the other day. Just rolled into Best Buy and looked at both the FitBit Force fitness tracker and the Pebble. At just $20 more than the Force, I figured I’d get a fun geeky gadget that would do more than tell the time and count my steps.

What I got for my $150 was a geeky gadget that tells me the time and passes notifications–usually–from my iPhone. And that’s about it, really.

The version I purchased is one of the red ones, so it looks like a sports watch to begin with. The wristband is made of flexible rubberized plastic, and the watch itself is a fairly good-sized rectangle that bends down at the top and bottom to better conform to my wrist. The left side of the watch has a magnetic charging area and one large push button, while the right side has two large push buttons and a third, smaller button in the middle. You can download new watch faces from the Pebble iOS app, some of which are cleverly designed, and others that are not.

You turn on the blue back light with a shake of the wrist or a push of any button. The e-Ink display is readable in any light I’ve used it in, and is a great low-powered solution to a display screen.

The charging cable is an odd proprietary thing, which magnetically connects to the side of the Pebble device. It doesn’t attach super securely, however, which has resulted in some disconnects and non-charging issues. As long as I position it correctly for an overnight of charging it does fairly well. The battery life is excellent, lasting me several days between charges.

The watchband is functional, if not super stylish. Luckily, you can change it out for almost any standard watchband, so you can make it more sporty or more classy, as you wish. The plastic face seems like it could be a bit of a scratch-magnet, but I’m happy to report that I haven’t gotten any damage on the face. This is a good thing, because I’d hate to have to slap a clear plastic screen protector on it; that would just be too fugly. While the next version of Pebble, the Steel, will be more metal-tastic and fancy, I’m perfectly happy with the red plastic sports watch look and feel.

The notifications are enabled within the iOS app as well, and there are a few tweaks that have to happen before you can get notifications from all the apps you want to. You’ll need to enable “Show in Notification Center” for each app you’d like to pass Notifications from, but that’s just a start. Some specific apps, like Twitter, need the Banners notification style to work, too.

Even when Notifications are working, though, the iOS Pebble app seems to think they aren’t, which isn’t super helpful when trying to figure out if things are set up correctly. In addition, sometimes I’ll stop getting Notifications on the smart watch, even though they show up on my iPhone. It’s fairly inconsistent at times.

When you first set up the Notifications, you’ll need to enable them from the Pebble iOS app, as well. The subtle complexity of toggling all the right switches can be a bit confusing, even to a tech-head like myself. There’s no way my mom could manage this watch for anything other than telling time. 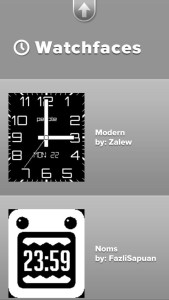 The apps, though, are where I figured the Pebble would shine. Unfortunately, there just aren’t that many out there, yet. You can download watch faces from within the iOS app, but there’s just so many ways I need to see the time. Other watch faces promise live weather updating, but those require support apps to be installed on the iPhone, and I’ve just not been able to make any of them work. Passing data beyond notifications is just not ready on the Pebble smart watch. Yet.

There’s the promise of the next version of the Pebble software, 2.0. Pebble developers can sign up to get this version and begin making apps for the wearable. The potential is there for access to the accelerometer already in the Pebble devices, which would make it handy as a stand alone fitness tracker or pedometer. I have found two great apps that run on the Pebble itself, one is a stop watch and the other is an interval timer so I can run for 5 min and walk for one when on the track.

There are a handful of iOS fitness apps that work with the watch, too, like RunKeeper, but they require having my iPhone along with me as well. In addition, I run on a track in the winter, so RunKeeper and I don’t hang out too much when it’s snowy outside. I do look forward to trying it out during the summer months when the roads are clear. Honestly, though, if I have to bring my iPhone along with me anyway, I really don’t need a remote screen. 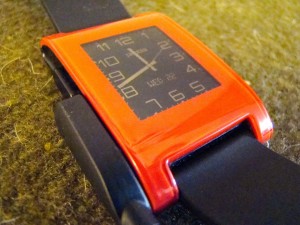 And that’s the ultimate rub. The Pebble–in its current state–still feels like an open source project. The watch is fine for telling the time, and for getting my iMessages and other notifications when my iPhone isn’t right at hand (even though it usually is).

The potential here is limitless, but I’d sure like to see–in addition to the already planned fitness tracking abilities of SDK 2.0–some attention paid to making the integration between iOS and the Pebble a bit stronger, and allowing the Pebble to perhaps do a few more things on its own without the need for a smartphone.

Ultimately, I feel like the $150 I paid is more than most would for a plastic watch, but it’s my early-adopter tax. The Pebble is a watch I’ll be wearing quite a bit for the near future, or at least until the fabled iWatch is revealed.