If you own a laptop, it’s pretty easy to up and move to a more comfortable workplace when your joints start to stiffen. But if you have a giant 27-inch iMac or Cinema Display, you’re kinda stuck at your desk. You could opt for a standing desk, but what if you want to sit? Or you could go for one of those adjustable numbers, but what about the perfectly good desk you have already? That’s where the WorkFit-A comes in. It’s a big robot arm that lets you swing around even a 27-inch (2013 model) iMac as if it were an iPad. A really, really big iPad. 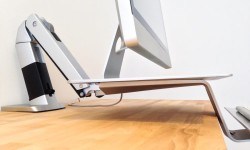 The WorkFit-A is a giant robot arm that clamps to your desk and does the seemingly impossible task of suspending your heavy 27-inch iMac at the other end. Further, with minimal effort you can swing and swivel the whole setup to the exact height you need.

The stand isn’t just for standing either: the unit is designed so that you can also use it whilst sitting. At $650 it isn’t cheap, but it’s probably cheaper than a new standing desk, and it’s certainly the only way to make your workstation look like a Terminator’s limb.

The arm clamps to your desk using a very sturdy 4-bolt system, or you can opt to make a hole in the desk and use the supplied alternative base to make a more permanent fix.

The arm articulates in several spots, scissoring up and down to let you set the height (there’s a spring inside to counter the weight of your iMac), and swivelling at both the center joint (the elbow) and the joint that hold the iMac platform (the wrist). This lets you pan the iMac from side to side, but also to move the unit back and forth. This last is good as the whole thing can stick out pretty far when you lift it up.

There’s a big platform under the iMac for iPhones, iPads, paper or anything else you’d normally put on a desk, plus a separate tilting aluminum tray for the keyboard and trackpad. There’s also plenty of cable-routing help in the form of channels and holes. 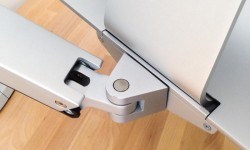 The Workfit-A is almost absurdly sturdy, weighing in at 15.7kg (34.7 pounds) and as solid as can be. Fitting it is easy, although you might need a friend to help manoeuvre it into position. Putting the iMac on top is a little nerve-wracking, but once in place it too is solid and safe. I actually used an old 27-inch iMac which exceeds the weight limit by a few kilos and it was fine (although the desk flexed enough to let the entire arm wobble whilst typing).

If you use the newest slimline iMac you should be good.

Adjusting the strength of the spring is done with an included ratchet wrench, and you just crank down until the iMac doesn’t slowly sink down as you type. The counterbalanced design lets you move the whole computer up and down just by grabbing the tray and pushing. There’s some momentum involved, but it works well.

The idea behind the WorkFit-A is to let you easily switch positions to stay comfortable, and there’s a nice touch that comes when you sit down. When you lower the computer, the keyboard tray overshoots the edge of the desk and sits below it, making for much better typing position.

You’re going to need a sturdy desk to begin with. I used this with an Ikea desk setup, a pair of trestle legs with a very thick hardwood top. There was no problem with stability, but after a couple of weeks of use I finally discovered that the flex in my setup was coming mostly from the desk as it bent near the clamp.

This would of course be alleviated if I used an iMac that came in under the weight limit. And other than this there’s little bad to say about it. 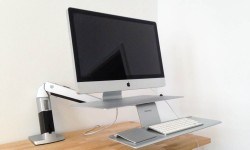 Pricy, and not as sturdy as an actual standing desk, but you gain a lot in flexibility (the good kind, not the wobbly kind) over a fixed or even an elevating desk. It’s also very cool looking, and the fact that you can just sit down whenever you like is a boon.

I like the design so much that I wish it cam in a notebook version. Ergotron does sell a WorkFit-P, but it’s just a shelf on an arm, which offers little more than a regular notebook stand, only for like $329. There should totally be a mini WorkFit-A that didn’t require a minimum of 5kg on top just to make it move.

Whether or not you choose the WorkFit-A is up to you, but if you have a (very) sturdy desk and $650 going spare, then you can at least be sure that it is a very well made piece of kit. Hell, even Apple sells it in the Apple Store.