I used to be a printer opportunist. Find me the cheapest printer in the store, who cares, they’re all the same.

Which, honestly, is true for a technophile like myself (within a certain price range, anyway). I have a Wi-Fi network, spare cables, and a ton of different apps that will let me print from my various Macs and iOS devices.

Not so, however, for someone like my parents. When I went to buy them a printer a few months back to go with their new iPads, we found out that even the AirPrint printers need a WiFi network. They don’t have one (I know, don’t ask).

That’s where the Epson XP-950 comes in. Yes, it’s a high-quality up-to 11X17 photo, paper, and disc printer and scanning device, but the killer feature here? Directly printing from an iPad to the printer without an actual Wi-Fi network to send the print job across.

Oh, and it’s super easy to set up and use.

Granted the Epson XP-950 is called a “Small-In-One” printer by the marketing folks, but it’s not that small. It prints on paper up to 11 X 17 as well as onto CDs and DVDs, and it has two separate paper cassettes as well as a manual feed section there in the back. It’s not tiny. 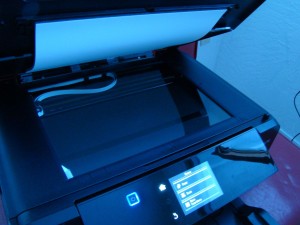 That said, it’s surprising the thing doesn’t take up more space. The footprint is bigger than my current multi-function (an HP 470, for those asking), but not horribly so. The XP-950 takes up just a bit more of my printer table space, which makes it fairly manageable. I’m also a fan of the fact that the power cable is just a standard electronics cable, instead of some weird proprietary thing with a power brick in the middle of it.

The scanning platform is oddly only set up for regular letter-sized paper, and not 11 X 17, a weird omission since the unit itself seems long enough to accommodate a larger size original. The way the top cover bends is a bit off, too, but it’s not a deal-breaker.

The scanner works well from either a Mac or an iOS device, and the software on either platform is simple to use and install. My favorite use for the printer, really, is from an iPad, where I can route printing or scanning tasks with a simple tap or two.

Printer setup can always be a bit confusing, what with all the ink cartridges and instructions to deal with. The XP-950 made this process incredibly simple. The free Epson iPrint software from the App Store turned my iPad into a printing monster in just a few minutes, and the printer even figured out what size paper to print a photo on when I tapped into my iPhone’s Photo album and hit print on an individual image I had snapped the day before.

The killer feature here? Directly printing from an iPad to the printer without an actual Wi-Fi network. 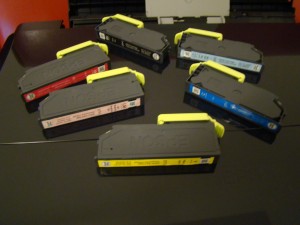 The printing quality is high, which makes sense for a printer that costs about $260. The sheer number of print cartridges is a bit overwhelming, with Black, Cyan, Light Cyan, Magenta, Light Magenta, and Yellow ink bricks to install on set up. Images I printed on the photo paper that Epson included with the review unit turned out glossy and pretty, while some iron-on transfers I printed for holiday gifts were super saturated but not runny, a perfect combination for the project itself.

The printer allows for printing via USB and Ethernet, but wireless is surely the way most of us will use it. The two main setups are easily configured from the tilt-up front panel touch screen, and connecting to my current home Wi-Fi was a snap. Once connected, I could print from any iPhone, iPad, or Mac I owned, and letting friends access the printer via WiFi was just as easy. Even without downloading the specific drivers to my Mac, I was able to print basic pages right away. Printing photos and documents from the iPhone and iPad made my life immediately easier, for those times I needed to put something on paper from my essential mobile devices. 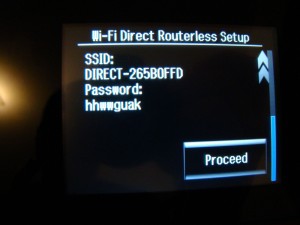 Setting up the Wi-Fi Direct system was a bit tricker, and required a quick check in the online manual, provided at Epson’s website. The on-screen directions were a bit obtuse, so running through the steps in the manual was needed. The actual process, though, was incredibly simple. In essence, you’re turning the XP-950 printer into a Wi-Fi access point for printing. Once set up, all I needed to do was choose the Ad-Hoc wireless network created on the printer as my Wi-Fi network on my iPhone or Mac, and I could print with ease.

My parents will be so excited to hear.

Bottom line, the Epson XP-950 Small In One multifunction printer is a delight to set up and use, and really makes multi-device printing a simple reality for pretty much anyone. It’s not super expensive, and it prints gorgeous photos and documents from iOS devices and Macs with very little computer know-how needed.