The best iPad case I ever had was the red leather Smart Cover for the iPad 2 (and iPads 3 and 4). It looked and felt great, and only ever got better with age. It’s sturdy (the Lady is still using it on her iPad 3), and while the metal hinge has worn a shiny pattern into the iPad’s edge, it grips way better than the plastic-hinged covers for the Air and Mini.

In short, I loved the leather. To get an Apple-made leather cover for the iPad mini, though, you need to buy the Smart Case, which is a case, and regular readers will know I’m not so hot on cases thanks to their usual bulk and weight.

So how does the crazily overpriced Smart Case shape up? Pretty damn well.

The Smart Case is a leather cover for the front and back of the iPad mini (retina or otherwise). The iPad slips in and is held in place by leathery friction, sitting in the rear shell like a crème brûlée in a ramekin, complete with a little rim at the edges to protect the iPad’s screen when it’s face down, and also to offer a little extra grip for your fingers. 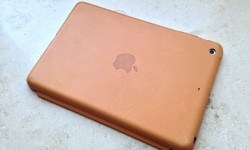 The font of the case is divided into three panels, just like the Smart Cover, and these fold up to make a triangle-section stand for moving-watching or typing. All ports are accessible, with the sleep and volume buttons covered by raised, lozenge-shaped bumps.

Inside, the inner surface of the front cover is either real microfiber or leather made to act like it, and it’ll keep your screen clean. On of the things I don’t like about a lot of cases is that they don’t clean the screen, and I’m always amazed at how quickly it gets filthy.

First up, from the second you slip your iPad mini into this case you’ll love the feel. Apple’s leather suppliers have come up with something that’s both soft and tough. It’s stiff, and yet has the feel of the skin of a live dolphin (probably – I’ve never manhandled the cutest of cetaceans outside of my Eco-Godzilla dreams). 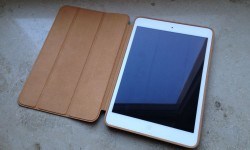 The cutouts for the dual mics, the speakers and other ports are absurdly accurate, lining up perfectly with even the teeny mic holes, and the whole thing has the level of Apple polish that applies to almost all of its products.

Now, I also have a couple of old Smart Covers laying around from use with my old mini, so how does the Smart Case compare?

First, they’re not leather, which means that they can be put in a sink full of hot soapy water and scrubbed with a nylon brush to take out the finger-grease that accumulates in the microfiber pile. You can’t do that with leather. Then again, my old leather Smart Cover is still going strong without any noticeable outflowing of effluent and I’ve had it for a few years now.

Then there’s weight. If you pick up the cases side-by-side you’ll notice a difference immediately, but in use I don’t hate the weight of the Smart Case. It’s light enough (109 grams on my kitchen scale) that, although it adds a significant percentage to the weight of the whole package (around 25% to the 340-gram cellular Retina mini) it’s not nearly as noticeable as many “ultra light” third party cases.

The wraparound shell also offers a lot more protection than the Smart Cover, which really only saves the screen from frontal assault. The naked mini is actually super tough. I’ve mentioned before one of my worst mishaps, wherein I knocked the mini off the top of the refrigerator and onto the tiled kitchen floor five feet below. It landed corner first, but the glass remained un-cracked, and the corner was dented much less than I would have expected (although the corner of the screen has been pushed up slightly, lending it a curve that can be seen if you catch the light right).

But this shell protects every part of the iPad within. And the fact that it’s an all-in-one design with the cover attached to the back means that you can also use the concertinaed cover as a handle while reading.

And if you don’t want to use the iPad whilst it sits inside the case? No problem: It slips in and out real easily thanks to the lipless design.

The worst part of the Smart Case is the same as the worst part of the Smart Cover: the fold. The three-panel Toblerone seems fairly sturdy, but comes apart whenever you put any real weight on it. Compared to the four-panel design of the big original, which wrapped over itself, this one is pathetic. I have no trouble using it to stand the iPad up for movie-watching, but for typing or propping it up on your chest while you read in bed, its useless.

You’re also barred from using many docks thanks to the thickness of the cover, which may or may not matter to you, and the buttons for volume and sleep are much harder to press than they would be if uncovered.

I was on the fence about buying this case, especially as I usually prefer nothing but a Smart Cover for my iPads (even the big ol’ iPads 2 and 3). But while €70 (yes, it’s almost $95 in Europe) is far too high a price for any cover, you do get something approaching your money’s worth. That is to say, I’m glad I bought it, and while I’ve taken it off a few times around the house in favor of the Smart Cover, the new Smart Case will likely be my default case for the foreseeable future. Unless Apple makes a leather Smart Cover, I guess.