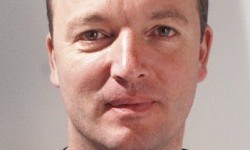 Sir Jonathan Ive is extremely self-effacing. The only time he says “I” is when he’s talking about the iPhone or iPad. Talking about his work, he replaces “I” with “we.” It’s always about his team, his collaborators, and Apple, the company he works for. For Jony, it’s all about the work.

As senior vice president of industrial design at Apple, the world’s most valuable company, he’s been the world’s leading technology innovator for more than two decades. He’s led the design of a string of iconic products: the iMac, iPod, iPhone and iPad, plus a score of other innovations in between. He’s won every design award under the sun. He’s even been knighted.

In 2011, Sir Jonathan Ive was promoted to Apple’s overall design guru, in charge of both hardware and software. It was a position formerly held by Apple co-founder Steve Jobs. Jony provides direction and leadership for industrial design, the group primarily responsible for hardware, as well as the human interface software teams. Hardware and software have traditionally been run as separate divisions at Apple. Only one man straddled both groups — Steve Jobs. Jony has stepped into the role that Jobs left with his passing. Tim Cook is CEO, but Jony is Apple’s creative driving force. He’s Apple’s MVP.

You wouldn’t know it if you met him. Born in Chingford, Essex, the 43-year-old Brit is quiet, even shy. He’s super friendly and soft spoken. He is extremely private. Even Apple says it doesn’t know his precise date of birth. He dresses in jeans and T-shirts and always seems to be carrying something in a plastic bag. He speaks softly but he doesn’t look like a wallflower: he’s big and muscular, a legacy of a lifetime working out. He has close-cropped hair, which might make him look menacing if he wasn’t so obviously a nice guy.

Jony is the most celebrated designer of his generation. In 2002, he was named the first Designer of the Year by the Design Museum, which he won again in 2003. That year he was inducted as a member of the Royal Designers for Industry (extremely prestigious). The following year he was given the Royal Society of the Art’s Benjamin Franklin Medal and the BBC named him the “Most Influential Person on British Culture,” beating out JK Rowling and Ricky Gervais.

In 2005, Jony was presented with three Silver Pencils from the British Design & Art Direction (D&AD) association, some of the most prestigious awards in the industry. In 2006, he got a fourth, the most Silver Pencils ever awarded to an individual. One Silver Pencil is a career maker; four the mark of an off-the-charts genius. He subsequently got six Black Pencils, more than anyone else, ever. Jony has a record number of D&AD awards; and he got them in a stretch of just 10 years. In 2006, he was made a Commander of the British Empire; and in 2010 he was knighted by Princess Anne at Buckingham Palace. By March 2013, he was named in more than 600 design and utility patents.

In 2011, D&AD bestowed another giant award on Jony: it named Apple’s design team the best design studio of the last 50 years. It was one of the first public recognitions for the group as a whole, and Apple felt the award was important enough to fly the normally reclusive, ultra secretive group en masse to London to receive it — the first time ever.

While racking up awards, he’s helped push Apple’s sales off the charts. In the nearly two decades that Jony has been at Apple, the company has pulled back from the brink of bankruptcy and is now one of the world’s most valuable companies. In 1992, the year he joined Apple as a designer, the company made $530 million profit selling beige computers. In 2012, Apple’s made $41.7 billion profit on $156.5 billion revenue. Yeah, billion!

The company makes gorgeous products that compel customers to camp out overnight and sometimes even riot. AAPL, as it is listed on the New York Stock Exchange, currently has a market cap of about $475 billion, making it the biggest company on the planet after the oil giant Exxon.

A lot of this had to do with Steve Jobs of course, the genius who toiled for three decades to bring personal computers to the masses. Jobs always had an eye for talent, launching Apple in 1977 with the hardware genius Steve Wozniak. For the last dozen years, his chief creative partner at Apple was Jony Ive. Jony is a genuinely original thinker. His products are not just the same old things repackaged to look new; they are new. They are products no one could have imagined a few years ago.