A couple of weeks ago, I reviewed the Maclocks Lockable Cover for Retina MacBook Pro, and although I had a lot of praise for it, I mentioned it my verdict that there was another Maclocks lock I preferred. That’s the Wedge Lock Bracket, which is the closest you’ll get to an integrated lock for your Retina MacBook Pro.

Older MacBook Pros — those that don’t have a Retina display — have a Kensington lock built-in, but in an effort to save space and make the new models really thin, Apple did away with that, as well as things like FireWire, traditional hard-disk drives, and the optical drive.

That poses a security risk. If you work in a public place, or you frequent to Starbucks to get stuff done while on a caffeine high, then you need a way to prevent your MacBook Pro from being stolen when you leave it unattended.

And I think the Wedge Lock Bracket, which screws into the bottom of your MacBook Pro and almost looks like it’s a part of it, is the best and most elegant solution.

But while it may take just a couple of minutes to apply, the Bracket is incredibly secure. Once your MacBook Pro is locked at your desk or on a table, the only ways to take it away would be to unlock it or remove the four screws securing the Bracket to your device.

Pentalobe screwdrivers aren’t exactly all that common, but even if the Starbucks snatcher is carrying one, they won’t have time to remove the bracket and get away with your machine before you or someone else spots them.

There’s no chance of them breaking the Bracket, either, because the high-grade aerospace aluminum it’s made out of is incredible robust.

Another great thing about the Wedge Lock is that it looks terrific; I don’t think you’ll find a MacBook Pro lock that looks this good when it’s at work. Because it’s made of aluminum, it almost looks like it has always been a part of your machine, and its footprint is so small it’s hardly noticeable while your notebook is flat on your desk.

The Bracket is just 1mm thick, so it adds very little bulk — certainly not enough that it will no longer fit in your back or case — and it weighs less than 0.1 pounds. It also comes with a 6-foot security cable with two keys. 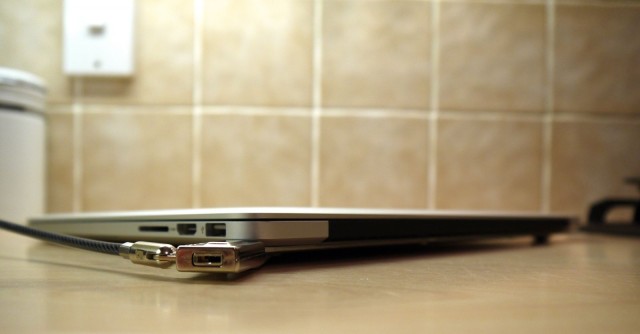 The Bracket does elevate your MacBook Pro ever so slightly at the back, but this is a pro rather than a con. It makes typing that little bit more comfortable, and it provides better ventilation for the underside of your machine.

Um… You need to be able to use a screwdriver?

Unless you want protection for your Retina MacBook Pro as well as a lock — in which case you should go for the Maclocks Lockable Cover — I don’t see any reason why you wouldn’t want to buy the Wedge Lock Bracket.

Its design is perfectly suited to the MacBook Pro, it’s thin and light and it won’t get in your way, and it’s excellent at doing the job it’s intended to do — providing your machine with a built-in security lock that will prevent it from being stolen. If Apple made an add-on security lock, I imagine it would be very similar to this one.

I’ve been using it for several months, and I can’t think of anything bad to say about it. You might argue that its $59.95 price tag is a little steep, but really that’s a small fee to pay to keep your expensive MacBook Pro safe.