When Everpix announced its shutdown this week, the Internet Sadness Factor spun the dial up to its highest point since the original demise of Del.icio.us, and the euthanization of Loren Brichter’s Tweetie for iPad. I was a lover of the service, and now I, like you, am searching for an alternative.

The good news is that there are plenty of services trying to solve the same problem as Everpix: how to organize your overwhelming mountain of digital photos. The bad news is that none of them is as easy to use as Everpix.

If you want a great head-to-head comparison of the alternatives, take a look at The Verge’s article from the end of August. This article won’t be a feature-for-feature rundown. Instead I’m going to look at some of the good and bad points of the remaining competition. Hopefully I can help you to find something you’ll like.

So what was it that made Everpix so good? Here’s a list:

But it wasn’t all rosy. Deleting photos was all but impossible, even in the fuller-featured web interface. And drilling down to individual sources (your Instagrams, your iPhoto albums) was possible but hardly intuitive, despite at least one redesign of the system, and at least one of the apps here is better at a lot of things the Everpix was weak at.

Loom is the other obvious contender here, and sits somewhere between Everpix and Picturelife in terms of features. The central metaphor is the timeline, which organizes your pictures by day in one long list. This view is fast and a great way to browse pictures, but limited when it comes to narrowing down pictures from a certain date. Weirder still is that you pictures are split up depending on which device they came from, with a separate sidebar entry for your iPhone, iPad and so on.

The app does a fine job of uploading pictures, though, but doesn’t integrate with Instagram, Facebook and the rest. Neither does it support video (yet, although you can upload videos for storage, you can’t view them).

Loom also lets you download your pictures by album, which seems unique amongst this group.

Pricing is free for up to 5GB, $4 per month for 50GB (my current plan) and $10 per month for 250GB. It works, but as it doesn’t suck in your Flickr or Instagram photos, or send you a Flashback-style e-mail, it really doesn’t do any better than the free and superior Flickr. This is a shame as the app has a lot of promise. 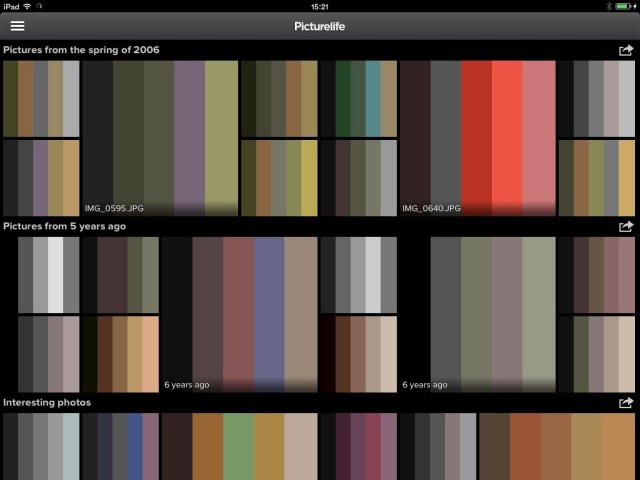 Picturelife is a lot more like an actual photo-organizing app than Everpix, to the extent that it even lets you edit and filter your photos. But for organization it comes pretty close to Everpix, with the big exception of storage space.

Picturelife has 5GB of free storage, 100GB for $7 per month, and 300GB for $15 per month. This sets my mind at rest that it won’t be disappearing soon (although Everpix was making enough to pay its bills apparently, so we should assume nothing), but $15 per month is steep for yet another subscription service.

Feature-wise, Picturelife has a great uploader, draws from all your social apps, de-dupes your photos (the de-duper seems to be getting better all the time), supports RAW and video, and has a Flashback-style daily e-mail of your old pictures.

The iOS app is pretty good. Once you’ve set your sources you’re done, with no need to tweak anything once it’s set up, just like Everpix. You can also import from Flickr, and if you have your Flickr iPhone set to auto-upload then your pictures can all come from there, saving you bandwidth and hassle

The main timeline view shows a grid of dates, and you can drill down to see pictures day by day. Or you can explore using the Memories and Discover views. Discover is my favorite: it mixes today historical pictures with “interesting” photos, or pictures of “beautiful people.” It’s a lot of fun.

And finally, there’s a daily e-mail showing you pictures form the past, kind of a mail-out version of the Discover tab in the app.

Flickr is looking like my front runner so far. It has enough storage (1TB) that you’ll effectively never fill it, and it has a great iOS app which will auto-upload all your photos to the service. In the past I have used Flickr as a gallery for the best of my pictures, but now I’m uploading everything – and because the auto-uploads are private by default, I can just keep the crappy-but-precious pictures to myself (or, using Flickr’s great privacy filters, I can share with friends or family or both).

The downside to Flickr is getting you pictures in. It’s easy from your iPhone and iPad, but not so easy from the desktop. Where the other services here have dedicated apps which run in the background and monitor your iPhoto library, plus any folders you point them at, Flickr forces you to do it yourself.

I’ve found the best way so far to be Adobe’s Lightroom. It has its own Flickr Publishing Service which will keep a collection of photos in sync with a Flickr collection, including updates and comments. If you make the local collection a Smart Collection you can just have it upload everything to Flickr.

Adding old pictures is a problem, though, as Flickr by default uses the upload date to place your pictures in your timeline. That is, even photos taken back in, say, 2003 will show up at the top of your Photo Stream. The only way around this that I know of is to use a third-party Flickr plugin from Jeffrey Friedl. It’s a little more complex but it works.

And there’s our biggest problem with Flickr: complexity. It’s fantastic, but Everpix standout feature was its set-and-forget simplicity. Flickr needs to be coddled. It’s like a Mac to Everpix’s iPad.

Finally, there’s viewing. The app is fine but again, it’s no Everpix. I use the fantastic $4 Flickring HD app which hooks into your Flickr library and presents it just like your iOS Photo Library (the iOS 6 version of it anyway, with a black background I actually prefer to iOS 7’s white one). You can pinch and swipe your way through, and even cache whole albums for offline viewing.

To sum up, then, Flickr is pretty much perfect if you only use iOS for your photography, but needs a bit of extra work if you’re using your Mac for photos, too. It has no Flashback, and isn’t so good for browsing, especially if you are using an iPad (the Flickr app is designed for the iPhone). It doesn’t de-dupe your photos (although there are services that do), and it doesn’t natively integrate with your social apps, but it does offer effectively unlimited storage.

Dropbox is a pretty decent alternative to something like Everpix, although like Flickr it’s up to you to do a lot of the work – on iOS at least: this is one place where Android is ahead of us. Dropbox has the advantage that you can keep all of your photos in local folders, and also access them from any Dropbox-compatible app on iOS.

Viewing photos on the web is actually a pretty great experience. Dropbox collects all of your photos together onto one virtual pool, no matter where they’re buried in your Dropbox folder structure. From here you can make albums which use the original files as sources, but without moving them. Thus the same picture can be in several albums. These albums can also be shared.

But iOS doesn’t support these Albums yet (Android does), and although you can kind of view them using mobile Safari it doesn’t work well at all. This means you’re stuck making albums by moving photos into folders, which is all decidedly last century.

If you can stomach it, though, then you might like to use Dropbox with a third party app for viewing the folders. I like Unbound HD (by the same developer as Flickring). It’s primarily a viewing app styled after the built-in Photos app, but it uses your Dropbox as its source, and can also batch upload photos.

Speaking of uploading; if you use the Dropbox app to upload your pictures from your iOS device, be aware that it renames the files. This isn’t necessarily a bad thing, just something to be aware of.

In conclusion, Dropbox has no Flashback, no way to create albums other than by making folders, it has no native way to browse lots of photos on iOS and it can’t pull from your other photo sources. It can, however, be configured with many third-party tools to integrate things like Instagram. But that kind of thing is what Everpix was created to avoid.

Photo Stream comes free with your iOS device, but it’s less of an online storage service than a way to move things around. As a conduit, though, it’s pretty great, syncing all your most recent pictures between devices and also keeping a full-resolution backup on your Mac. It’s only really worth mentioning here, though, as a source for Picturelife (and Dropbox if you are up for getting your hands dirty), but it’s definitely worth switching on if you haven’t already.

As you can see, there’s no real replacement for Everpix. At best we can use a few services to mimic its abilities. I’d say that instead of trying to force these other services to be new Everpixes, you should instead consider what you want to do. If you need nothing but a way to browse and store the pictures from your Mac and iOS devices, Loom does the job. If you also want to pull in pictures from your Foursquare, Facebook, Instagram and so on, then choose Picturelife.

Dropbox is good for plain storage, with the promise of more features in the future.

In the end, though, I’m picking Flickr, in combo with Picturelife. Flickr might be free now, but it’s clear that Yahoo is focussed on making it better and better, and I figure it’ll be around for a while yet. It also has great integration with my Lightroom library for past and future uploads, and the iOS app’s auto-upload is just plain magic, especially with my 100Mb connection at home. It’s also pretty incredible when viewed through Flickring.

And while Picturelife is pretty neat as a place to browse, it’s real value is in discovery. The iOS app misses some of the features (browsing by place) but it’s great for browsing, and there’s even a Flashback-like e-mail sent whenever there are pictures available.

But the real killer here is that Picturelife pulls from my Flickr stream, letting me just concentrate on putting my pictures in one place, and also from my Instagram, my Twitter and so on. Got the same picture in different places? No problem: Picturelife de-dupes your collection for you.

So that’s it. Until the next service comes along I guess. Now I just need these damn pictures to upload a little faster.