Warner Bros. / DC Comics-owned Vertigo has published this amazing ongoing series called Fables since 2002. Written by Bill Willingham, the stories all revolve around the idea that all the characters in fairy tales are real, and they’ve been banished to upstate New York until they can reclaim their ancestral homelands.

One of the most interesting characters is Bigby, better known as the big bad wolf from tales like “Red Riding Hood” and “The Three Little Pigs.”

Bigby is the sheriff of this winged-horse town, and he’s kind of a badass. Check out the trailer below for a glimpse of this gritty noir-thriller based on the award-winning comic, Fables.

Looks good, right? I, for one, can’t wait to see how they pull this all together. With The Walking Dead a huge critical success, Telltale has not a small bit of pressure to pull this one off. Fables is a fairly popular franchise, with a wealth of stories to pull from; it’ll be great to see this as an ongoing series.

The Fables comic book series has won over a dozen Eisner Awards–the comics industry’s Oscar equivalent–including Best Writer and Best Serialized Story. Here are the details on the story:

Set prior to the events seen in the first issue of the Fables comic book series, The Wolf Among Us puts players in the role of Bigby Wolf, a man once more infamously known as The Big Bad Wolf. Now the sheriff of a hidden community in New York City, exiled from the land of fairy tales, Bigby is tasked by the bureaucrat Snow White to keep order within a society of mythical creatures and characters trying to remain undetected in the world of the mundane. From a chain-smoking member of ‘The Three Little Pigs,’ to a car-stealing Mr. Toad itching for his next wild ride, The Wolf Among Us examines the lives of beings straight from the pages of myth and lore, now trying to survive on the meanest and most run-down streets of New York City. 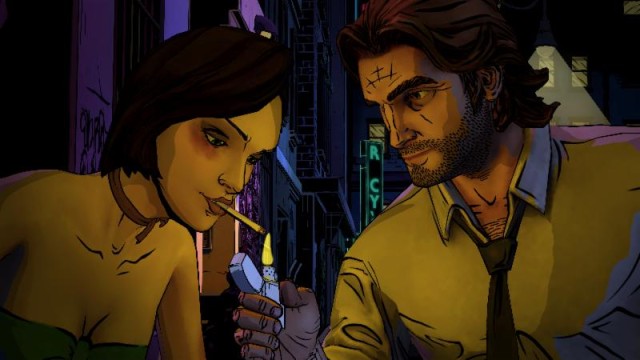 The Wolf Among Us releases this Friday, and if history repeats itself, the first episode will come free, with subsequent installments as in-app purchases.