If you’re in the mood for an old-fashioned computer role-playing game but don’t want to go through the dark rites of hardware emulation, Gurk III is a welcome alternative.

Originally released exclusively on Google Play, the Gurk games are bare-bones RPG adventures that pit a small group of adventurers with generated stats against kobolds, goblins, and all sorts of cave-lurking baddies–kind of like the old DOS Shareware title Castle of the Winds. 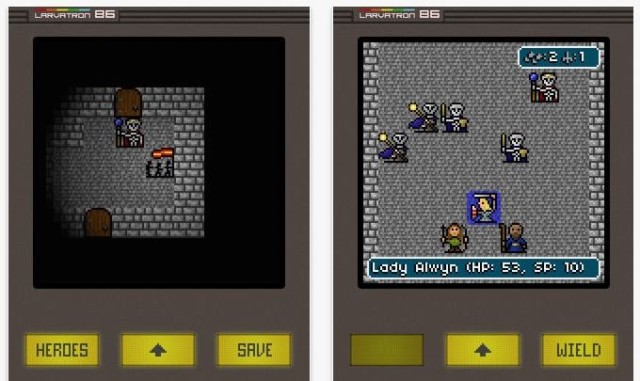 When you start your adventure, you create your party by selecting from three types of characters within three class types. Your party consists of a fighter, archer, and magic user and those classes break down based on skills and weapon proficiency. You’ll also have the ability to roll each character’s stats as many times as you want to balance health, combat capabilities and handicaps.

Don’t expect a gussied-up experience when playing Gurk III, however. It stays true to its old-school looks with a slightly cumbersome menus and a bare lists of items. The interface is almost a little too simple, and that combined with little direction on how to equip, buy, and sell gear and lead to a few mistakes early on.

Characters aren’t animated, and you can’t see your party members individually outside battle, but the simple design is very pleasing to the imagination.

Items you win in battle or find in the world don’t present their status effects or strengths without you going into another information window to check stats. This continued menu management is a little frustrating when you’re passing items between characters or comparing the potential benefits of new weapons against your old ones.

I think it’s worth working through the sometimes clumsy menus to bask in the warm glow of early-90s nostalgia. Gurk III has an often cheery but sometimes foreboding chip tune soundtrack and a very simple sprite-based design.

Characters aren’t animated, and you can’t see your party members individually outside battle, but the simple design is very pleasing to the imagination. Indeed, playing Gurk late at night took me back to my childhood when I would sneak into the computer room at night and hope the boop of the floppy disk drive wouldn’t wake anyone as I turned on Castle of the Winds.

I didn’t need splashy animations to feel the cold dread of being chased by goblins and the burst of joy at finding better equipment. Gurk III appeals to me in a similar way. It’s a little disappointing that the previous Gurk games are not available on iOS, but it is well worth playing III if you have any interest in a stat focused RPG.

You’ll gain levels, accept quests, and even invade creepy goblin breeding grounds. The one downside is that Gurk is definitely light on instruction, meaning you’ll easily lose your way if you don’t talk to every NPC in town before heading out into the open world.