The MiStand might look like a big, heavy, over-engineered iPad desk stand, and it probably is. But it has one standout feature that makes it interesting: A big magnetic ball.

The MiStand actually looks fantastic, a big angular chink of aluminum with a smallish pad that sticks to your iPad. In between the two is a big magnetic ball socket which lets you adjust the angle to anything you like. You can even remove the top plate and use that as a low-lying stand right on the desktop. 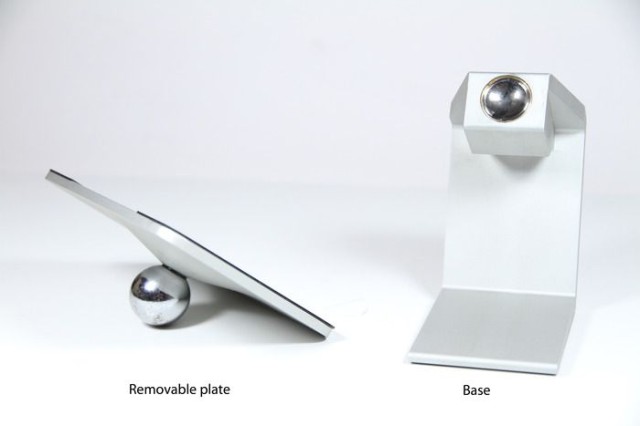 Because it uses nano-suction to stick, you can also stick non iPads onto it, making it handy for Kindles, giant phablets and even Wacom graphics tablets. Better still, it’s pretty cheap considering the sturdiness of its build: You can get a mini version for as little as £10 ($16) and a full-sized version for £40 ($65).

And of course it doubles as an excellent “executive toy,” letting you twizzle the ball as you sit at your desk thinking important thoughts. The MiStand is available to pre-order now from Kickstarter.

Number of comments on this postLeave a comment
Posted in: News Tagged: balls, gadgets, mistand