An early teardown of the iPhone 5s by research firm IHS found that even though Apple has added a new A7 processor, fingerprint sensor and improved camera to its high-end iPhone, the company pays less for the components of the iPhone 5s than it did for the iPhone 5.

The new teardown revealed that Apple pays about $191 on the components to build one 16GB iPhone 5s unit. Add in an extra eight bucks to assemble all the parts, and the $199 total it costs to build the iPhone 5s is six dollars cheaper than the $205 build price IHS estimated for the iPhone 5 last year. The teardown didn’t stop with the iPhone 5s though, as the company put the 5c under the knife as well and estimated it costs about $173 to build a 16GB iPhone 5c.

Apple sells the iPhone 5s off-contract starting at $649 with 64GB models priced at $849 even though it only costs Apple an extra $19 for the storage boost. The iPhone 5c retails between $549 and $649 without a contract.

Memory is another differing factor for the two iPhones as the 5s sports the new low power LPDDR3 RAM, as the 5c is rocking the slightly older LPDDR2 RAM. The two iPhones share a lot in common though when it comes to other components, like the unique combination of RF chips used in both the iPhone 5s and 5c that cost a total of $32. 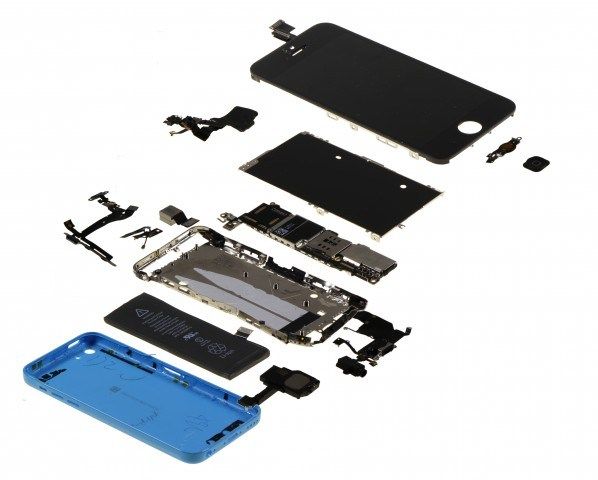