Apple never seems to be able to make enough iPhones to meet launch day demand, but it seems the Cupertino company has found that task particularly difficult this year. The iPhone 5s has proven incredibly difficult to get hold of all over the globe, while that fancy new gold model is near impossible to get hold of.

At Apple’s flagship store in San Francisco, there were just 20 gold iPhone 5s units waiting to go on sale this morning, and they were all claimed before the store even opened its doors.

It’s unclear at this point what has caused such tight supplies, but it certainly seems Apple’s latest flagship smartphone is harder to get hold of than in previous years.

Could it be that there were problems in manufacturing? Could it be down limited supplies of the Touch ID fingerprint sensor? Could it be because Apple chose to sell the new iPhone in China on launch day, where gold products are very popular? Or could it be a mixture of all those things?

Well, no one really knows at this point — but everyone who’s out there trying to pick up an iPhone 5s this morning is certainly feeling it. Cult of Mac’s own Traci Dauphin is at the flagship Apple store in San Francisco, where the line is two blocks long. Yet the store has been given just 20 gold iPhones to sell this morning. 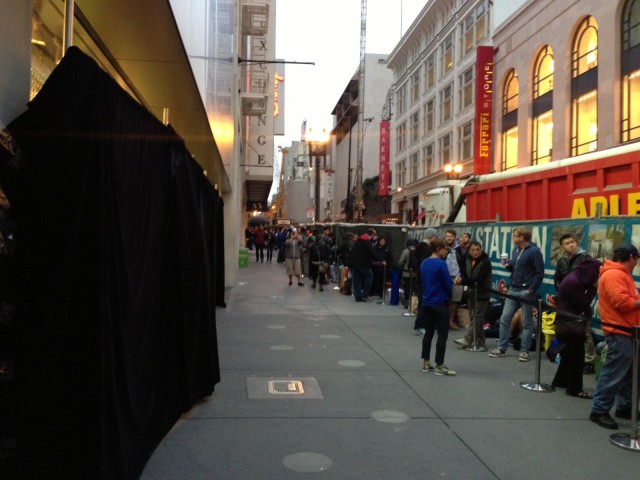 By the time Apple got to the 55th person in the line, all 20 units were claimed, so the other few hundred people waiting would have had to settle for silver, or space gray. They could choose neither, of course, and wait until the gold models are back in stock, but who knows how long that will take.

According to Sonny Dickson, the guy behind most of those leaked iPhone 5s and iPhone 5c parts we’ve seen over the past few months, Apple informed fans in Australia that there were no gold models on sale in the country at all, and that it will be three weeks before they are available.

Just heard Apple has no gold iPhones in Australia.

It’s likely Apple stores will be waiting weeks, if not months, before they begin receiving decent supplies of the iPhone 5s, which means the device will be difficult to get hold of for some time. If you hurry, you can order one from Apple’s online store and have it shipped in 7-10 business days — unless of course you want the gold one, which won’t leave the factory until October.

It’s a similar story here in the U.K., where one major carrier, O2 — which has been an iPhone partner since the original in 2007 — informed customers it wouldn’t have any iPhone 5s units in stores today and that all would have to be ordered for delivery at a later date.

Meanwhile, big retailers like Carphone Warehouse had very limited supplies, and most of the locations we spoke to on Thursday said they had only received space grey models.

At the famous glass Apple store on Fifth Avenue in New York City, sources say the iPhone lines there are the longest they’ve ever had. And as you might expect, gold is most popular there, too. “I want the gold one and everyone wants the gold one,” Anna Prymak, who has been told the gold model will sell out first, told ABC News.

Cult of Mac’s Buster Heine is at the Apple store in Biltmore, Phoenix — the most popular Apple store in Arizona — where there are just 5 gold iPhones waiting to go on sale this morning, and only a handful of silver units. Most are being forced to buy the space gray model instead.

Both gold and silver units were also sold at the only Apple store in Memphis, Tennessee, when the doors opened, our own Eli Milchman reports.

It’s no wonder Apple chose not to offer pre-orders for the iPhone 5s this time around. If it had have done, the situation would have been even worse. I think it’s safe to say if you don’t get an iPhone 5s today, you might as well forget about it for at least a couple of weeks.