There’s something beautifully absurd about the Hasselnuts Kickstarter project, which mounts your iPhone on the back of a Hasselblad 500-series film camera and uses it as an 8MP sensor for a camera that – in analog form – was considered hi-resolution enough to take photos on the moon.

Then again, if you do have an old Hassy lying around, then why not drop $250 just to get it working again? 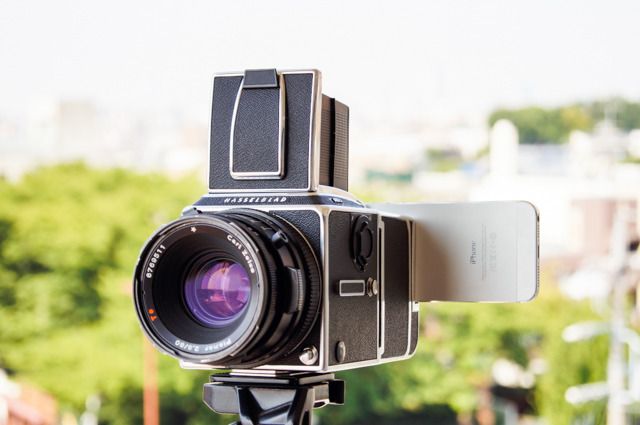 The adapter takes advantage of the camera’s interchangeable backs, which would let you fit different-sized rolls of film. The Hasselnuts doesn’t try anything fancy – it just clamps a focussing screen/magnifier to the back of the cameras and mounts the iPhone behind that, just far enough away to be able to focus on the screen. This means you get the texture and imperfections of the glass in your pictures, but it also means that you get the exact same photo you’d get if shooting on giant 120 roll film, complete with shallow depth-of-field and the angle-of-view of the original lens.

The results, as you’ll see on the website, are rather laughably Lomo-esque for a camera that could be considered the medium-format Leica, but then again, what are you going to do with a square iPhone photo other than post it to Instagram (with a #hassy tag, no doubt).

The Kickstarter campaign is now underway, with expected delivery for December of this year.