Apple has been experimenting with how it calculates chart rankings in the App Store, according to a new report from Fiksu. In the past, where an app sat on the top charts was related to its sheer amount of downloads and the daily velocity of those downloads. Now Apple is incorporating user ratings to determine rankings.

The obvious question to ask: why?

“For the first time, it appears that Apple has incorporated app ratings into their App Store Top Charts rankings,” said Fiksu, a startup that specializes in marketing mobile apps. “While this isn’t an entirely unexpected development, it’s definitely a new change — one that we caught because we are constantly monitoring App Store positioning and visibility. After some in-depth (and still ongoing) analysis by our Performance Labs team, we can conclude that Apple is testing changes to the iTunes ranking algorithm. What we don’t yet know is the entirety and permanence of these changes.” 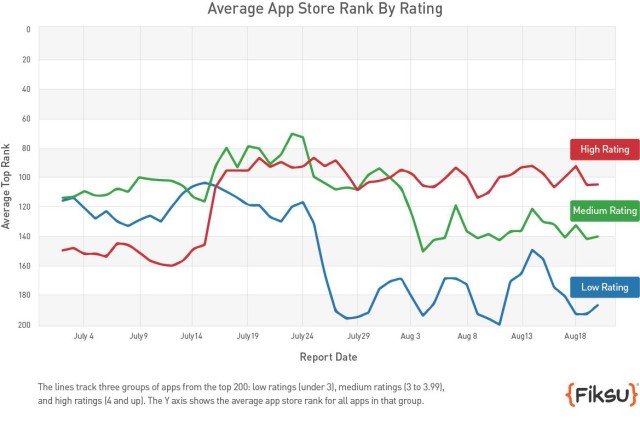 Since late July, Fiksu has been noticing apps moving up and down on the charts without any direct correlation to downloads. It turns out that poorly rated apps have been doing worse in the rankings, while apps with three-star reviews and higher have been climbing up.

Fiksu also noticed a direct connection to when apps received big updates. When a developer pushed out a new update, the app’s place on the charts would change based on if users submitted positive or negative reviews.

The change shows that Apple wants the App Store to be a place for quality, not just quantity. Apps that attempt to hijack the charts through robot downloads and other scams won’t thrive anymore—or at least as well. But it’s still on the users to leave helpful reviews, which is a whole other problem.