The high cost of Apple’s iPhone means that it struggles to compete in China, with rivals like Samsung offering a whole range of devices designed for different budgets. But a low-cost iPhone 5C could change that.

One analyst believes that as long as Apple prices it right, the device could help the Cupertino company become the number one smartphone vendor in China, crushing Samsung on the way.

Katy Huberty of Morgan Stanley has this week issued a note to clients that contains the results of an AlphaWise poll of 2,000 Chinese cellphone owners. The survey found that 23% of potential smartphone buyers will buy the iPhone anyway — even if Apple only offers a high-end device — but it gets even more interesting when a low-cost model is thrown into the mix.

Chinese customers say they would be willing to spend RMB 4,000 ($486) on the “budget” iPhone 5C, which is around 22% more than Morgan Stanley expects it to be priced. What’s more, 29% of respondents said that would buy the device if it was compatible with China Mobile’s 3G and 4G networks.

According to Huberty’s finding’s, the iPhone 5C could help Apple gain an extra 13.3 points in smartphone market share in China, and reduce Samsung’s by 6.7 points. If the handsets arrives on China Mobile, it’ll do even better, raising Apple’s share by a further 6 points, and dropping Samsung’s by another 4.6 points. 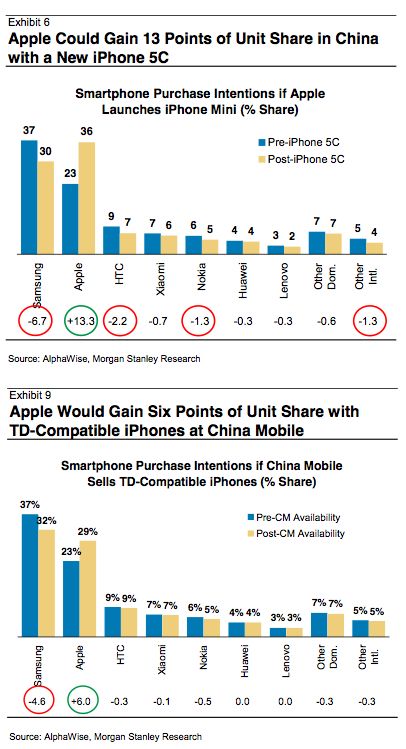 So as long as Apple gets the iPhone 5C’s price tag right in China, and it brings it to China Mobile, the world’s largest carrier, then it could overtake Samsung to become the country’s number one smartphone vendor.