Note: This article originally appeared in the Newsstand magazine” target=”_blank”>Cult of Mac Newsstand issue, Game On!. Grab yourself a copy or subscribe today.

Michael Frauenhofer is an indie developer who currently lives in Pennsylvania. He and his mom made Demon Chic, a story-based, decidedly indie game available for iPad. The game focuses on three roommates trying to live life while battling monsters, giant babies, and floating heads. It’s an experience that turns the traditional idea of monster battles on its head, as the main characters all are really fighting their own inner demons.

Demon Chic is a hallucinogenic trip through the lives of three ordinary people who must learn to live with their illness, not cure it, and find some sort of fulfilling life while doing so.

This ain’t no Angry Birds sequel, folks, so buckle up.

“The three main characters’ problems are not conventionally solvable or beatable, in a traditional RPG sense,” said Frauenhofer.

Frauenhofer lived in Rhode Island and his mom lived in New York while making Demon Chic. His mother had her own software company that made educational apps for Palm devices, but wanted to move to iOS development, figuring that games were the way to do so. So she turned to her gamer son, who was just about to graduate college, for some ideas.

For his part, Frauenhofer had wanted to make games since he was seven years old. Majoring in fiction, however, didn’t really prepare him for the coding side of things. He ended up writing the script, making original music for the game, and drew the rotoscoped sketch-style art for the interludes. He also rounded up some artistic friends for more artwork and music. 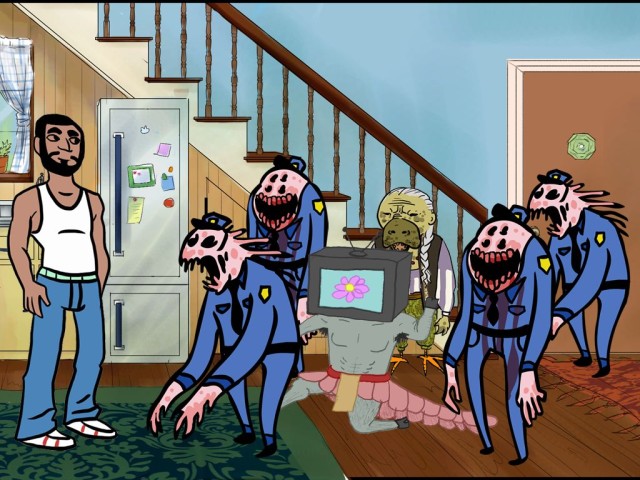 “The aesthetic of Demon Chic came to me in a dream I had,” he told us, “where an old man in a dress burned giant spiders with a cigarette in a run-down house and when I woke up I just felt like that could be an awesome video game.”

Frauenhofer had just finished a novella for his thesis about three friends dealing with mental illness. “It was a very slow and sad book full of talking,” he said, “so I thought it might make for an interesting blend with the aesthetic of the dream in the form of an action-RPG.”

He was able to make a game about people that don’t often star in role playing games, normal folk with real human problems like poverty and mental illness. The title of the game comes from something one of the main characters says in a scene that was eventually cut from the game.

“The three main characters’ problems are not conventionally solvable or beatable, in a traditional RPG sense,” said Frauenhofer. “They will probably all hallucinate terrible demons for the rest of their lives, feel really depressed sometimes, all those horrible things. They try to proceed largely by doing what they can to ignore it, though, sort of coping by living as much as possible in the cracks between the bad times, ignoring their visions as much as possible.” 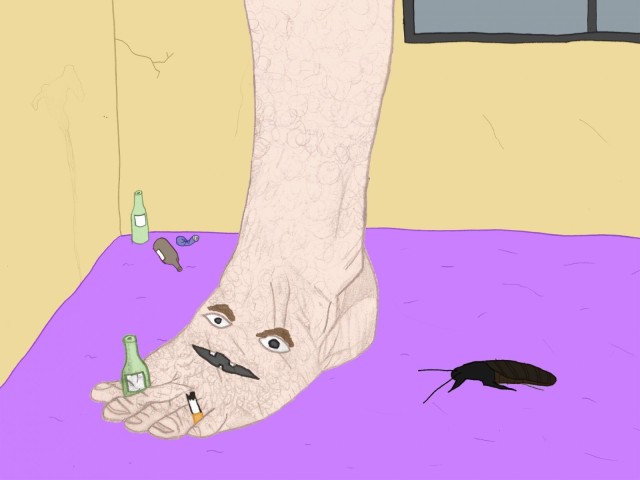 Frauenhofer calls this lifestyle “demon chic.” He tried to create a narrative about mental illness that went against the traditional, Hollywood take in films like A Beautiful Mind.

“I wanted to take something that was a realistic, authentic portrayal,” he said, “and have it sort of hazily fade between that authenticity and a totally abstracted surreal state, using multiple characters with different experiences of mental illness from each other, to try to take it away from just being a sad disease narrative but emphasize that there’s a big range of experiences people can have.”

“The aesthetic of Demon Chic came to me in a dream I had,” he told us, “where an old man in a dress burned giant spiders with a cigarette in a run-down house and when I woke up I just felt like that could be an awesome video game.”

He emphasizes that the real takeaway message from Demon Chic is that while many people can figure out how to cope with mental illness and have some happiness in their lives, it’s not in a pretend “it will be all ok” way. Mental illness is not a simple problem with a simple answer, but it can be dealt with as part of the normal human experience.

The team’s next game, One Way Trip, should release in 2014 on iOS, Mac, PC, and possibly Sony’s Vita handheld. “It tells the story of two brothers that discover they have been poisoned in a mass attack and only have six hours left to live,” said Frauenhofer, “during which time they will be basically constantly tripping; based on your choices, it can be a succession of surreal neon laser-gun battles with all manner of fantastical boss characters or a quiet, small-scale attempt at Warren Spector’s ideal of a One City Block game, in which you and your neighbors deal with what’s going on as you face the prospect of your own end.”

Demon Chic is available now in the App Store for $4.99.