I’ve just spent the last several hours knee-deep in the drek of post-magic Seattle, mixing and fighting with dwarves, trolls, mages, and deckers, and I’m here to tell you it’s utterly wiz.

Shadowrun Returns is out now on Steam for Mac and PC and should be headed to iPad and Android soon, as well. In my short time with the game, I’ve got to say that I’m deeply impressed.

Every written line, all the dialogue, the visuals, are pure Shadowrun, down to the totem poles on the corners of downtown Seattle and the angry patois of the citizen characters running in the shadows beneath the megacorps who care only about nuyen, the currency of the age.

The music and the visuals are fantastic, conveying a sense of dread and decay in every environment, but, honestly, Shadowrun Returns shines due to its fictional setting and attention to storytelling.

I’m hooked, and can’t wait to find out what happens next.

There’s a murder mystery to be solved, you see, and it’s up to the character you create to find out who killed Sam Watt, an old buddy you ran with back in the day. He’s turned up dead, but he left you a message before he went, sending you off on a classic tabletop gaming campaign straight out of the pen and paper scene the original game came from.

So far, I’ve made friends with a Dwarf coroner, helped a young woman out of a tight situation, and gotten on the bad side of a Troll detective. All in all, a good few hours of work.

The combat is strategic, turn-based, and feels very XCOM in its execution. You’ll control every NPC in your squad, moving in and out of cover, and playing to each unit’s strengths and weaknesses. Your race and character class will have some effect here, adding to the strategy you choose when fighting off gangsters, shadowy corporate lackeys, and the like. 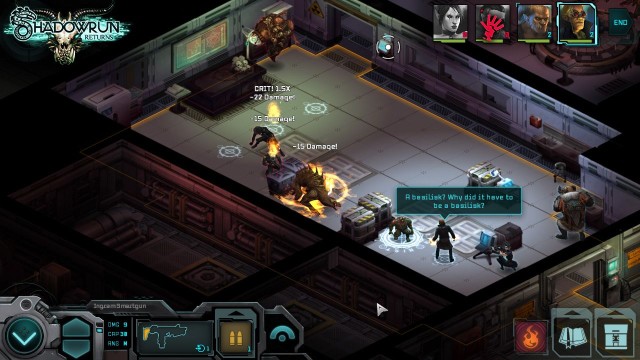 What moves the story along is mostly the written word, though, and quite a bit of it. This is the direct line from the original pen and paper RPG that Shadowrun began as, through the novelizations in the late 1990s, right on to the celebrated SNES version of Shadowrun.

This is the direct line from the original pen and paper RPG that Shadowrun began as, through the novelizations in the late 1990s, right on to the celebrated SNES version of Shadowrun.

Maybe it’s my nostalgic love for the Shadowrun novels of the 90s, but Shadowrun Returns seems to hit all the right notes. All of the writing–the slang, the noir-influenced dialogue, the wry black humor–is well done. There aren’t any other story-based games that I’ve played that are this well-written.

If you’re looking for an action-packed game full of shooting and explosions, this isn’t it. However, if you want a smart, well-constructed murder mystery set in a fully realized alternate reality, full of hackers and elves, Shadowrun Returns will float your boat.

Even better? There’s a campaign editor that allows you–or any one of a ton of talented folks on Steam–to create your own Shadowrun campaign. This isn’t just a game, but a platform, apparently, and the stories that can be told here, just like in the original game, are endless. Today’s release is but one campaign, no matter how delightful and well constructed. There’s already a level you can download that recreates the classic SNES version in the new style, using the editing tools. I can’t wait to see what kind of stories come out of this brilliant system; maybe I’ll even pen a few myself.

Bottom line, Shadowrun Returns is a landmark game in the history of the Shadowrun franchise. Harebrained Schemes has created a game true to the original that modern gamers can embrace.