It’s fast turning into “Camera Monday” here at Cult of Mac Spain, and so I shall continue unapologetically into the next photo-themed subject: the OpenReflex, an open-source, 3-D-printed SLR from model making supremo Léo Marius.

I just got through building a Lomo Konstruktor, an amazing kit-based camera that takes 1–2 hours to build (I’ll review it as soon as I finish a film and get it processed). But whenever I make a kit I always feel a little like a fraud – I’m not really making my own camera from scratch – I’m just doing the job of some poor line worker in a Chinese factory.

The OpenReflex actually reminds me quite a lot of the Konstruktor when the parts are laid out, but that’s to be expected. After all, all film SLRs are just light-tight boxes with a mirror box, a mechanism to hold and move the film and a shutter. 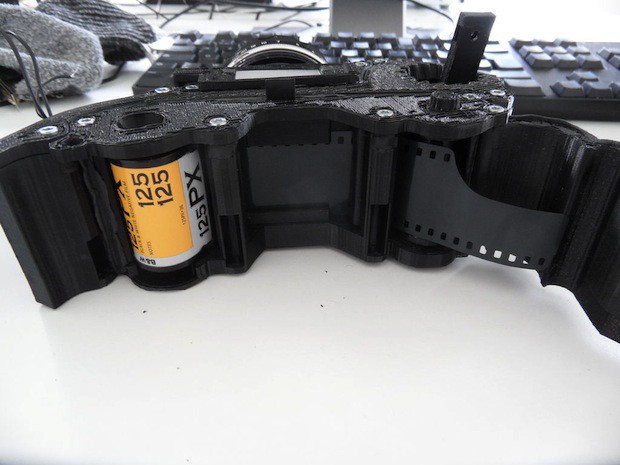 To make this camera you’ll need a 3-D printer, but after that it’s fairly easy: print out the parts and put them together. Then run a film through the thing. I can imagine that the feeling when you see your first pictures from this thing is a pretty great feeling indeed.

Like the Lomo, the shutter speed is fixed (1/60th/sec in this case), but unlike the Lomo you can mount any lens on it. Well, any Nikon lens (although you could clearly print an alternative to the Nikon ring included in the plans), but that still means you can adjust the aperture instead of relying on the hug he exposure latitude of modern print film to get a decent shot.

And this brings up one interesting subject: Copyright. Clearly printing a Nikon-compatible camera for your own use is perfectly legal (I’m not a lawyer, but I do play one in the shower in the mornings: “Charlie, please relate to the court your recollection of this morning’s hair washing. Did you or did you not use conditioner?” “Objection!” “Objection overruled!” Etc.), and this is something we’ll see more of in the future. But how will hardware makers stop the files for their designs being distributed? After all, the movie and music industries lost control years ago. What’s to stop people from pirating simple physical goods?

Anyway, ShowerLawyering aside, this is pretty damn neat, and even if you don’t have a 3-D printer, you might want to check out the workings of this clever device over on Instructables. It’s worth it.