iOS 7 beta is fresh out of the gate, and already we’re finding a bunch of hidden and new features bundled into Apple’s latest revolution in mobile operating system software for iPhone. While we can’t guarantee these will work the same way–or even exist, to be honest–when iOS 7 comes out for real this coming fall, it’s a ton of fun dropping into the features and playing around a bit.

Be sure you don’t use iOS 7 beta for anything mission critical, as it’s still not quite ready for prime time, and it could mess your data up in some way unexpected.

That said, let’s look at five hidden secrets in the new beta for iOS 7, shall we?

In OS X, you can create a mailbox with a bunch of filtering rules to help you gather together just email you’re interested in into one place.

iOS 7 beta doesn’t let you create your own smart mailbox, though. Rather, it has four or five new “mailboxes” that filter your incoming email into new categories, like Flagged email, email with attachments, or others. Here’s where to find, and ultimately enable, these new mailboxes in iOS 7 beta.

Tap into the new iOS 7 Mail app, and you’ll see a familiar list of All Inboxes, Inboxes for each email account you add to your iPhone, and a VIP mailbox, the “smart” mailbox that was introduced in iOS 6.

To find the newly added smart mailboxes, simply tap on the Edit button (more of a word) in the upper right corner. The mailboxes section will expand, letting you tap the Flagged, Unread, To or CC, Attachments, All Drafts, All Sent, and All Trash smart mailboxes.

Tap each of the ones you want to enable, and then hit the Done button in the upper right corner. Now, when you look at your Mailbox view, you’ll see these new ones ready for you to use. Tap on any of them, and you’ll see just the email that fits that smart mailbox.

Mark All Mail Messages As Read 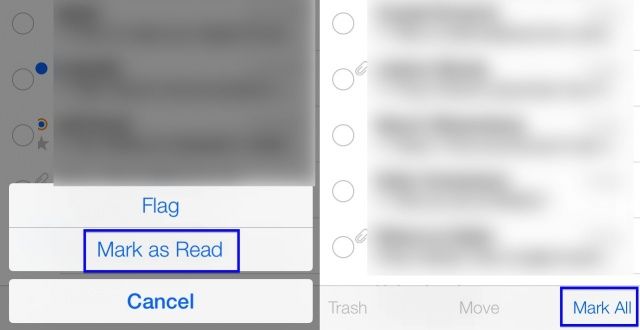 Next, let’s check out Mail, the built-in app for checking and sending your email from Apple. One of the biggest things I’ve always wished for in the previous app is a way to mark all the messages in my inbox as read in one fell swoop.

It looks like, in iOS 7 beta, anyway, that you can do just that. Here’s how.

Once you’ve launched Mail on your iPhone, tap into one of your email accounts, or the All Mail account. Once in that Inbox or All Inboxes, tap the Edit button in the upper right corner of the newly redesigned screen. Large circles will appear to the left of your messages, which will slide out to the right themselves. You can tap the circles to then Mark, Move or Trash the individual messages.

If you want to mark all the email messages at once, though, tap the Edit button, then the Mark All button in the lower right of the screen. When you do that, you’ll then be able to tap the Flag or Mark as Read button below, to do either one to all the messages in that Inbox or list.

Use AirDrop And Set Privacy Preferences In Control Center 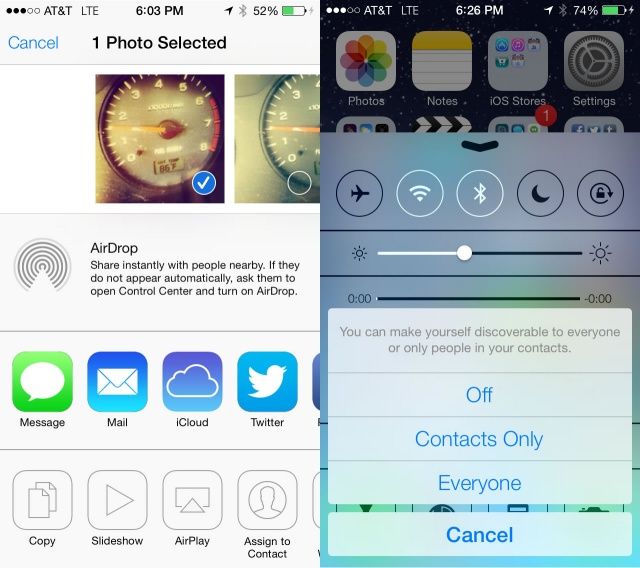 One of the most exciting features in the upcoming iOS 7, and it’s in the beta as well, is AirDrop, Apple’s configuration-free file sharing protocol that has been on OS X for a while. It’s making its way to iOS 7, and here’s how to use it in the beta, as well as how to set the privacy settings for the protocol.

When you’re browsing a photo in the Photos app in iOS 7 beta, tap the new share icon, which now looks like a proper rectangle with an arrow pointing straight up and out of it. When browsing all your photos, tap Select in the upper right, then Share in the lower left. You’ll get the same effect.

All you need to do from here is tap the AirDrop icon, and it will do a little subtle pulse, letting you know you’re offering these files to be shared over AirDrop. AirDrop can handle pretty much any file type, including Passbook passes, as you can see in the screenshot above. The person you’re sharing the files with will be notified on their iPhone, and then the files will zip over. Hooray!

Now, if you want to fine-tune the security of AirDrop, you have three options: Off, Contacts Only, or Everyone. Slide your finger up from the bottom of the iOS 7 beta screen on your iPhone to bring up the Control Center, and then tap the AirDrop section on the left. Tap the option you prefer (I chose Contact Only for now), and then slide the Control Center down again.

It’s exciting to be able to share files ad-hoc like this, and I look forward to the unique ways developers will add this pretty amazing tech into their apps and games.

Block Numbers From Calling Or Messaging You 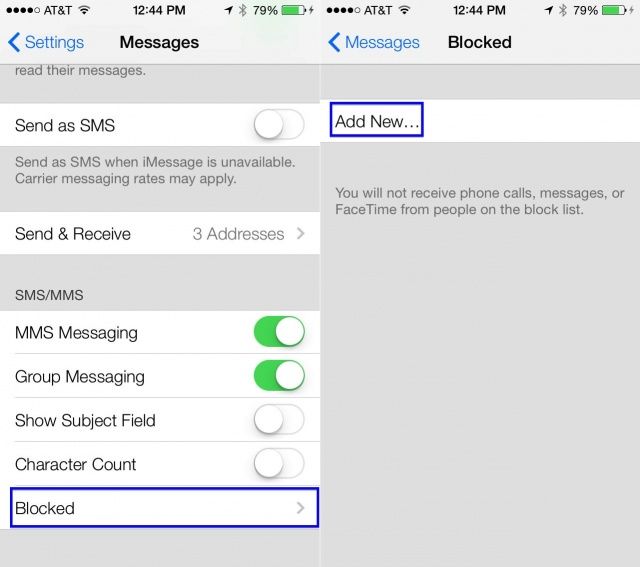 Another of the most exciting new features coming to iOS 7 is call blocking, in my opinion. To be able to keep folks from texting or calling has got to be one of the more requested features on the iPhone, since the beginning.

iOS 7 beta has two places to block numbers. Here’s where they are, and how to add numbers to your blocked list.

First up, tap into your Settings app, and then tap Messages. Scroll to the bottom and tap on Blocked. Once there, tap Add New… and then all your Contacts will slide up from the bottom, letting you choose folks in your contact list to block.

Tapping back out to the main Settings app, and then tap on Phone. Near the bottom, you’ll see the place to tap, called Blocked. Tap there, and then choose a number from your Contacts, as above with Messages.

It seems a bit counter-intuitive to block Contacts rather than recent calls or Messages, as most of the numbers I want to block aren’t folks I’ve added to my Contacts. It would be nice to have a way to do this from the Messages or Phone app, as well. Let’s hope that gets added to the beta in time.

Use Turn By Turn Walking Directions For Safer Passage 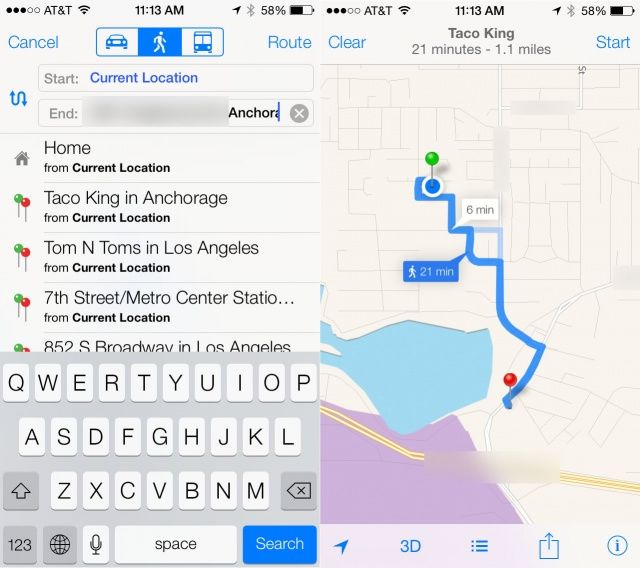 The iPhone’s built-in navigation system has profoundly changed my life. No longer do I need to plan extra time to get to a meeting so I can deal with my ability to get lost on even the most benign route in my own hometown, since I can use turn by turn spoken directions to get me to my destination.

When walking however, I’m the guy who’s usually staring down at his iPhone, waving it around in some weird figure eight pattern to resolve interference, and generally bumping into things along the way.

No longer, though, as iOS 7 beta has turn by turn walking directions. Here’s how to use them.

Launch Maps in iOS 7 beta with a tap, and then get a destination the normal way, either with Siri or via the search field. Tap on the destination pop up box and then tap, Get Directions To Here. You’ll get a walking route possible if you’re nearby, and you can tap the little waking person icon to set it. Then tap the arrow button in the upper left to start the route. Otherwise, when you hit Route, you’ll see the standard choices across the top: car, walking, public transportation. Tap on the walking person icon here, then hit Route.

Now, you’ll see the overview of your walking route. Tap on Start, and begin to follow the spoken directions. Pop in a set of headphones and put your iPhone in your pocket – you’re walking without having to look at your screen. Slick, right?

When you’re done, or want to stop the turn by turn directions, tap End in the upper left corner.

I’m planning on using this in the next unfamiliar city I visit, and see how well it steers me.