The FDA has gone after Biosense, a health startup that makes uCheck, an automated urine analyzer sold directly to end customers. You pee on a strip then use the uChek iPhone app to take a picture and analyze the contents of your urine for health info like glucose. Biosense claims that it can help detect up to 25 diseases, like diabetes, pre-clampsia, and urinary tract infection.

A letter has been sent to Biosense from FDA about its home kit + iPhone app product asking why Biosense hasn’t gotten uCheck officially sanctioned by the government.

UChek works with test strips made by Siemens AG and Bayer AG, which are only approved for visual reading and require new clearance for automated analysis, the FDA said in the letter. The agency has said it wants stricter rules for apps that directly diagnose or treat conditions, proposing in 2011 to apply similar quality standards as for heart stents, ultrasound machines and other medical devices.

“We intend to finalize the guidance this year,” Synim Rivers, an agency spokeswoman, said yesterday in an e-mail. “The FDA has proposed a regulatory approach that limits its immediate oversight to a specific, small subset of mobile medical applications that are medical devices and present the greatest risk to patient safety if they don’t work as intended.” 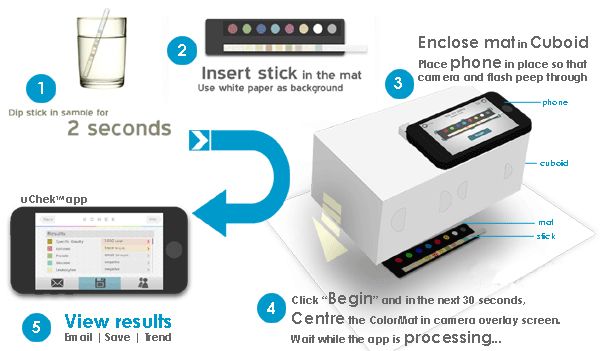 This is obviously a sensitive area as companies like Biosense are disrupting an incredibly expensive and profitable healthcare industry that’s rooted in regulation. The FDA doesn’t want uCheck upsetting all of the other companies that are making high-end equipment that does the same thing. Just another example of how smartphones are disrupting the world around us.

The uCheck iPhone app is available for free in the App Store, and the accompanying kit costs $40.

Number of comments on this postLeave a comment
Posted in: News Tagged: FDA, health