The Logitech Easy-Switch ($100) is a Bluetooth keyboard that’s designed to work with both Mac and iOS devices — at the same time. It’ll connect to up to three devices simultaneously, then it will allow you to quickly switch between them as and when you need to.

Its built to compliment your Mac, with an aluminum top cover, black accents, and black laser-etched keys that look right at home in front of an iMac or Thunderbolt Display. It has a built-in battery that’s rechargeable via USB, and it offers up to a whole year of power — depending on how you use it, of course.

The Easy-Switch also has a row of function keys, that’ll allow you to adjust brightness, control media playback and volume, and use features like Mission Control. But its best feature, at least in my opinion, is its backlit keys, which allow you to type comfortably in a dark room.

Connecting the Easy-Switch is simple, just flick its power switch and then pair it with your Mac and iOS devices — up to three at a time — like you would any other Bluetooth keyboard. It’s fast, and it never forgets.

Even if you switch it off, or you power down your connected devices, it’ll remember them and connect to them again as soon as they’re available. And according to Logitech, that Bluetooth connection will work up to 30 feet.

The Easy-Switch also looks great. In front of my trust old Cinema Display, it looks right at home — but it doesn’t stay there. Because it’s so thin and so light, I can slip it into my bag and take it with me whenever I’m taking my iPad out, so if I decide to get some work done, I can do it with real keys. 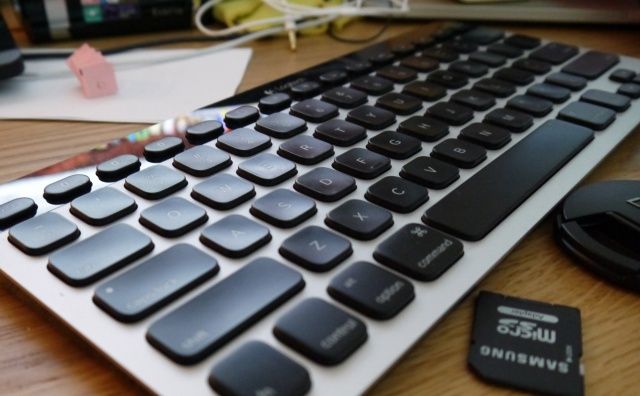 Battery life has been terrific, too. I use it for up to ten hours a day, five days a week, but I’ve only been charging it once a week. Logitech says it’ll last at least ten days, but that’s based on two hours of typing per day. I do a lot more than that, and I still get plenty of time in between charges.

And that’s with the backlit keys illuminated most of the time. Even in a relatively bright room, they light up and automatically adjust to suit the light conditions. If you want to, you can also control the brightness manually using the F8 and F9 keys.

What’s great about the Easy-Switch is that it detects your hands as they approach the keys, so if you leave it for a while and the backlit keys go out, they’ll light up automatically when you get back — without you having to actually touch a key.

But of course, the most important thing about a keyboard is its keys, and what kind of typing experience they provide. Even with all the features I’ve mentioned above, the Easy-Switch is no good if it’s horrible to type on. 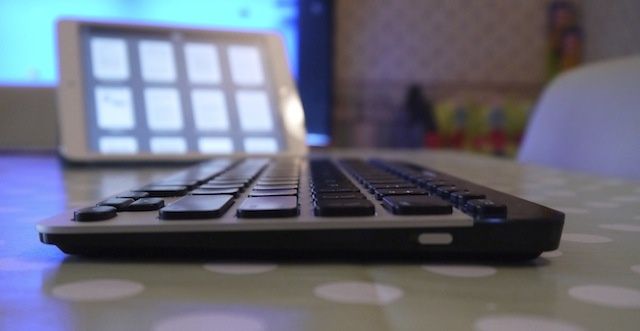 But guess what. It’s not. It’s a joy to type on. Logitech “PerfectStroke” key system “distributes typing force evenly across the key surfaces making every keystroke silent, natural and fluid — even if you strike the edge of a key,” the company says.

That’s not strictly true, because the keys aren’t silent — at least not under my big sausage fingers. But they are fluid, they feel great. In fact, the Easy-Switch doesn’t feel too dissimilar to Apple’s keyboards, but I find its concave key surfaces more comfortable.

As I said above, the Easy-Switch is by far the best keyboard I’ve ever owned. But its not without its faults. I’ve found two of them.

First, the one that sometimes bugs me, is that the Easy-Switch doesn’t let you skip tracks when you’re listening to music. Because its first three function keys are for switching between your devices, and another two are for adjusting the brightness of the backlit keys, there isn’t space for skipping keys. 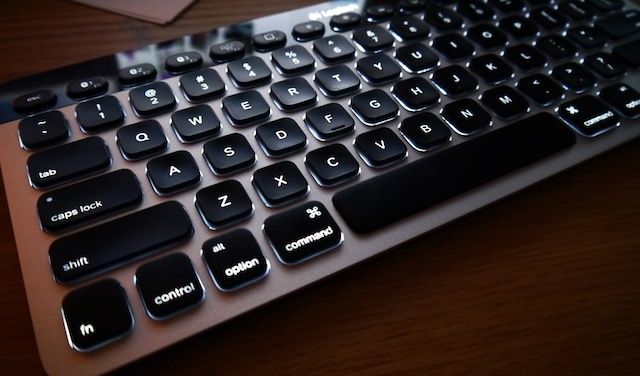 That means you have to open iTunes or Spotify or whatever else you’re listening to to skip tracks. You can play/pause tracks, and adjust volume, however.

The other downside to the Easy-Switch — which wasn’t actually a problem for me, but it could be for some — is that you cannot adjust its typing angle; it has no adjustable feet. Again, this wasn’t an issue for me — I found the typing angle to be very comfortable. But it’s something you might want to bear in mind if you type at funny angles.

I think I’ve made myself pretty clear. The Easy-Switch is fantastic. Go and buy one already.