At the opening of this year’s NFL season, we looked at how the iPad has become a popular training tool among many NFL teams. With the season over and the Super Bowl just days away, many players, coaches, and fans are already looking ahead towards the NFL draft in the spring and next season.

Next season, Apple’s tablet will be an even bigger part io the NFL and it may even revolutionize parts of the organization and even the sport of football itself. Here’s how. 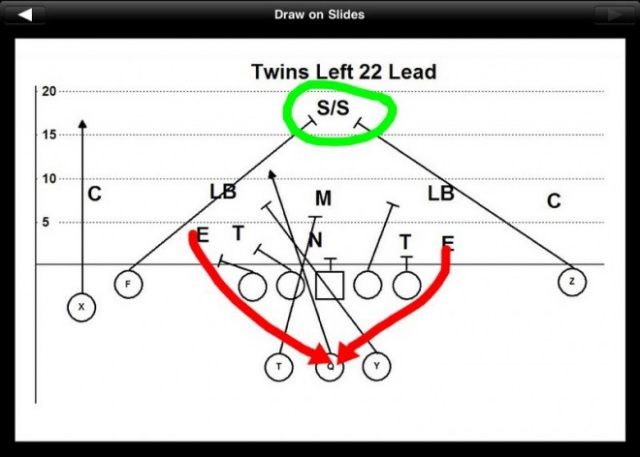 Teams began adopting the iPad as a replacement for traditional printed playbooks (which can easily top 500 pages and need to be updated and reprinted every week) during the 2011 season.

At the beginning of that season, just two teams – the Tampa Bay Buccaneers and Baltimore Ravens – had adopted the iPad as a playbook replacement. This past season, demand for the iPad by NFL teams picked up significantly and the number of teams relying on the iPad as a playbook alternative expanded to fourteen, with other teams reported to be using the iPad to augment traditional playbooks.

Next year, more teams are expected to adopt the iPad. In fact, it’s possible that every team will ditch paper playbooks for iPads. The broad adoption by NFL teams, however, is only part of the story. The league itself has big plans for the iPad when it comes to ensuring player safety and medical treatment.

Why The NFL Wants The iPad To Help Save Players’ Brains

Player safety has become a hot topic around the NFL in recent years, particularly when it comes to concussions and other head injuries.

Last spring, two former NFL players — Ray Easterling, a safety for the Atlanta Falcons in the 1970s, and Junior Seau, a linebacker who played 20 seasons in the NFL for three teams (the San Diego Chargers, the Miami Dolphins, and the New England Patriots) and who played in 12 Pro Bowls and two Super Bowls — committed suicide within just two weeks of each other. Long term effects of repeated concussions are believed to have been related to both incidents.

The suicides followed that of Dave Duerson, a former defensive back for the Chicago Bears, who committed suicide two years ago. Duerson requested that his brain be donated to to researchers exploring the links between repeated concussions and other brain injuries. According to reports, Duerson was aware of a condition known as chronic traumatic encephalopathy (often referred to as C.T.E.) and an anonymous source reported that before his death, he had expressed concern that he might have C.T.E.

Possible symptoms of C.T.E. include:

A formal diagnosis of C.T.E. can only be made by examining the brain after death, though research as recent as this month indicates that it may be possible to identify the disease using a PET scan).

Both Duerson and Seau were found to have C.T.E. during examinations of their brain tissue last year.

C.T.E. is a degenerative and incurable condition associated with repeated head trauma that can include memory loss, dementia, impaired cognitive function, and depression as well as other emotional and psychological symptoms – including an increased risk of suicide.

Its link to repeated blows to the head was initially dismissed or discredited by NFL officials and physicians, though it has gained acceptance in recent years, perhaps because of growing evidence of the condition among combat veterans.

A recent scientific study, published in the journal Brain in December, bolstered the link between repeated concussions and mild traumatic brain injury. The study examined the brains of 85 people, 68 of them (80%) men, including 33 former NFL players and 17 non-NFL football players. The study was the first to categorize the stages and progression of the disease, but it wasn’t able to conclusively demonstrate a link between C.T.E. and on-field injuries. Nor was it able to predict the risk NFL players have for developing the disorder nor explain why some players develop it while other don’t.

Easterling was one of 3,000 former players suing the league over its handling of concussions and head injuries. The high-profile lawsuits are causing disputes between the NFL and 32 insurers (past and present) about liability for the legal costs and damages. They are also forcing the NFL to look more closely at player safety issues.

That focus on safety was put to the test after allegations that the New Orleans Saints had operated a bounty system in which players were rewarded for injuring their opponents during a game. Bounty systems violate league rules and, obviously, have a direct impact on player safety. Among the NFL’s response to the system was the suspension of Saints head coach Sean Payton for the entire season – a situation that has lead to some tension for NFL officials, commissioner Roger Goddell in particular, as New Orleans prepares to host the Super Bowl this weekend.

How iPads have been used by team doctors up till now

Seeking to provide medical staff with additional data for identifying and treating injuries, including concussions, team doctors have been granted sideline access to replay videos for injury identification and diagnosing purpose.

The technique was used widely this season.

By reviewing the hit that caused an injury as well as examining the injury itself, doctors can make more accurate and informed assessments. The New York Times reported in October that the New York Giants medical staff, which typically includes around 10 doctors on the field, assigned one physician to monitor the replays during each game to ensure that all injuries are identified and treated.

Medical staff for the Giants and 15 other teams also began using iPads on the sidelines to assess concussions. The iPads are used to provide a league standard concussion test. Using the iPad helps doctors to ensure that test experiences and results are consistent from case to case. They also allow doctors to quickly and accurately compare a pre-injury baseline test result with a post-injury result following a hit, a key way to determining the severity of the concussion. Doctors also used the iPads to view player X-rays.

Next season all 32 teams are expected to use iPads to diagnose concussions.

Next season all 32 teams are expected to use iPads to diagnose concussions.

Among the player safety initiatives that the NFL is undertaking, the league signed a deal with Massachusetts-based eClinicalWorks to bring its electronic medical records (EMR) system into use for all 32 NFL teams. The contract will last ten years and is valued between $7 million and $10 million.

eClinicalWorks offers a full scale cloud-based EMR system that supports patient records, electronic prescribing, access to lab reports and X-rays, interoperability with other EMR and healthcare systems using industry standard protocols, and native iPhone and iPad apps (as well as a BlackBerry client) for mobile access. The system can also be accessed through a web browser.

The iPad is considered the most likely way that NFL team doctors will interact with the the EMR system during games and training due to the existing investment in the iPad for concussion diagnosis and X-ray data review.

One major goal of the system, as with any electronic medical records initiative, is to improve the quality of care and make injury diagnosis and treatment more efficient and effective – in this case that means both during the game and following it.

Many of the advantages of integrating EMRs in the locker room or on the sidelines are obvious. Full access to a player’s medical history – past injuries, current medical conditions, medical and surgical interventions, recovery times, current and past medications, and medication allergies – will help ensure appropriate treatment during a game or after. It also has the potential to speed up in-game diagnosis and treatment simply because that information is readily available at any time.

In a speech at the Harvard School of Public Health in November, NFL commissioner Roger Goodell noted that the league is investigating additional technologies that could be integrated into its EMR system.One possibility is the use of accelerometers or other sensors that could be integrated into player uniforms, shoulder pads, and helmets. The sensors would be able to help determine the location and force of an impact and could be used to gauge injury potential and to help diagnose concussions more quickly and more accurately.

One reason that the NFL is adopting a league-wide EMR rather than allowing each team to manage medical records for its players is that players may change teams several times over the course of their NFL careers. A league-wide system means that a player’s full medical history will easily follow them from one team to another. That ensures that team doctors have access to as much data as possible and that there is no issues related to teams using incompatible systems. It also means that doctors from a player’s new team won’t need to redo certain procedures like X-rays, CT scans, or MRIs to assess the extent of past injuries and related surgical interventions.

The bigger reason is that the EMR system will allow the league to build a vast collection of data related to player injuries. The data can then be analyzed to look for patterns. Although it will take at least a few years for the league to compile a rich set of player injury data, it will eventually be able to extrapolate a lot of useful information. If sensor data or even just video and data about plays that resulted in injuries are included, the league will be able to examine the causes of injuries in ways that haven’t been possible up to this point. That data could be used in different ways.

It’s worth noting that injury data collected and analyzed will likely have broader applications. The NFL could easily share the data with colleges, high schools, equipment manufacturers, and others. The result would be delivering useful and concrete data that might cost prohibitive for other organizations to develop on their own.

The iPad has already begun to transform the NFL at a variety of levels beyond simply replacing playbooks.

In the end, the iPad has already begun to transform the NFL at a variety of levels beyond simply replacing playbooks. Team management, enhanced injury diagnosis, and player safety are all key areas that the iPad is influencing directly or indirectly. Ultimately, the iPad and related technologies may even transform the sport of football in many more ways over the next five, ten, or twenty years.