With Tuesday’s’s announcement of a 128GB iPad 4, Apple is clearly signaling that the iPad is not only suitable for serious work, but that it can be the primary machine for many users. Most commenters have fixated on fitting extra movies and other consumables into the extra 64GB of space, but they’re forgetting about work.

In fact, I’d say that the iPad With Retina Display, as Apple now insists on calling it, is the new desktop machine, and the iPad mini is the new laptop. Why? Let me explain:

If you could live with less power, but valued portability and always having your machine with you, then you chose the laptop.

Historically (at least before Apple choked the Mac Pro and kept improving its MacBooks), the tradeoff between desktop and laptop computers was power vs. convenience. If you wanted a big screen, lots of storage or the most powerful processor then you bought a desktop. If you could live with less power, but valued portability and always having your machine with you, then you chose the laptop.

I have been using the regular iPad as my main machine for months now. In fact, if I quit using BitTorrent as a source for TV shows, I could ditch my MacBook altogether. For writing, planning, editing photos and movies the Retina iPad is more than capable. I use it for watching TV shows, movies and reading. In fact, I not only use it for work, I actually prefer it, finding that I get more done, and faster.

I was happy. Then Apple made the iPad mini.

I struggled for long weeks not to to buy one. I told myself the non-retina screen was crappy. I told myself that it would be too small. And yet every time I picked one up it felt great in my hand. Or rather, it felt almost nonexistent in my hand, so impossibly thin and light is its shell.

So I bought one. I figured I’d get the cheapest model, the 16GB with wifi. For comparison, I own a 64GB iPhone 5, and a 64GB cellular iPad 3. Buying the non-cellular, smallest-capacity mini showed just how much of a toy I expected it to be (in the end, the Las Vegas Apple Store [Hey Drew!] was out of white 16GB minis, so I bought the 32GB, and it turns out I’m glad I did).

Nobody questions it when you have an iMac and an MacBook, so why should iPads be any different?

But a strange thing happened. Like almost every journalist who has written about it, I found I used my regular iPad less and less. The mini is easier to carry with you. It fits into a pocket. It doesn’t annoy you by trying to fall out of your hand as you read.

But this isn’t yet another article about ditching the iPad for the mini. It’s about using both, and maybe ditching your Macs. Here are some Tweets in response to my question asking what the Retina iPad does better than the mini:

landscape typing & easy reading: the features I value most for business use. For personal use text clarity is key difference.

much better graphics if you are a gamer (nova 3, gta..)

Text readability, obviously. Landscape typing (but not portrait). Gaming. That’s about it.

I’d definitely rather edit on a full-size iPad, if just for accuracy!

Power. Screen size. Screen resolution. More comfortable typing. All things that the desktop historically did better than the laptop.

The extra storage space in the 128GB iPad could hold more movies, but what it’s really for is apps. Phil Schiller, from the 128GB iPad press release:

With twice the storage capacity […] enterprises, educators and artists have even more reasons to use iPad for all their business and personal needs.

I can swap movies on and off my iPad, thanks to iTunes Match and re-downloadable content. But I can’t delete the projects I have in iMovie, nor the journals I keep in iPhoto. And I’m sure there are specialist users with huge amounts of data in their specialized apps, and musicians with giant GarageBand libraries. These are the “enterprises, educators and artists” Schiller is talking about. Here’s how I use them:

The Case For Two iPads 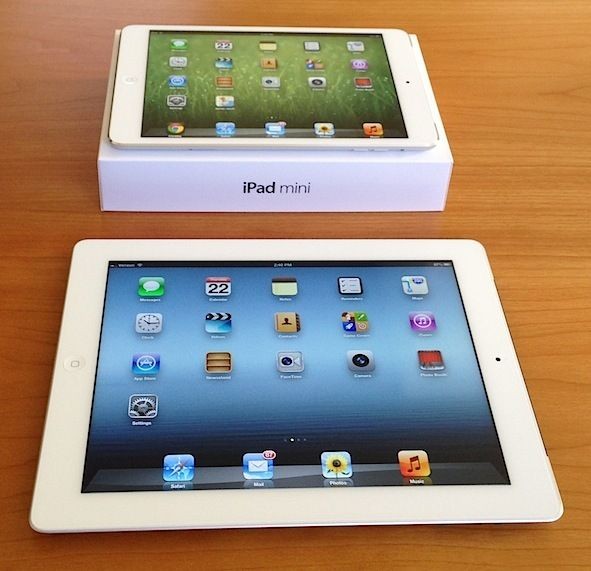 So the 128 GB iPad is the new “desktop,” with power, capacity and that gorgeous, amazing screen. And the mini is the laptop, the compromise, the little device that’s so convenient that you can forgive the fact that it contains the guts of an iPad 2.

There’s a lot of crossover between the two. I can work on the mini, but the bigger screen is more comfortable, and if I’m typing without a Bluetooth keyboard, the full-sized iPad’s soft keyboard is close to full-speed for me (editing is another matter…). And the 1GB RAM enjoyed by the bigger iPad means much less time waiting for apps (and Safari tabs) to reload – this is maybe the biggest difference between the two when working.

Maybe the biggest difference between the machines is the Retina iPad’s 1GB RAM.

The Retina iPad is clearly better for reading books and comics, but the mini is, like a laptop “good enough.” It’s also so light that it disappears as an object. It’s also easier to pull from a pocket to check maps, or to use one-handed whilst standing (the mini is vastly superior as a kitchen computer for this reason alone).

Then we get onto the dirty little subject of battery life. The mini does last a little longer than the Retina iPad, but that’s not the whole story. The iPad mini ships with an iPhone adapter. Apple surely did this to save money, and to make the shipping containers smaller, but it also demonstrates that the mini can be charged almost as quickly as an iPhone. You can use it for days and – when the battery warning finally shows – you can plug it in and it’s full again before you know it.

The Retina iPad, on the other hand, takes all night to charge. Try using it while you charge it and it’ll take even longer, the needle creeping so slowly towards the “full” mark that you’ll wonder if it’s even moving at all. I have taken to keeping my Retina iPad plugged in when watching TV shows just because it takes so long to recharge the battery afterwards.

This is the biggest marker between the “laptop” and “desktop” functions of the two machines. One is heavy and likes to be near a power outlet. The other is so light and so power-frugal that you can treat it like an iPhone, or (almost) like an e-reader.

So while it initially sounds dumb, I really can make use of two iPads.

I really can make use of two iPads.

Maybe this will change when Apple makes a Retina iPad mini that’s as thin as the current one, and that doesn’t need a shrunken car battery to run it, just as a modern-day MacBook Pro is almost a match for the current Mac Pro. But right now, I’m happy with using both a desktop and a laptop iPad. And why not? Nobody ever questioned me when I used an iMac and a MacBook, so why should it be any different with tablets?