Nearing the end of 2012, Cult of Mac has peered through the clouds of 2012 to take a look back at the best Mac Apps of 2012. While most of the popular Mac Apps continued to evolve and refine their features, a number of newcomers have sprouted up with new features and even better designs. There were some terrific releases this year that were are well worth your money, but here are the 10 best Mac Apps of 2012. 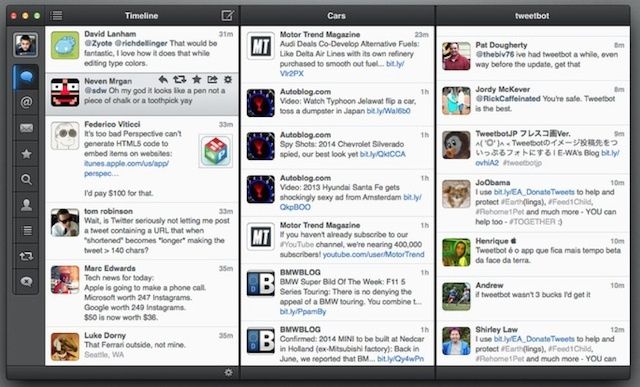 There are a ton of great Twitter clients on iOS, but for Mac? Not so much. When Tapbots announced Tweetbot for Mac this year Apple nerds across the world rejoiced. It’s lightyears ahead of Twitter’s native app and brings all of the great Tweetbot for iOS features onto a desktop.

At $19.99, Tweetbot for Mac is a bit pricey, but considering that Twitter is limiting the number of tokens all third-party apps can have, we think it’s worth supporting the Tapbots team as they provide excellent updates over the next few years. 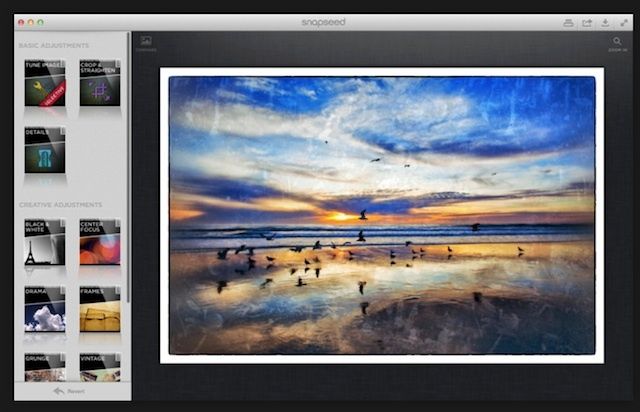 Every year I keep telling myself that I’m going to learn how to use Photoshop and all the advanced cool effects you can generate through it. I’m lazy and it never happens, but then Nik Software released Snapseed for Mac and I don’t feel like I need to anymore.

Snapseed is one of the best and easiest ways to edit photos. You can add all the crazy vintage filter type stuff that people are crazy about on Instagram, but where Snapseed really shines is its ability to do perform pinpoint adjustments to selective areas of a photo. Snapseed is nowhere close to being a Photoshop replacement, but if you’re looking to graduate from just using Instagram’s filters, Snapseed is the best app to use to learn how to take your photos to the next level. 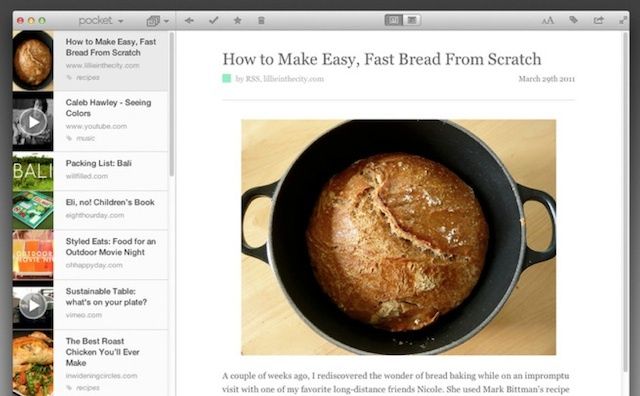 You don’t have time to read every awesome news article that flies across your browser, but with Pocket you can at least try. Pocket allows users to save articles into the app that can then be read later. It integrates with Chrome and Tweetbot so you don’t have to open the app up every 15 minutes, or you can just email article urls to Pocket and it will be added for you.

Even though Pocket is a really simple app it’s a great way to get more out of the web. Whenever you find an great article that you want to read but are to busy to get to, you can just toss it in Pocket and come back to it later, or don’t. 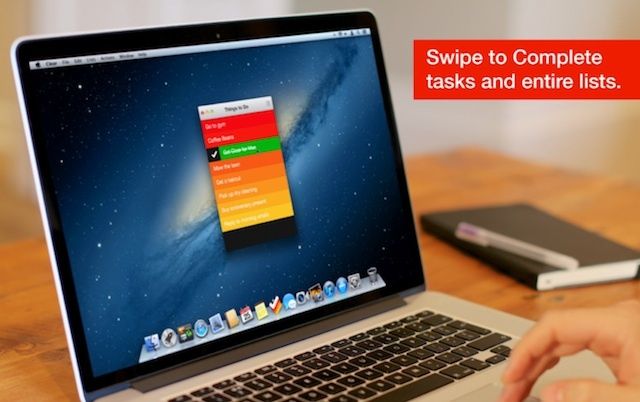 The iOS app was great, and now that it’s on Mac it’s even better. Clear for Mac is a task management/productivity app that helps you keep track of everything you need to do. Like other apps, you can add items to your to-do list, but with Clear every item is color coded so you get a color indicator as to an item’s importance – Dark red and you better get that stuff done pronto, yellow and you can slack off a bit.

Clear also has a multitude of gestures that make adding, deleting, and moving tasks super quick. It’s the easiest to use productivity app we’ve seen and its minimalist interface forces you to focus just on task. Add the fact that Clear for Mac also integrates with the iCloud so you can get your Clear list on your iPhone too and Clear is without a doubt one of the best apps to hit the Mac this year. 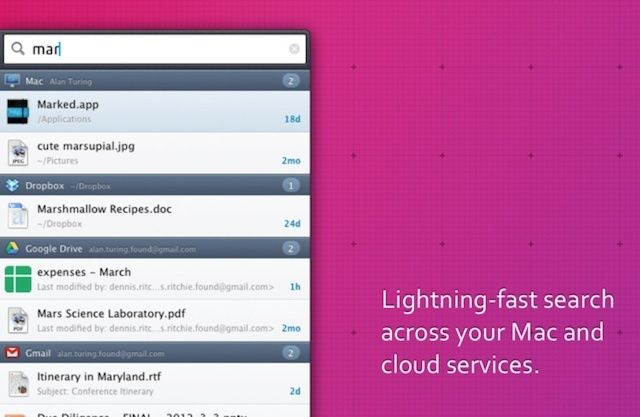 When you have a lot of documents, pictures, songs, and videos on your Mac fighting for every last kilobyte of space, finding the right file at a moment’s notice can be an impossibly long and tiring task. Found makes searching for stuff easier. Not only does it find files the same way Spotlight does, but it can also search for your stuff on Dropbox, Google Drive, Gmail or Google Docs.

Found is a lightning-fast search tool for your Mac that wants to put an end to all that rubbish and help you find your files wherever they are. It’s an awesome, easy-to-use app with a gorgeous interface and the makers just came out with a new update that makes it even better. It’s the most powerful desktop search app you can find for Mac and it doesn’t cost a cent. 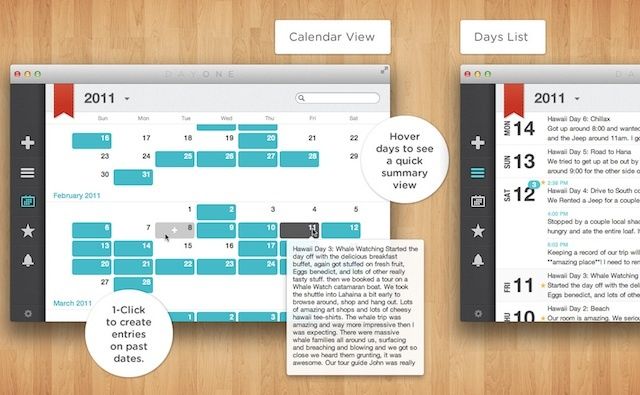 As I’ve gotten older, I’ve realized that I absolutely suck at remembering all the little details of life. Maybe I’m losing memory, or perhaps my brain has already losing storage space, but Day One has been the best journaling app of 2012 to help remember stuff.

Day One is a simple new way keep a journal everything. You can jot down your thoughts and memories really quick and have them all synced with your iPhone via iCloud. Whenever I have a story idea I can type it out in my iPhone when I’m away from my house and it’ll be back on my Mac when I get home. There are tons of features packed into Day One that make it one of the best new writing tools of 2012. 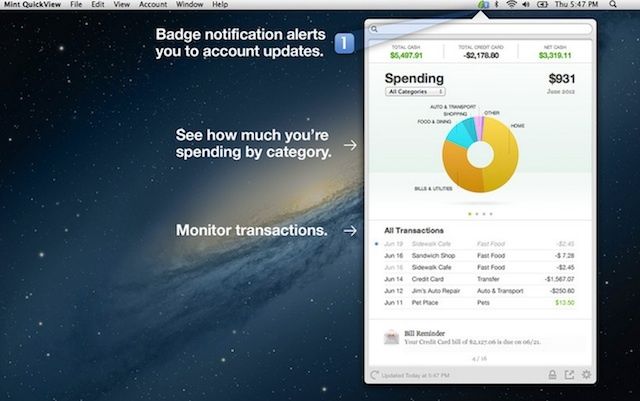 If one of your goals for 2013 is to save more money then Mint QuickView is a must-have app. You’re probably familiar with Mint’s website that keeps track of all your spending, but Intuit created Mint QuickView to make staying on top of your finances even easier.

With Mint QuickView you can see all of your Mint.com info right on your desktop without opening up your browser. You can see not only how much money you’ve spent, but also get a breakdown of your spending based on categories and plan your budget. Everything is password protected so you don’t have to worry about anyone snooping on you. The service is easy to use and completely free so you should probably download it so you can stop spending all your cash on 99 cent games. 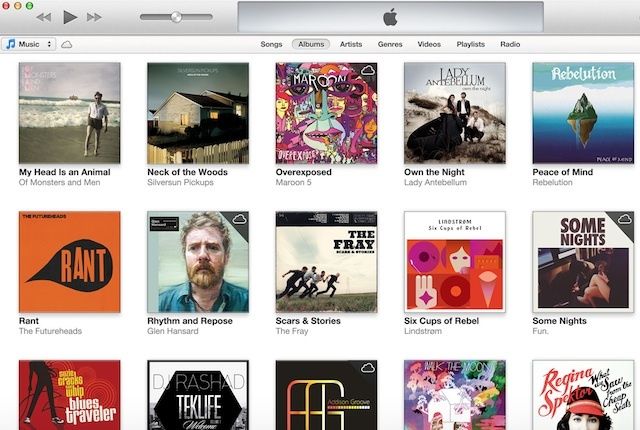 Technically, iTunes isn’t new in 2012. It’s been around forever, but with the release of iTunes 11, Apple’s media monster is starting to feel a bit new. With iTunes 11 Apple has finally started to tame their multi-headed beast by simplifying the interface so that superfluous features get out of the way.

iTunes 11 is the biggest improvement we’ve seen in years. It’s simpler, faster, and stronger. The design is clean and more intuitive. The new mini player is excellent. Apple needs to add streaming feature for iTunes to become as dominant as it used to be, but 2012 was a step in the right direction. 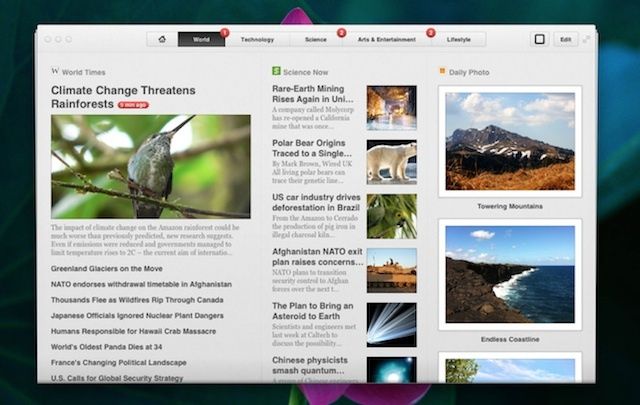 You add your favorite news sites into Pulp and it churns out a newspaper for you everyday. The app is completely customizable. You can add stories based on trending topics, save interesting articles to read later, import your Google Reader feed, and have everything integrated with iCloud. The app was recently enhanced for Retina displays, making it one of the best ways to get news outside of your browser. 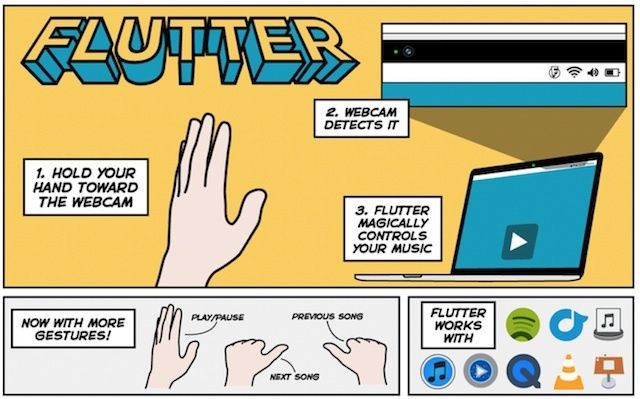 The coolest thing about the Microsoft Kinect is that it makes your feel like a freaking Jedi. Apple has been slow to jump on the motion control bandwagon, but that didn’t stop some clever developers from taking advantage of Apple’s built-in webcams and implementing their own crazy motion control technology. Enter Flutter – the OS X app that lets you control all of your music without having to ever click a mouse.

Flutter is a free, lightweight Mac app that uses your Macs built-in webcam to capture motion commands that will play or pause music while you’re busy working in other apps. The app circumvents the need to multitask over to your music apps to pause your beats when you get a call or need some silence to go into extra-concentration mode. It’s not as quick as using a trackpad but it’s one of the neatest apps we saw in 2012.