Chances are you’ve heard of a game that’s like Words with Friends mixed with Scrabble and SpellTower. It has been taking Game Center by storm, and it’s called Letterpress.

Developed by Tweetie’s Loren Brichter, Letterpress is good, simple fun. But that doesn’t mean it can’t be tricky. Unless you’re a wordsmith and decent strategist, it can be difficult to efficiently use all of the letters on the game’s board to your advantage.

Here’s how to master (and yes, even cheat at) Letterpress:

This sounds obvious, but word games require strategy. It’s not just about being a human dictionary, although that certainly helps. Wired spoke with Loren Brichter about outmaneuvering your opponent:

“There are easy boards with E’s and S’s which are quick bouts, and tough boards where sometimes the most valuable play is making sure an X stays claimed in a corner,” says Brichter. “Sometimes you need to tempt your opponent to play a word, because you know there are an odd number of variations on it that will leave you with the most letters in the end.”

Game designer Raph Koster has a four-step process to winning each match:

Letterpress is based on colored tiles that are claimed by each player with each submitted word. It’s about more than coming up with big words. But if you’re having trouble with forming vivacious verbiage, then you may want to resort to good old fashioned cheating.

Be Dirty And Use Cheaterpress

Yes, there is an app solely dedicated to cheating at Letterpress. Cheaterpress uses the Letterpress word bank to give you a list of all the playable words for each match board. 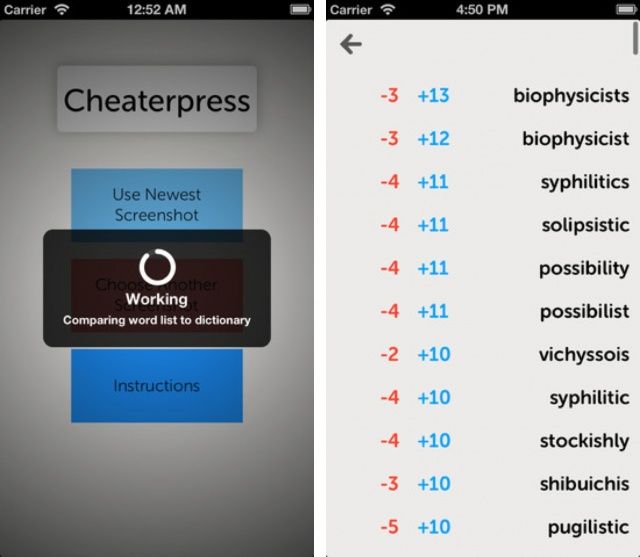 The way the app works is actually pretty smart. Just take a screenshot of a game, and upload it in Cheaterpress. The letter tiles will be analyzed and list of words with their corresponding point values will be generated.

Cheaterpress is available in the App Store for $1, and it works on the iPhone and iPad. With the four strategy points listed above and Cheaterpress, you should be able to totally own your friends and make them think you’re crazy smart. But don’t be annoying about it. Eventually they’ll catch on when you keep using words like “vichyssois” and “shibuichis.”