Earlier this year, Realmac Software and Impending released Clear, a bold and innovate to-do list app for the iPhone. Despite the seemingly never-ending supply of task managers in the App Store, Clear managed to set itself apart with its unique interface, gestures and clean design.

Fast forward to today, and Realmac Software is bringing Clear to the Mac. How does such a gesture-driven app live and breathe on the desktop? On the Mac, Clear is a fresh and enjoyable way to manage tasks. It’s apps like Clear that show the convergence between iOS and OS X.

“meticulously crafted for the modern desktop”

At first glance, Clear for Mac looks like an identical port of the iPhone version. That may be the case for the overall look and feel, but Clear for Mac isn’t a lazy hack job of an iOS app—it has been meticulously crafted for the modern desktop. 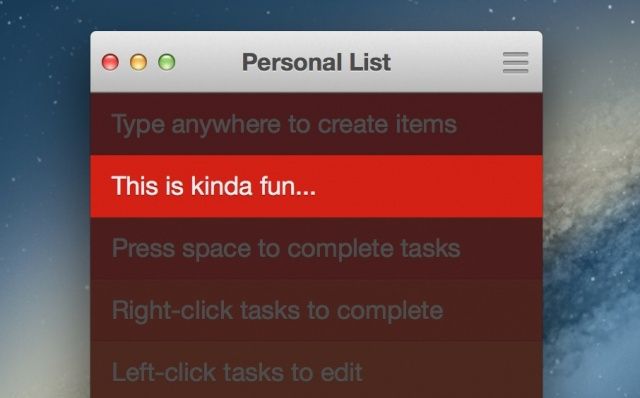 I wouldn’t recommend Clear without a trackpad or Magic Mouse. Everything is gesture driven to the point where it feels like the Mac’s trackpad becomes a mini touchscreen. You scroll up to create a new task, but switching to and from list view requires a quick scroll up with a hold. Click and drag on tasks to re-order them within a list. Swiping from right to left on a task deletes it, while swiping from left to right completes it with a little checkmark. You can also hover over a task with your mouse and hit the spacebar to complete a task.

My favorite part of Clear for iPhone was the ability to pinch to close and expand lists. The Mac app features the same navigation gesture, and it’s still a joy to use. It’s almost addicting to watch the tasks collapse on top of each other as you pinch them together or flick them apart. The animations in Clear are absolutely fantastic, and learning the interface feels very intuitive. For instance, you can start typing randomly and the app will intelligently create a new task below the item you’re currently hovering over with your mouse. It’s a super fast way to enter new tasks, and I wish more apps adopted it.

Like the iPhone version, there are several themes to choose from. Each has a different color palette, and there should be something for everyone.

On the Mac side of things, Clear includes a preferences pane that enables the menu bar icon, dock badges, sound effects and iCloud. Clear for iPhone was updated earlier today with iCloud sync for good reason; now all of your tasks will be instantly synced between your devices. It works great.

Clear for Mac is available in the Mac App Store for an introductory price of $6.99. The price will soon be raised to $14.