Shared Photo Streams came along with iOS 6, allowing us all to create our own little photo sharing social networks using nothing more than an iCloud account and our iOS devices. Creating and sharing Photo Streams is dead-simple, but managing some of the more non-intuitive features, like comments and subscribers, can be a bit tricky for the uninitiated.

We took a look at these new features and put together a guide on using Shared Photo Streams to help you get the most out of your iPhone, iPad, or iPod touch when creating and sharing your photos with your friends and family.

Share Your Photos Only With People You Want To

It’s all really amazing and fun, of course, but what about those times we just want to share our photos with a select group of friends or family members? Setting up special lists in Facebook or Flickr can be unintuitive and tricky, so chances are good that it doesn’t happen that often.

Luckily, Apple’s got shared Photo Streams in the new iOS 6, and it’s fairly straightforward to set up.

Now, tap on the Photo Stream you created and then tap on the Edit button in the upper right fo the Photo Stream screen. Tap on Add at the bottom, there, and then choose the photo or photos you want to add to the shared Photo Stream. Tap the Done button when you’re finished, and you’ll finally have a way to share photos you’ve taken with specific folks that you choose to. When you want to add more, simply tap the Edit button again, and Add more photos to the shared Photo Stream. The people you’ve shared with will see the new additions on their devices, as well.

Invite (Or Un-invite) Subscribers From Your Shared Photo Streams 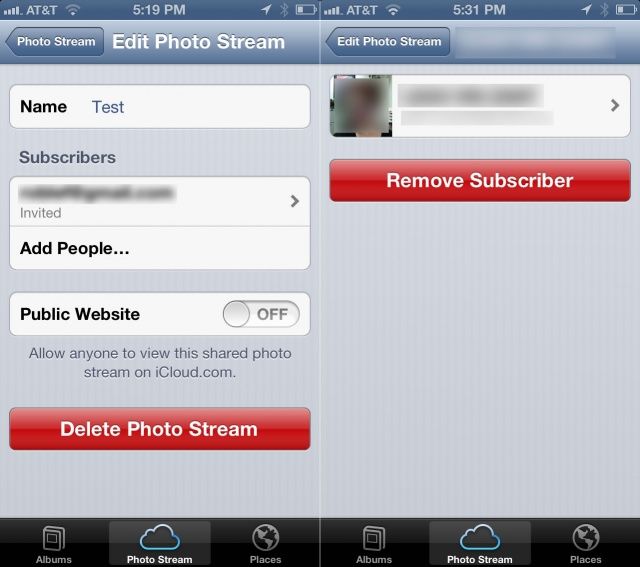 We got a couple of comments on our tip about using shared Photo Streams on iOS devices. One of them was how to add new people to a Photo Stream once it’s been created. It’s fairly unintuitive (Apple, are you listening?), so here’s a quick step-by-step on how to do so.

Next, to add a new person, tap the Add People… section below the list of other subscribers and either add a person from your Contacts via the little blue button, or just type in an email address. Then tap the Add button in the top right corner.

If you want to delete a subscriber, tap the name of the person you want to remove in the list of subscribers, then tap the big red Remove Subscriber button. Boom! They’re gone.

Subscribers can only view or comment on the pictures with shared Photo Streams, on their own iOS devices or on the web. Hopefully, Apple will add a way for subscribers to add photos to a shared stream, as well, which will make the whole thing much more useful for groups who want to share among themselves.

How To Delete A Comment From A Shared Photo Stream 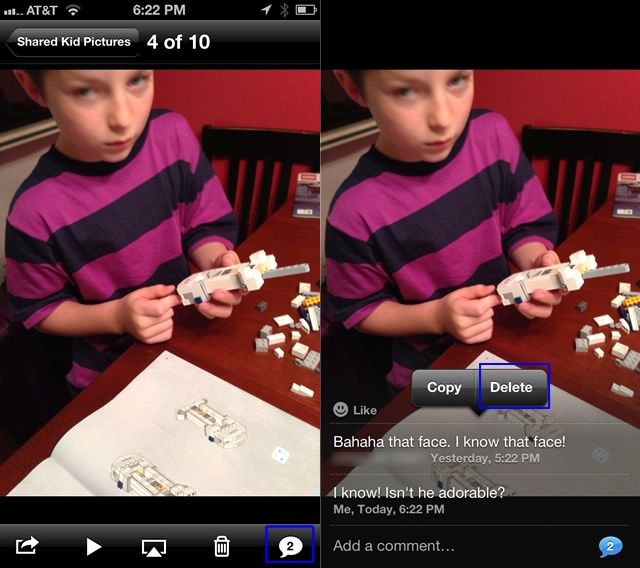 So, if shared Photo Streams are like little photo social networks that contain only the people you invite, comments should never be a problem, right? Well, I don’t know about your friends and family, but mine can be both irreverent and irregular in their commenting activities. That’s why it’s handy to be able to delete comments that the original Photo Stream poster doesn’t want any more.

Here’s how to get rid of those commenting curiosities.

Shared Photo Streams are fantastic, of course, barring the niggling detail that only the person who creates them can add photos to them. Sometimes, though, as with all tech, things don’t necessarily work the way they should. For example, sometimes you won’t be able to see comments that have been posted by subscribers. Other times, deleting a comment from a shared Photo Stream via iPhoto or Aperture won’t be reflected on your iPhone.

Here’s how to fix that.

First, if you’re having a comment sync issue, check the System Status notification on the iCloud Support webpage. If iCloud is down, there’s no amount of troubleshooting you can do. Just wait it out.

Second of all, make sure you’re connected to the internet. Sounds silly, but it can happen. Check your connection by launching Safari and going to a site that’s up all the time, like apple.com or google.com.

If all of the above is fine, follow the steps Apple suggests, below:

If all of that still doesn’t work, email Apple support and see what they have to say about the matter.