The first thing you notice about the 2012 fifth-generation iPod touch is how beautifully it’s made. Crazy thin, ridiculously light, yet sturdy as a slab of slate.

The fit and finish are extraordinary. There are no seams, screws, gaps, cracks or openings. It’s literally seamless. The buttons look like they’re part of the iPod’s case, not nubbins that poke through. Who makes stuff this good? Oh yeah, Apple.

Other reviews have complained about the price (it starts at $300) and some reviewers seem unimpressed by the touch. Who is it for, they wonder? Especially if you already have an iPhone.

Well, it’s for the kids. It’s a kids’ computer. Their first computer, if you like. It’s a relatively cheap, highly portable, extremely capable little handheld computer for children. It plays games, music and movies; surfs the net; communicates via text and Facebook; and hosts a bazillion apps for entertainment or homework. It also displays e-books, though let’s be honest: reading is the last thing it’ll be used for. 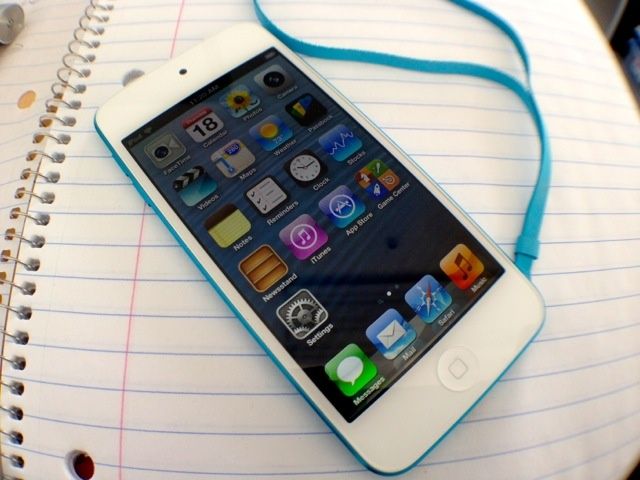 My 12-year-old son dragged me out to the Apple Store on Wednesday night to buy the new iPod touch with his own hard-saved cash. He bought a 64GB model ($399) with money he’s been saving for years (birthdays, Christmas, and pilfering my pockets).

I tried to talk him out of it. He just got his first iPhone — a 3GS hand-me-down. But the little ingrate hates it because it’s “old and crappy.” He wants the latest and greatest, just like the rest of us.

After I made him load the dishwasher, sweep the floor, make me tea and clear out under the deck with his brother, I took him to the mall. On the way, I tried a different tack. I talked to him about using his money to maybe upgrade his 3GS to an iPhone 4 or 4S, or even the 5. That way he wouldn’t have to take care of two devices.

But he said a brand new iPhone was “too much responsibility.” He didn’t want to lose it or get robbed (he takes San Francisco’s city buses). The iPod touch could stay at home, safe and sound.

My son wanted the touch for the better camera. He’s an Instagram fan. Plus it’s drop dead cool. The hardest decision was the color.

For the first time, the iPod touch comes in a range of eight colors: pink, yellow, blue, green, purple, silver and slate or (Product) red. He wanted black or slate but the store had already sold almost all its stock. They only had blue, so he took it.

He was so excited, he unwrapped it in the store and started setting it up immediately. He got a huge kick out of the camera’s LED flash. He downloaded a flashlight app in the store and shone it in my face all the way home as I drove down the freeway. He also loves the wrist strap. We both got a big kick out of how the strap’s attachment post pops out of the back when you push it in. Like everything else, it’s well-engineered and precise, even on a throwaway feature like this. But why make it easy when you can make it great?

If I’m honest, he’s going to use it mostly to play games. But he will also use the calculator for math homework and the browser for research. He’s already loaded iTranslate to help with his Spanish homework. He’s interested in using it to create: he’s loaded Instagram and iMovie. 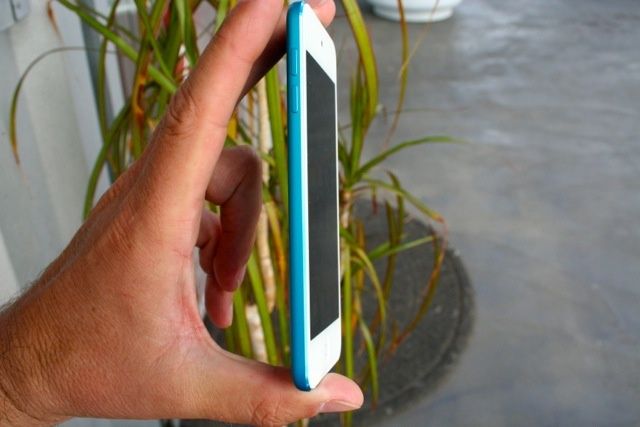 The new touch is a gleaming jewel. The front is a 4-inch sheet of glass with a colored bezel around the sides. The back of the iPod is made from anodized aluminum. The metal feels smooth and warm. The shiny machined bezel gleams like a knife edge.

It’s mad thin and very light. But it’s solid. It feels like it’s been strongly compressed together, squished tight. It’s a solid metal and glass sandwich. Everything is ultra precise.

It would be better if it was priced like the older touch, or even better at $200, which would make it almost an impulse buy. But consider that a 16GB Nexus 7, the roughly equivalent Android device, is $249 for half the capacity, and only $50 less. 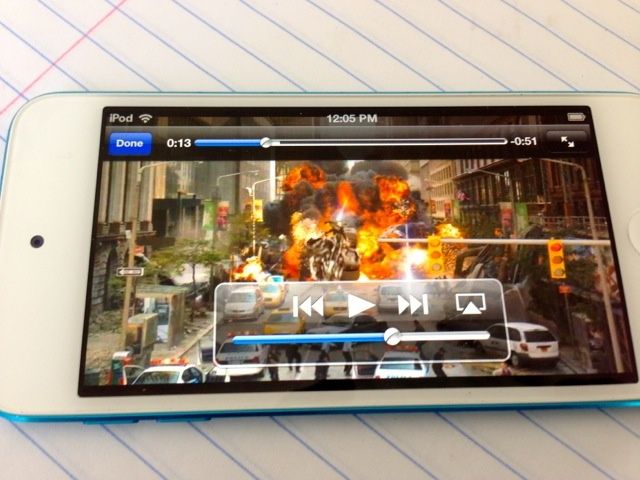 The new 1136×640 screen measures 4-inch diagonally. It’s a Retina display, and it’s certainly bright and beautiful. It boasts a higher resolution than its predecessor, and a better contrast ratio and color fidelity. It’s not clear if this is the same screen as the iPhone 5, currently the gold standard in mobile screens, but side-by-side with the 5 it’s hard to tell the difference.

Like the iPhone 5, the new touch is suited to the 16:9 widescreen ratio. It can play 720p high-definition video, and HD movies from the iTunes Store look great. 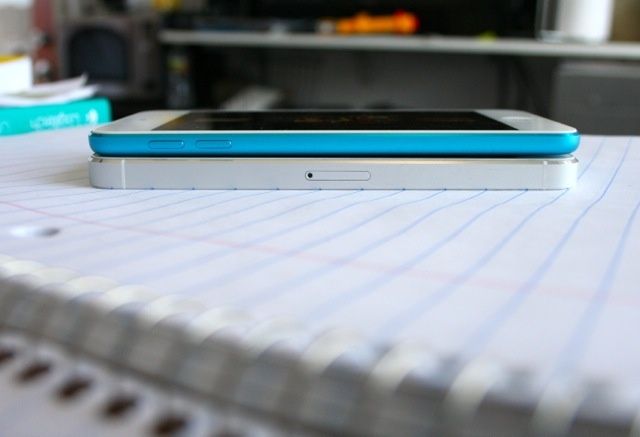 The new touch is almost identical in size to the iPhone 5, but is considerably lighter and thinner. It’s taller than the old touch but about the same width and thickness.

The aluminum shell is a big improvement on the old stainless steel case. It’s not clear if it will stand up to scratches any better, but it’s certainly more resistant to greasy fingerprint smudges.

On the back, there’s a small, black plastic tab at the top for the Bluetooth and WiFi radios. WiFi is dual-band 802.11n, like the iPhone 5. The new radio should improve speeds by getting it off the overused 2.4GHz band. I didn’t run any benchmarks, but the touch connects easily and downloads are fast.

In the opposite bottom corner, there’s a pop-up tether for a wrist strap. It’s a great touch. Pity the wrist strap is not also available on the iPhone. The tether sits flush until you press it and it pops up, and the strap hooks onto it. It’s surprisingly secure for shooting pictures or video.

The volume buttons are lozenge-shaped, not round like the iPhone’s, and are easy to find and manipulate sight unseen.

There’s only one speaker on the bottom. It’s not great but it’s adequate. It won’t rock the party but it’s perfectly fine for ringing alarms or watching a movie.

The headphone jack is also on the bottom, just like the iPhone 5. Though controversial on the iPhone, a jack on the bottom makes sense, which is why the iPhone now matches the touch. And when the iPod’s sitting in your pocket, its orientation makes no difference. 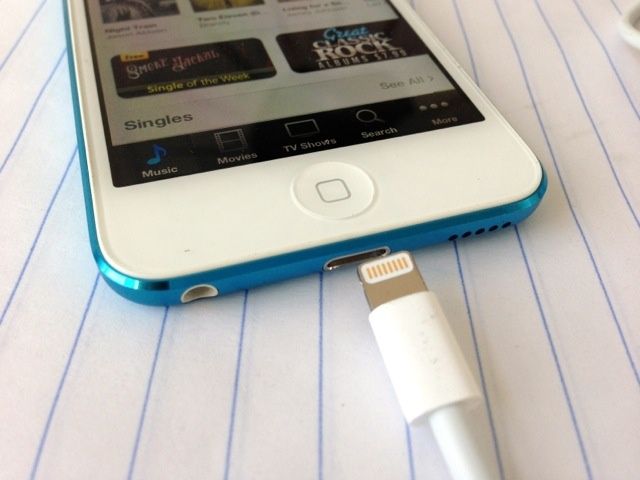 The new Lightning cable, which replaces the old 30-pin dock, is causing a lot of consternation. Eveyone is complaining about their old, useless accessories and charging docks. But frankly, the new connector is a vast improvement. It’s positively minute, yet the cable plugs in with a satisfying click and doesn’t feel at all flimsy. It’s hard to damage and doesn’t attract a lot of dust bunnies and gunk. Like I said — a vast improvement.

I’m a fan of the new EarPods, which are comfortable and sound a lot better than the old earbuds. There’s a lot more punch and low-end. Unfortunately, the iPod touch EarPods are missing the remote and built-in microphone that are included in the iPhone set (and the $30 set sold at Apple’s stores). Still, they sound pretty great.

Siri is the biggest software addition to the touch. She does everything she does on the iPhone and new iPad: opens apps, sends tweets, initiates FaceTime calls. I played around with Siri a bit and found her as responsive and useable as she is on the iPhone — hit and miss, in other words. I’m trying to be patient with Siri and feel that if I master the system, she could make a huge difference in the way I interact with my devices. If you’ve got something urgent to do though, she can wear your patience thin.

The touch also gets Apple’s new Maps app, including the awesome 3D flyover feature, which renders certain cities in jaw-dropping, photo-realistic 3D. But there’s no turn-by-turn directions because it doesn’t have built-in GPS, which is a shame.

The touch also gets AirPlay, which beams music to compatible speakers or what’s on screen to a compatible device. AirPlay is an awesome feature, turning your handheld into a personal media hub that can interact quickly and easily with your TV or stereo. I’m a huge fan, and it’s inclusion in the touch is a big win. The touch also gets AirPlay Mirroring, which is great for playing games on the big TV (assuming you have an AppleTV attached).

The touch is a snappy little blighter. It has the same Apple-designed A5 SoC (system-on-a-chip) as the late model iPad 2, and it’s perfectly capable of running all the apps I threw at it, including fast-moving, complex games. The A5 chip and GPU is twice as fast as the old touch, and it has twice the RAM (512MBytes). I couldn’t detect any slowing down when I had multiple apps open or during complex animations and graphics. By comparison, the old iPod touch was horribly slow. It often bogged down, especially in iOS 5 and 6. 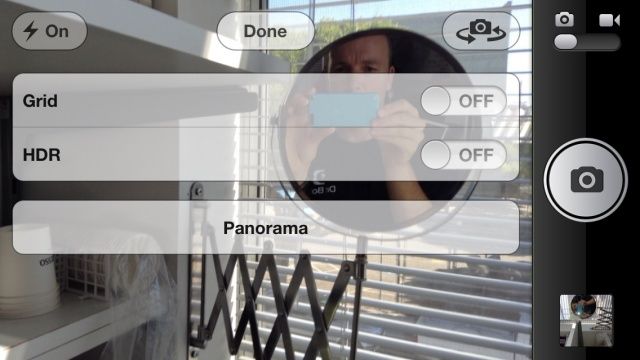 For taking pictures, the new touch is a huge step up from its predecessor. The old iPod touch had a crappy sub-1-megapixel camera with a fixed-focus lens. It was OK for daytime shots but sucked at everything else.

The new touch has two cameras. The front camera is mostly for FaceTime videoconferencing. It’s a modest 1.2-megapixels. The rear camera is a 5-megapixel sensor with a f2.4 aperture and an autofocus lens. Right next to the camera there’s an LED flash and a small microphone behind a tiny, silver-meshed hole.

It can shoot 1080p video at 30fps, which looks bright and clear and stunning, even when viewed via AirPlay on a high-definition TV.

Still pictures are good to great. Autofocus makes a big difference and in most cases the camera locks on target and stays there.

Color is true and the touch does a reasonable job of getting the right exposure. Low light shots are noisy, but so are most cameras’, and it captures a surprising amount of detail.

There’s no optical zoom, digital zoom is beyond awful, and there is no manual control whatsoever. Nonetheless, the touch is as good if not better than many point-and-shoots, and it’s positively great when compared to a lot of smartphone cameras. For convenience, it can’t be beat.

The iPod’s camera app is now identical to the iPhone 5’s. It features the sweeping Panorama mode, which creates a widescreen immersive photo as you sweep the camera around you. There’s also HDR, which combines high and low exposure to create eye-grabbing shots with wide dynamic ranges.

Sharing Photo Streams is a slick new addition to iOS 6 that the touch puts to good use. It’s very easy to create a private stream of your photos and invite others to automatically view and download them. Shared Photo Streams show up in the invitees’ iPhoto and iOS Notification Center, and I was able to subscribe to my son’s pictures with just a couple of clicks.

Apart from the screen, the biggest internal component is the battery. The iPod boasts a 1030mAh internal battery, up slightly from the previous iPod. Apple says it’ll provide 8 hourse of general use and up to 40 hours music playback. That’s an entire week’s worth. In my testing, which wasn’t particularly rigorous (we just played around until the battery ran down), it lasted about eight hours, in line with Apple’s claims.

Boo hiss: The iPod touch has no built-in GPS, which means no turn-by-turn or tracking in fitness apps.

There’s also no light sensor to dim the screen in low light, a victim of the touch’s thin profile, according to Apple’s Phil Schiller.

In most important respects, the new touch is just like the iPhone 5, without the phone. It has most of the great features, without the expense, especially the monthly plan.

If you think of it as a glorified music player, then the $300 starting price tab looks expensive. But think of it as a starter pocket computer for a kid, and its relatively cheap. It’s a third of the price of a Mac laptop.