Owners of the new iPod Touch may spend a lot more time manually updating the brightness of their device because, unlike previous models, the iPod Touch doesn’t have an ambient light sensor or auto-brightness settings.

After checking the iPod Touch spec sheet, we found out yesterday that Apple left the sensor out on purpose. Why did they ditch it when users have come to expect it? According to a purported email from Apple VP Phil Schiller, the iPod Touch was just too dang for them to fit it in.

In an email posted by iDownloadblog, an iPod Touch owner emailed Phil Schiller asking why there isn’t an auto-brightness setting on his new device. Schiller responded,

“Thank you for purchasing a new iPod touch. It is a remarkable device! The 5th generation iPod touch does not have a built-in automatic light sensor (it’s just too thin!)”

While we can’t verify whether the email is actually from Schiller, Apple VPs are known to respond to customer emails from time-to-time. Schiller’s response also corresponds with our theory from yesterday that Apple left out the ambient sensor because the new device is too thin, or to save space and cut costs. 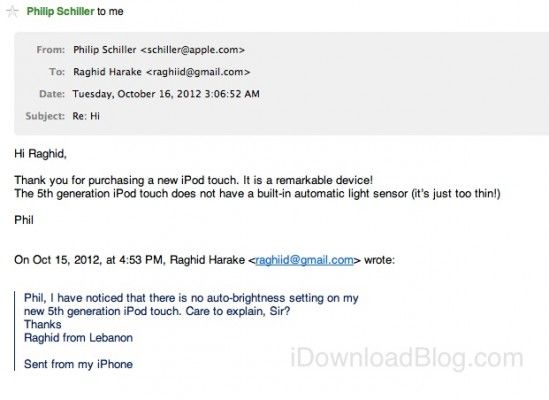