COM: You are also the founder of the Atlanta Historical Computing Society?

Yes, but I founded the “Historical Computer Society” before that. Basically, my fascination with the Lisa and its history turned into an interest in the history of Apple, then to personal computers, and finally to computer history in general. I started reading anything I could get my hands on.

Around 1992 I had the idea that I would like to start collecting computers and maybe start a user group for people like me, but I was in the US Army and stationed in Germany, so it wasn’t until I transferred back to the States that I really got started. In March of 1993 my wife and I transferred to El Paso, Texas and I formally created the Historical Computer Society. I publicized it in the computer classifieds on CompuServe and on AOL. This was before the “Information Superhighway” and the Web so I decided to create a newsletter. Thus was born Historically Brewed, so named as a play on words: the earliest personal computer hobbyists “home-brewed” their own computers, and the famous user group in California was called the Homebrew Computer Club. 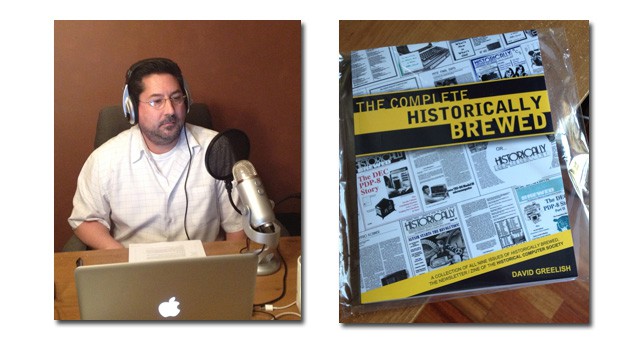 The first issue of HB is free to read online. I ended up publishing nine issues and the subscription base grew to over 500 people. There is much more to the story, but to keep it short let’s just say that life sometimes gets in the way. By about 1997 publishing stopped and the HCS faded. I had the idea to start a physical user group version of HCS a few years ago, but I didn’t have success until after moving to Atlanta in 2009. It has now been about two years since I founded the Atlanta Historical Computing Society (AHCS), and we have a small but active membership that’s growing.

COM: You co-host several podcasts, the Retro Computing Roundtable and Not Another Apple Podcast?!, write the Classic Computing Blog and speak regularly at conferences and events. That takes up lots of time. Is this your full-time profession?

No, but it is my intent to make it my profession. Again why I now actually call myself a Computer Historian. It is my passion and it’s what I want to do with my life. I love the history, the hardware, software, and the stories of the people involved. I love writing and talking about all of that, and it is a dream of mine to one day make it a career. I want to be a curator, giving talks and also leading walking tours at a computer museum. Currently, I make a living as a systems admin at an ad agency. I am a Mac and PC technician.

Yes I am, and it is very exciting for me. There have been a number of different VCFs around the country, with the original VCFs organized and produced by Sellam Ismail and held in California from 1997 to 2007. I have attended that event once in 2006, and I have been to the VCF East in New Jersey and the VCFMW in the Chicago area. Information about all of the VCF shows can be found at vintage.org. I’ve thought about trying to create a show in the southeast for many years, but it wasn’t until relocating and getting the AHCS off the ground that it seemed feasible.

My group is cosponsoring the show along with a private collector here, Lonnie Mimms. I believe he has one of the largest personal collections of computers anywhere. The VCFSE venue will be somewhat of a proving ground for him to launch the Computer Museum of America (CMA). He will be showcasing his extensive collection of Apple computers in a professional display at the show. We will have exhibitors, vendors and speakers, but also vintage game stations and a retro computer kit building workshop. The show will be held on Saturday, February 9, 2013 from 10AM – 7PM.

I can honestly say that I have owned just about every significant American personal computer ever made.

COM: Supposedly you once had a very large vintage computer collection, but subsequently downsized. What items did you let go, and what do you still have?

I can honestly say that I have owned just about every significant American personal computer ever made. Over the years my family has grown, we have moved a number of times, and I even have had to sell some computers here and there for financial reasons. One time in 1998, at a particular upswing in the values of classic computers on eBay, I sold my IMSAI 8080 for well over $2,000. That money repaired the transmission in our car, and we then moved to Virginia for a new job I had just acquired.

Some other items that I have let go over the years include an Altair 8800b turn-key, Processor Technology SOL, CompuPro 816, NEC APC, numerous generic PC clones, numerous older Macs, large printers, Lear Siegler ADM-3A display terminal, Osborne 1, numerous Kaypros, IBM PC, TRS-80 model III, 4 and 4p, numerous Commodore, Amiga and Atari models – just too many to remember. Some I sold, and many I gave away, to either people or to thrift stores where I knew they would be sold and not destroyed. I’ve had to make tough decisions over the years and even recently as to what to keep.

I feel it doesn’t do me or anyone else any good for things to just sit in my garage and gather dust. It was about ten years ago that I mostly stopped collecting desktops or laptops and mainly focused on the much smaller handhelds, palmtops and PDAs.

I’m sure I’m forgetting a few. Here are my handhelds, palmtops and PDAs:

Sharp ExpertPad (their version of the Newton)

Casio Zoomer; Tandy ZPDA (their version of the Zoomer)

I know I’m forgetting a few here too.

COM: Focusing on handhelds might be a good idea. Mobility is the future, and they take up much less space. I have the same dilemma with my Vintage Mac Museum, which now inhabits many rooms of my house.