iOS 6 is spreading like wildfire across Apple’s iDevices. Within two days of its release a quarter of all iOS devices had adopted Apple’s newest mobile operating system, and its use continues to grow. Chitika Insights has released their new data on iOS 6 adoption rates and they’ve found that 60% of iPhone users have already installed iOS 6, but only 39% of iPod touch users are on the new iOS.

Chitika’s adoption rate numbers come from a sample of millions of mobile ad impressions coming out of the Chitika ad network from September 18th to October 1st 2012. The growth rate of iOS 6 was then split up by device and compared to the total iOS web usage.

iPhone users have adopted iOS 6 the quickest, with iPad owners not far behind with a 45% adoption rate. The slower iOS 6 adoption rate with iPod touches is probably attributed to the fact that first and second generation iPod touches aren’t able to upgrade past iOS 4.

Even though iPod touch users have been slow to upgrade to iOS 6, the new mobile OS has already become the most popular version of iOS currently in use despite its infancy. 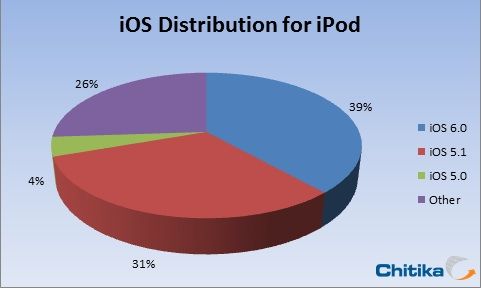