The iPhone 5 is almost upon us, and Apple has mandated that all third-party developers start submitting iPhone 5 screenshots in the App Store. Devs with new updates must include screenshots optimized for the iPhone 5’s 4-inch, 1136×640 display.

Many popular App Store apps have already been updated for the iPhone 5 and iOS 6, including the official Facebook app today. There were original concerns that developers wouldn’t have time to get their apps up to date for the iPhone 5, but it looks like updates are rolling out at a fairly rapid pace.

The new screenshot resolution requirements are:

If you deliver a new app binary that takes advantage of the new screen size for iPhone 5 or iPod touch (5th generation) without screenshots in the new dimensions, the status of your app will change to Missing Screenshot. Your app will not be reviewed until you upload screenshots with the correct dimensions. You will also need to upload screenshots for any added localizations you have set up on iTunes Connect. 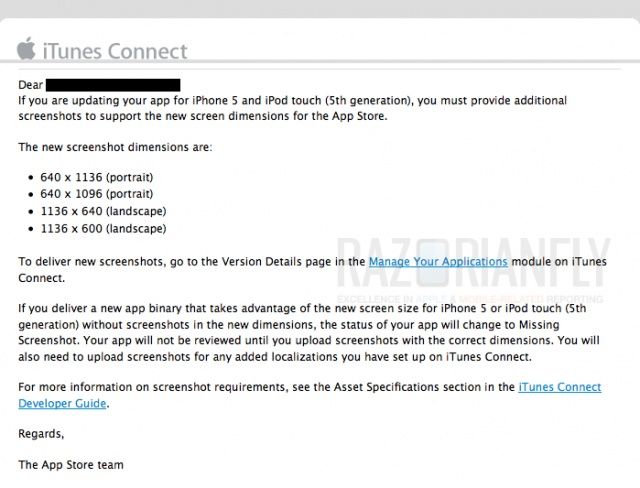 If an app is not optimized for the iPhone 5’s taller display, the app will be centered with black letterboxing.

Number of comments on this postLeave a comment
Posted in: News Tagged: App Store, iPhone 5, screenshots