It seems like just a few months ago the choices for blogging from the iPad were limited in both quantity and quality, with the best apps (like Blogsy) often heavily flawed, and the worst apps (the then-available WordPress App, for example) being unusable.

Now, we have an embarrassment of options. And ironically — for WordPress users at least — you can now post images into articles direct from mobile Safari (in iOS 6), meaning you mightn't even need an app after all.

Poster is handsome. The default font, called Oxygen, can be seen in the screenshot above. You can pick from a small range of other fonts (and adjust the brightness and font size) in a small drop-down. But that's not the meat of this app.

First up, Poster supports Markdown. That means you can either work in the app's editor in Markdown, or you can import a Markdown file into the app, and it will be converted to HTML on publishing. This alone is fantastic, letting you keep all your work in human-friendly format without having to add yet another plugin to your WordPress installation.

TextExpander is also supported, which is especially helpful as Poster has no Markdown keyboard row on top of its normal keyboard. It also lets you wrap the images with code for captions — also not yet supported in Poster. 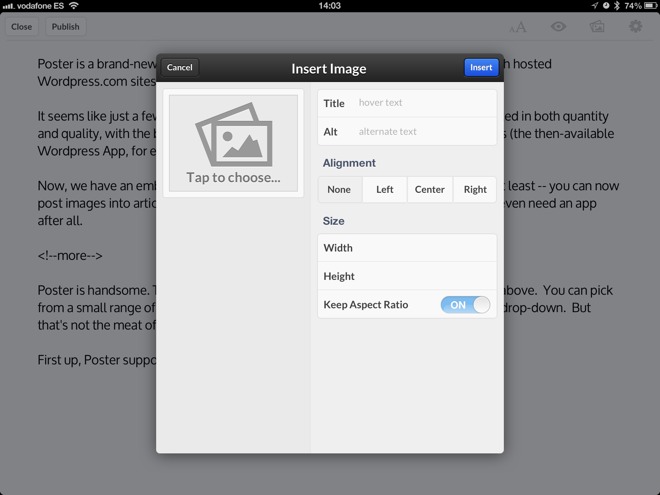 Talking of images, the uploading sheet is great. It lets you resize images before uploading, like others (Blogsy is a great example of image uploading), and it even lets you make images bigger along with preserving the picture's aspect ratio. But the real killer is that it will also convert your images to JPGs upon upload, letting you insert screenshots without a round-trip to Photogene.

Even Blogsy, the king of picture uploading, doesn't do this.

Tags, Categories and scheduling are all there, as is a very pretty preview (great for checking your Markdown before hitting publish.

But there's one final feature which will blow you away. Actually, it's more like two features, and they'll only amaze you if you're a blogger who churns out many posts a day: Poster supports the iOS "Open In…" feature, and can also open Markdown files from Dropbox.

An example: Usually I write my posts in Writing Kit (in Markdown), convert and copy the HTML to the clipboard, switch to Blogsy or WordPress, paste the code and add all the metadata and images.

Now I can write in Writing Kit, and then choose to "Open In…" Poster. A new post is created with the raw Markdown in place. I can add all the pictures and metadata right here, and even wrap the images in caption code using TextExpander.

For me, this is just about ideal, and I look forward to future versions of Poster adding support for captions, and maybe a Markdown-specific keyboard row. As it is, I love the existing features, and especially like the little touches like the ability to open a published post in Safari, and to tweet the post after it's done.

Right now is a great time to be an iPad-toting blogger.