The iPhone 5 and the iPot touch both got a revamp today, as announced at the Yerba Buena center in San Francisco. They both have a new look and a new screen size. The 4 inch diagonal screen is at the same ratio of 16:9 as most HD movies, for one. But what about gaming? Everyone knows how great iOS is for gaming, right? What will the extra length bring to the party? Let’s take a look.

On the one hand, there will be more space on the new iPhone 5 screen. That in and of itself is a good thing for gaming. If nothing else, it gives developers an extra 176 pixels to put virtual buttons in, say, or show more of a playing field. Or, as in the example shown during the Apple keynote today, add rear view mirrors to the Real Racing 3 cars.

And what about developers from more traditional handheld gaming devices, like Sony’s PlayStation Vita? That device has a 5 inch screen, with a 16:9 ratio, making the possibility of moving from the Vita to iOS much more likely, barring any exclusivity or contractual obligations. 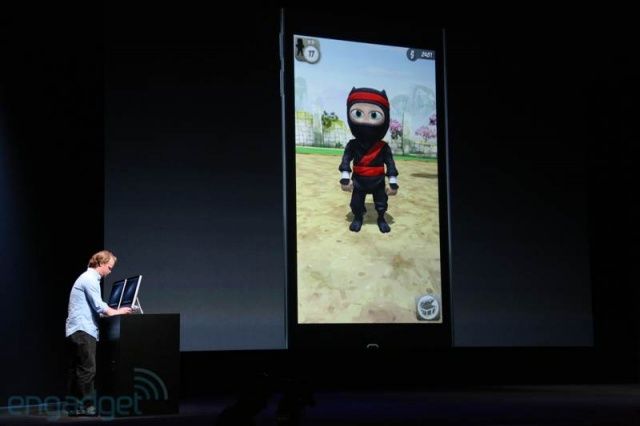 The downside of a new screen size is, of course, that developers have yet another screen size to deal with. While the transition from older iPhones including the 3GS, 4 and 4S to the newer iPhone 5 will most likely be quick, there will still be a ton of people playing on older devices. Especially, I’d venture to guess, kids who get the older phones as their parents upgrade. Kids drive a lot of game purchases in my household. This fragmentation of screen resolution and ratio has got to be a bit of a headache for developers.

All older games will run letterboxed, of course, but gamers are a fickle lot and will want their habit full-screen. How will Universal apps work, now? The iPad isn’t a 16:9 screen by any means, so how wil developers create a full screen experience on both devices? Do we now face a day when developers are essentially encouraged to create two different apps for iPad and the new iPhone? The reverse is also true – how will new iPhone 5 apps run on an iPad? Will they squish up or run letterboxed, like movies do on older TVs? Will they run at all? for games, this is a concern.

This all could have an effect on the development costs of said games, which then has an effect on the app consumer who owns both an iPad and a new iPhone. It’s a first-world problem, to be sure, but it’s there, nonetheless.

Bottom line, this will most likely be a blip in the overall awesomeness that is iOS gaming. I hope that Apple helps developers transition over to the new screen size, helping with the iPad/iPhone differential for Universal apps along the way.