Ever since the iPad 3’s magnet-reversal killed the ability for my Skech Porter case to wake the screen, I have been looking for an iPad case I can keep on all the time. The criteria are as follows, in no particular order:

The last of these was just a joke, but the New York Hong Kong (NYHK) cases includes it and everything else on the list. In fact, if not for one important niggle (which is the fault of the iPad 3 itself), then the NYHK could be just about the best slimline folio case I have yet tried.

There are two NYHK models, the Shield and the Folio Shield. The former has a rear cover and foldable, Smart Cover style lid. The latter (the one I tested) adds an integral stand. It does this by continuing to unfold once it reaches the spine, allowing the left edge to swing free so you can prop it up thusly: 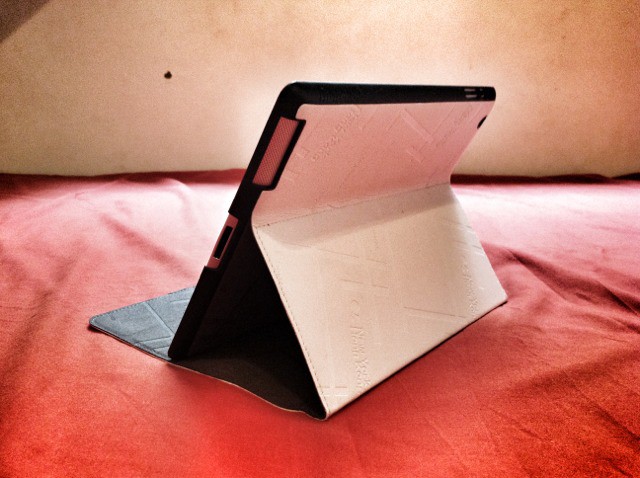 The case is made from a plastic dish to hold the iPad and a leather and microfiber wraparound to form the case itself. And if that sounds like a recipe for a thick and heavy case, get ready to be surprised.

This case is light. As in, 227 grams light, or just eight ounces. This is the same weight as many shell-and-cover only cases I have tested (yes, I weight them all), and comparable to Apple’s Smart Case. And yet it is made of leather, and includes an extra layer of material to make its built-in stand possible. 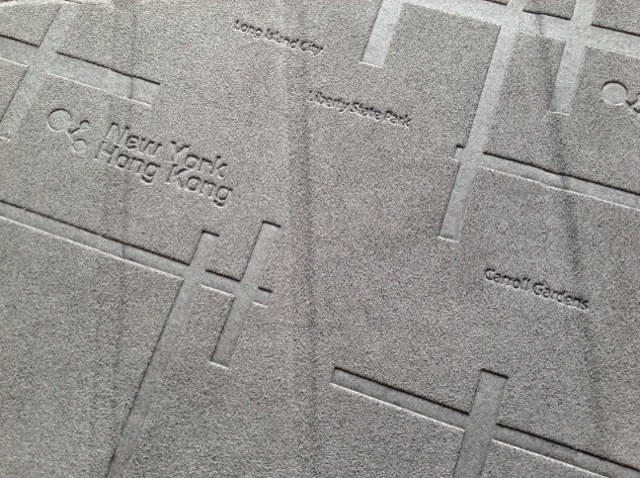 Speaking of leather, the NYHK case has the same quality feel as the Apple leather Smart Cover, and creases handsomely over time. Inside is microfiber to keep the iPad’s screen clean, and both the leather and lining have a rather cool-looking pattern of streets embossed into them. The Lady, however, isn’t impressed by the patterns.

Then we come to the stand, which lets you prop the case up to any angle in landscape mode, and also folds up like the Smart Cover to make a typing stand.

It works very well, and the microfiber of the lining acts as a base, which grips well onto the microfiber-covered edge of the main case, stopping almost all slippage. The wedge-shaped fold is a little too springy for the embedded magnets to keep it closed, but then again you will always have the weight of the iPad on top.

The bad points here are not really bad at all. The plastic shell which cossets the iPad is super-thin, but manages to grip the iPad like an alcoholic holds onto his bottle. Better, actually, as it doesn’t have shaky hands. This also means that it is almost impossible to get the iPad 3 out without breaking a nail.

The iPad 2 is a slightly easier bet, but it’s still not coming out unless you really, really want it to.

The other bad point is — as I said earlier — the fault of the iPad 3. It’s just too hot. My iPad is warm most of the time, partly because I live in a country where it’s always hot, but also because the iPad 3 runs very warm. Putting it in a tight case with two layers of material on the back, and then watching a movie is a recipe for, well, for a well-cooked iPad. I figure that this problem will disappear in the winter, and is already non-existent with the iPad 2, so you should consider this before you buy.

Buy this case. If you like the style, you’ll love the light weight, the quality workmanship and the protection it offers. But most of all you’ll love the price. The NYHK, from Lioncase, will cost you just $43. I’d recommend this case at $100, but for just over $40 it’s a steal.

You can choose from black, white and hot pink, and they’re available now.